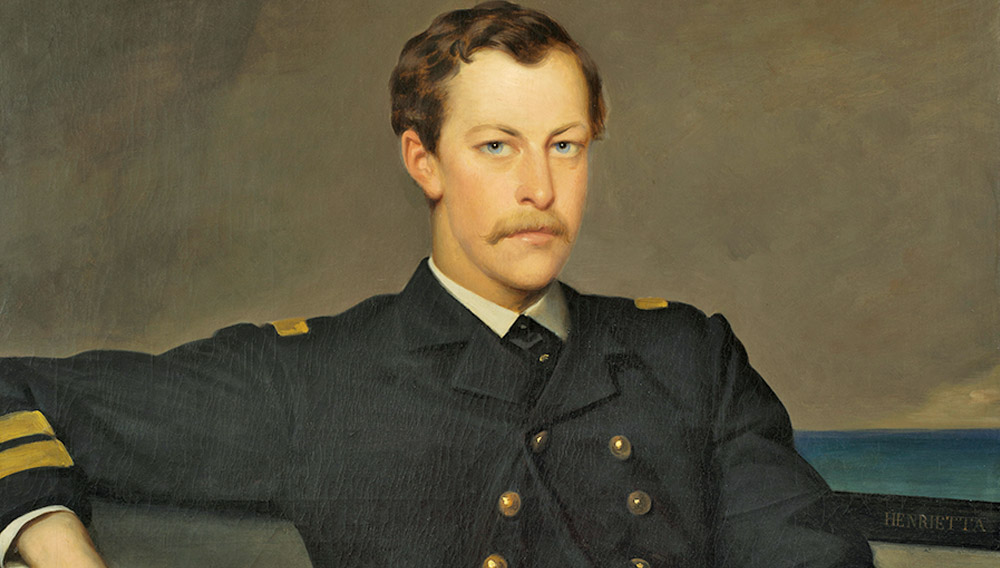 Even the most trivial outing can assume the air of an adventure when certain personalities are present. In the first decade of the 20th century, several aristocratic ladies had ample opportunity to reflect upon this truth when they accepted an invitation to dine on Lysistrata, the steam yacht belonging to the newspaper publisher James Gordon Bennett Jr. (pictured), which was anchored in the port of Monaco.

With its sleek 314-foot hull, the vessel was an object of curiosity, and the women no doubt wished to see for themselves what was rumored to be the most luxurious craft of its time. Among its much-touted amenities were an elaborately tiled Turkish bath, three master suites, and specially padded and fan-cooled quarters for a cow, Alderney, who accompanied her owner on his voyages to provide fresh milk and butter. While the guests enjoyed their host’s hospitality, that gentleman excused himself, and the diners soon realized that the boat was headed out to sea. The captain informed these accidental passengers that Bennett had ordered him to set course for Egypt, and not until the next morning was this instruction abruptly rescinded. Thereafter, recounted Consuelo Vanderbilt Balsan, “Visitors were less easily persuaded to dine on the Lysistrata.”

This episode was not unique in the dubious career of Bennett, the privileged son of the New York Herald’s owner and editor. Educated in Paris, Bennett developed an early thirst for adventure and alcohol, both of which he indulged in the extreme. As one contemporary recalled, “There was a streak of the devil in him,” and indeed, fire was among his many fetishes: In New York, he pursued fire brigades through the streets, dressed in a top hat and tails, flask in hand, barking orders at the firemen, who on one occasion dampened his enthusiasm with their hose.

Seafaring likewise fascinated him, and he commissioned numerous yachts, one of which, the schooner Henrietta, he loaned to the United States government during the Civil War—with himself as commander. He sailed the same vessel to victory in the first transatlantic yacht race from New Jersey to the Isle of Wight in 1866, and established the Gordon Bennett Cup for international yacht racing.

His fondness for horses inspired him to cofound the first polo club in the United States, yet he took his equine enthusiasm a bit far in Newport, R.I., where he encouraged a friend to ride one of his horses into the resort’s most select club, the Reading Room. Bennett thereafter withdrew his membership and, across the street, built the Newport Casino, which soon supplanted the older institution as the colony’s toniest haunt.

This partiality to stunts was not confined, however, to his personal life. After assuming control of the Herald, Bennett—keenly aware that, like him, the public wanted to be entertained more than to be informed—staged several circulation-boosting sideshows in the paper’s pages. His most celebrated such endeavor was the promotion of journalist Henry Morton Stanley’s trek into Central Africa to find Dr. David Livingstone, the Scottish missionary and explorer who was presumed missing. He also funded the steamer Jeannette’s much-followed but less fruitful expedition to reach the North Pole. This enterprise resulted in the deaths of a dozen men and a significant increase in readership for the newspaper, which became not only one of the most profitable periodicals in New York but also the most popular.

These sensational news stories, however, were inevitably surpassed by tales of his own exploits—one of which finally brought about Bennett’s own social ruin and exile to the shores of the French Riviera, where he remained for most of his life. Engaged to one Caroline May, a maiden of delicate sensibilities, he paid her a call at her family home on New Year’s Day of 1877. This considerate gesture on the part of a man deeply in love was followed by that of a man hopelessly intoxicated: On entering the drawing room, the fancier of fires evidently strode directly to the mantelpiece and, unfastening his pants, attempted with the determination of the most fearless pompier to extinguish that blaze with the by-product of his own excess.