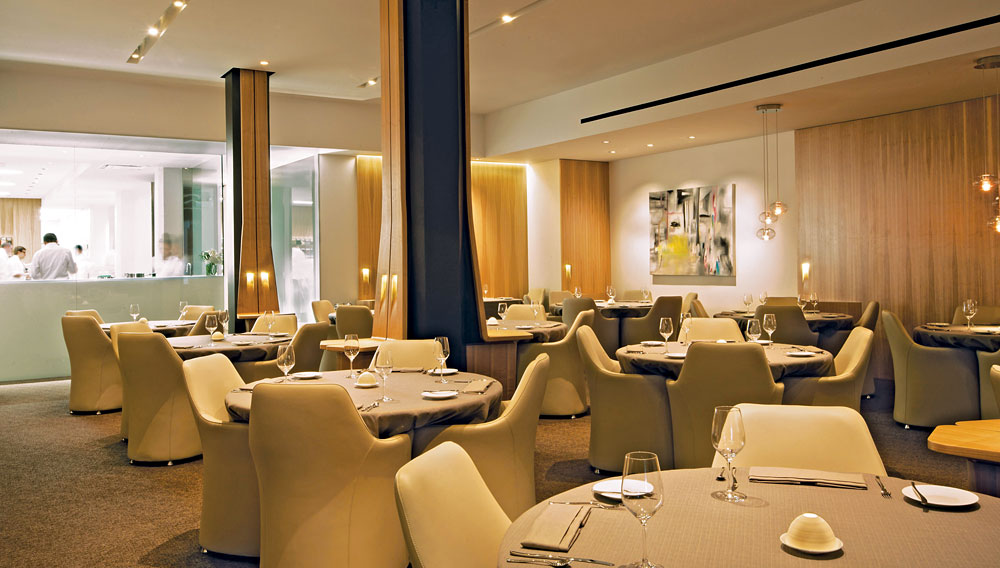 It is something of a shock to discover an ardently modern, ambitious young restaurant where the dining room is as refined as the cuisine. But the chef Curtis Duffy and his partner and sommelier, Michael Muser, have created exactly that at Grace, their 6-month-old restaurant in Chicago’s trendy West Loop neighborhood. Grace cossets diners in good linens, comfortable leather chairs, and all the other near-forgotten trappings of fine dining—and then delivers jolt after jolt of excitement with a menu filled with immense flavor and beauty.

Opening such a restaurant seemed inevitable for Duffy, who has worked his way through Chicago’s top dining establishments, starting with three years in Charlie Trotter’s kitchen. He has been the pastry chef at Trio, the chef de cuisine at Grant Achatz’s Alinea, and the executive chef at Avenues at the Peninsula Chicago, where he was awarded two Michelin stars.

At Grace, the 37-year-old Duffy aligns the elements toward maximizing pleasure. The spacious room holds just 17 tables, each booked only once for the evening (and only by telephone). The menu offers two eight- to 12-course tasting menus ($185), one focusing on vegetables (Flora) and the other on meat and seafood (Fauna). Each meal begins with four jewellike amuse-bouches (presented on a charred barrel stave) that might include a segment of satsuma tangerine encased in a glassy shell of sugar and smoked paprika, or a tiny gougère filled with smoked banana and cilantro.

There is no deprivation in choosing the Flora menu; a course of poached chestnut, for example, consists of an ultrasmooth chestnut puree served with roasted almond-milk custard, a crisp and salty black-truffle meringue, red sorrel, and slivers of raw chestnut and fresh black truffle. The flavors are echoed and refracted, down to the herbed scone served alongside. (A specific bread is baked to complement each dish.) The course’s counterpart on the Fauna menu is Matsusaka beef, the ultramarbled premium grade from Japan. Duffy quickly grills it three times over high heat, layering a series of seasonings: first gray sea salt, then sake, and finally soy sauce. The result is toothsome and deeply beefy, but not enough for Duffy, who serves it with a slice of focaccia made with liquefied Matsusaka fat.

Desserts are equally compelling, particularly one called Young Coconut. Torn pieces of cake made with intense African blue basil are strewn with strips of young coconut, beads of frozen coconut milk, and disks of coconut-water gelée, and served with an oval of African blue-basil sorbet, lime puree, and pickled huckleberries. Delicious and elusive, yet familiar, it is Duffy’s meditation on Thai flavors.

Muser’s wine cellar is designed to complement the cuisine, with 1,400 selections emphasizing Alsace, Champagne, Germany, the Loire, and reds from the Rhône Valley. Indeed, his pairings ($110) are as surprising as the menu. Muser might confidently reach for a 2011 Grosjean Frères Pinot Noir from Val d’Aosta instead of the expected Burgundy, or even a 2011 Eric Bordelet pear cider from Normandy.