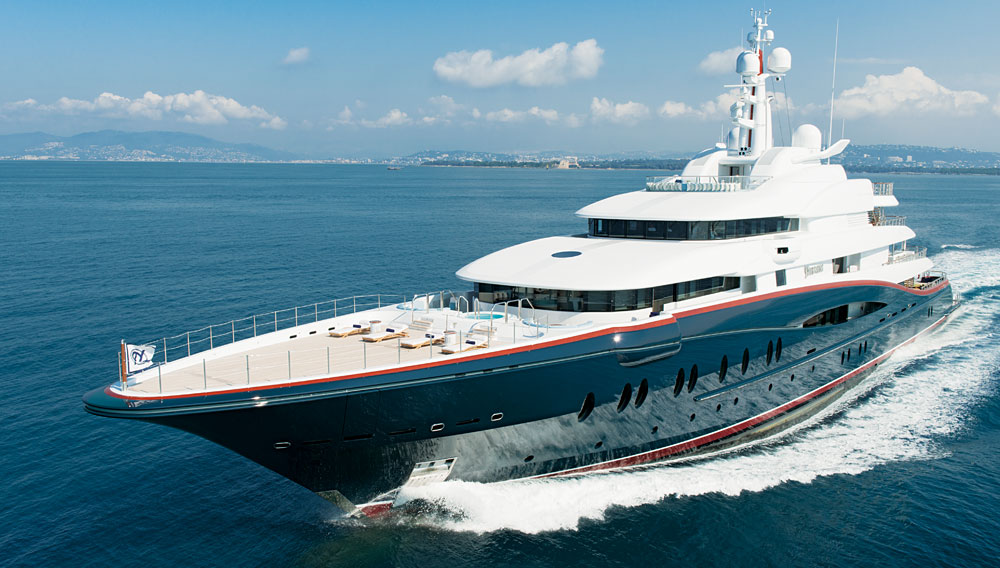 A relative newcomer in the megayacht world, Oceanco has secured its place among the industry’s elite ranks in recent years with builds including Alfa Nero and Seven Seas. The 290-foot Nirvana, which the 26-year-old Dutch company delivered last April, is arguably the most spectacular of the yard’s 24 launches to date.

Spanning six decks, Nirvana sleeps as many as 12 guests in six cabins and affords room for a crew of 26. The yacht’s architecture and interiors are the work of the Australian designer Sam Sorgiovanni, who also designed Oceanco’s 2008 launch, Anastasia. Sorgiovanni’s two-tone exterior for Nirvana visually separates the steel hull from the aluminum superstructure with a sweeping strip of mahogany-colored paint that extends the length of the boat.

The owner of Nirvana, which flies a Cayman Islands flag, tasked the designer with creating an interior that evokes a tropical rain forest. To that end, Sorgiovanni selected nearly 200 interior materials, including at least 10 wood varieties ranging from oak and teak to eucalyptus and palm. Ceilings made from woven Indonesian rattan pair with bamboo flooring carved to resemble windblown sand. In the 2,150-square-foot main saloon, two glass vivaria—containing live exotic amphibians, reptiles, and plants—separate the dining area from the lounge.

Passengers can access four of Nirvana’s six decks via a central glass-enclosed circular elevator, which is wrapped in a stainless-steel Balinese sculpture made to resemble bubbling water. The yacht’s bridge deck offers a nearly 1,000-square-foot gym and a sauna, while the lower deck is home to a dedicated cinema with seating for 10 people on two tiered rows of sofas. The cinema also includes a bar, a popcorn maker, a 3-D projector, and a Kaleidescape digital media library containing 3,600 films, which are accessible from all of the dozen-plus flat-panel Samsung televisions throughout the yacht.

The majority of Nirvana’s outdoor deck space is located aft, though one of the boat’s exterior highlights is set forward at the bow. Here a private owner’s deck includes a hot tub, a pair of circular dining nooks, several lounge chairs, and drop-down balconies port and starboard. Inside is a bedroom suite of more than 1,600 square feet with a skylight and a dedicated saloon with floor-to-ceiling windows.

On the top deck, which is almost 40 feet above the waterline, a large sunbed surrounds a 10-person spa forward, and a circular sundeck aft can be used as a touch-and-go helipad. Aft on the main deck is a 25-foot-long, oval-shaped, adjustable-depth saltwater pool with jets that simulate a current for swimming in place.

Below the main deck, at the stern, the stepped center portion of a water-level swim platform lowers into the sea, and the mahogany-colored garage door opens. Nirvana’s water toys include two 36-foot tenders (which launch via cranes from supplemental garage doors port and starboard) as well as a 28-foot ski boat, six Jet Skis, four WaveRunners, and several Seabobs and towables.

For those interested in experiencing Nirvana and all that it has to offer, the yacht’s owner occasionally makes it available for charter, with rates beginning at about $1,000,000 per week.