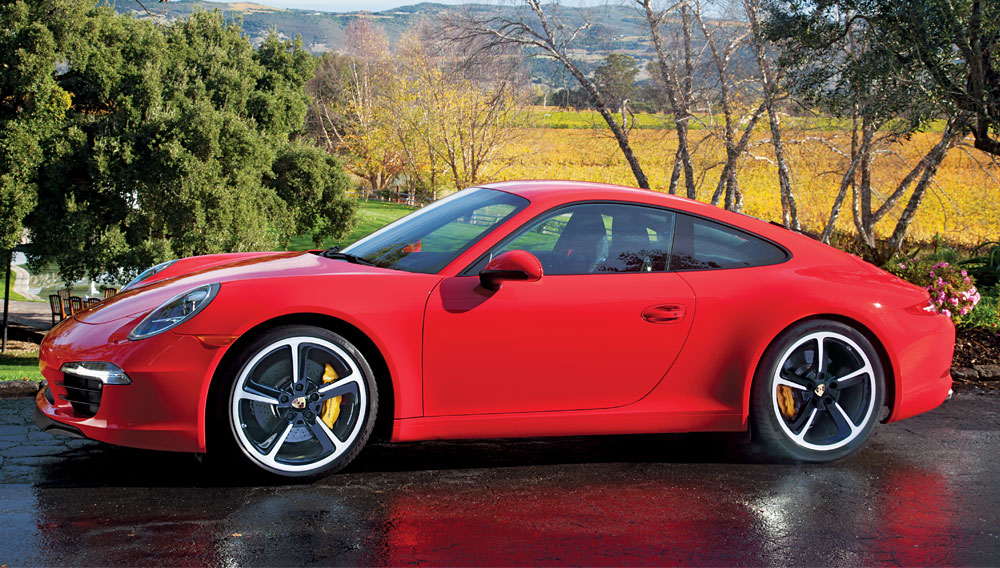 The $100,000 sports car has become as common as dirt. So how is it that one, the 911 Carrera S, charmed enough judges to be voted Car of the Year by a substantial margin? To anyone who has ever owned a 911, the answer is simple. Porsche has taken a 50-year-old design and constantly refined and improved it without altering a single word from the original mission statement, and it has kept the price relatively affordable. In the truest Miesian sense, the 911 proves that less is more.

Of course, more can be more, too. The latest Carrera S—all new for the 2013 model year and known internally at Porsche as the Type 991—is longer, wider, and lower than any previous 911. It is also more powerful, quicker, faster, better handling, and a whole lot more luxurious. Porsche purists may initially balk at a cockpit more akin to a Panamera’s than a spartan 911’s—as this 911 veteran did—but the materials and the fit and finish of the interior should convince them that a little coddling is not so bad after all.

Purists especially will appreciate the 7-speed manual gearbox. While the optional PDK transmission makes for faster shifts and easy freeway driving, the stick is so darned fun that it clinched the deal for me. The Carrera S is a car I could easily live with every day—until the next 911 comes around. —Robert Ross

Like the name of just about any Ferrari or Rolls-Royce model, the Porsche 911 moniker serves as an immediate appraisal of what the car does well. Still shaped like a ballet slipper, powered by a horizontally opposed 6-cylinder engine, and priced to offer value, the 911 provides benchmarks for agility, quickness, balance, response, and stability. Add driver involvement that reaches an almost supernatural level, and you have the formula that has kept the 911 impeccable and way ahead of the sports-car pack since it first drove into our hearts in 1963. This also is the stuff that cars of any year are made of, and so the Porsche 911 Carrera S became the overwhelming champion of this year’s contest. —Paul Dean

When the 911 debuted in 1963, it was a revelation, a sports car for the ages that enabled Porsche to rise to the pinnacle of performance-car manufacturing. Now nearing the end of its fifth decade of production, the 911 is better than ever, and it has the Car of the Year title to prove it. The true beauty of the new Carrera S lies in its details. Compared with the previous iteration, it appears to have changed ever so slightly—as though a designer took a scalpel and tweezers to the exterior. But the car is 2 inches wider, the wheelbase is 4 inches longer, and the engine has been inched forward. These adjustments improve the 911 aesthetically and ergonomically and help to produce perhaps the perfect version of a legendary car. —Paul Meyers