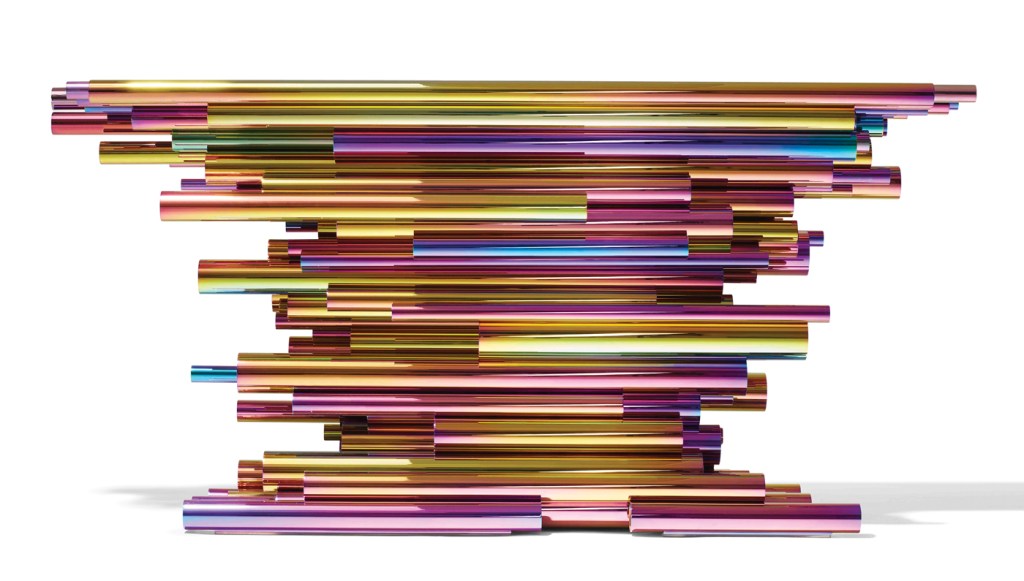 Hervé Van der Straeten’s rainbow-hued Pipe Show console may seem an unlikely fit among the marble busts and old-master oil paintings of the venerable European Fine Art Fair (tefaf.com). But according to the French designer—whose limited-edition creation recently made its colorful debut at the annual art show in Maastricht, the Netherlands—that’s the point. “For this edition of TEFAF, I wanted to show a piece that would be highly contrasting to a selection of 18th-century productions,” he says. “I wanted to show a piece that would create a dialogue.”

Indeed, Pipe Show (vanderstraeten.fr) is a conversation piece. Composed of brightly colored stainless-steel tubes the artist has carefully stacked, the console is a study in contrasts, blending the strength of its material with the fluidity of its form and the warmth of its color spectrum. “It is the transformation of a very common element into a precious piece of furniture,” says Van der Straeten.

Pipe Show’s exquisite artisanship—the designer says it takes roughly 2 months to make each piece—is no doubt a quality that the work has in common with the old masters and antiques of TEFAF. And with a limited production of just 60 examples, the console may even prove to be more collectible than a marble bust or two.