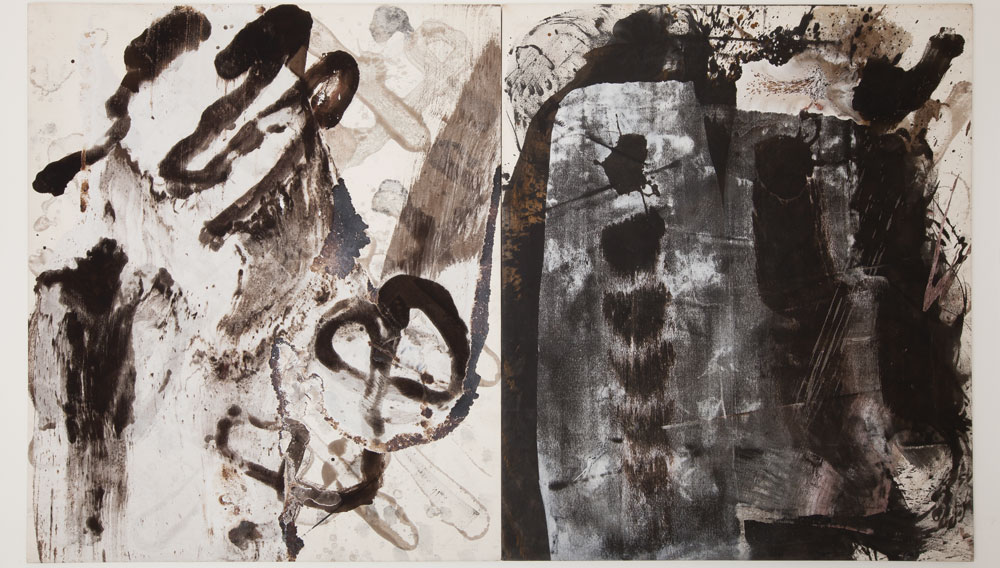 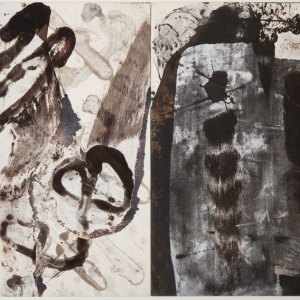 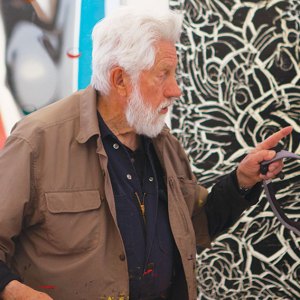 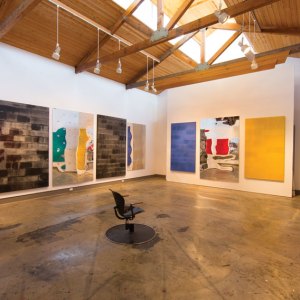 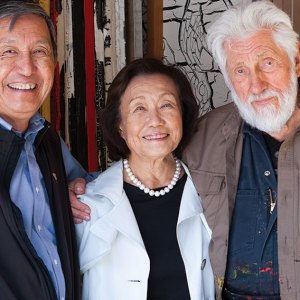 It all began about 40 years ago, with a mysterious, dense black painting. Ken and Sandy Tokita were riveted by the piece the moment they saw it at the Margo Leavin Gallery in Los Angeles. But they had no idea why the small, diagonally gridded abstraction resonated so strongly with them, or that it would change their lives.

“It’s black on black on black on black,” Ken Tokita says of the artwork, which was made by Ed Moses, a pillar of West Coast postwar abstraction who was unknown to the Tokitas at the time. “If you look at it, eventually you see the grid. If you look at it more, you see more of the grid and one red spot. It’s just dynamite. We didn’t understand it at all, but there was something magical about it. To this day, we think it’s one of the greatest pieces we have.”

That is saying a lot. In addition to that untitled work, which launched Moses’s series of cubist drawings and paintings, the Tokitas now own more than 150 paintings, drawings, prints, and limited-edition books by Moses, who turned 88 in April. It is the largest collection of his works, apart from a stash set aside by the artist himself. And it continues to grow: On a recent visit to Moses’s studio in Venice, Calif., the Tokitas added Air #3, a 6-foot-by-10-foot, two-part work featuring a dance of black lines on a bright-yellow background, and PIHW #1, a 6-foot-by-4-foot painting in which a loose framework of dark brushstrokes seems to float over an expanse of deep-blue pigment. They would have taken home a third—a spidery black-and-white craquelure painting—but Moses would not part with it.

A variety of the Tokitas’ acquisitions—roiling brews of vivid color, darkly nuanced outpourings of passion, intricately balanced grids—occupies most of the wall space at their home in Irvine, Calif. Dushay, a black, gray, and beige abstraction that appears to have emerged from a torrential force, hangs in the entryway. VGA, a juicy-red orchestration of looping lines, can be seen in a sitting room that Moses, now a close friend, has dubbed “the chapel.” (The only thing wrong with the shrinelike installation, Moses joked, is that it includes one work by another artist, pop-art master Roy Lichtenstein.) The Tokitas also display part of their collection at the Cancer Center of Irvine, which Ken, a radiation oncologist, founded and directs. “Ed Moses,” the doctor says, “lives with us.”

Visitors at both locations get a crash course in the dynamic output and inquiring sensibility of a painter who refuses to settle on a signature style. That would be far too boring for an emotionally and physically restless artist who claims that he does not make paintings, he finds them. Fiercely independent, Moses may pursue an idea for months, even years, but then he moves to something new. He is a spiritual descendant of the abstract expressionists, but also a student of Buddhism in a perpetual state of aesthetic renewal. “I never want to be in control,” Moses says. “I want to be in tune.”

Since his arrival on the Los Angeles art scene in the 1950s, as part of the stable of avant-garde artists affiliated with Ferus Gallery, Moses has made delicate drawings of roses, meticulously structured grids, and resin-permeated canvases with zigzag patterns often likened to Navajo blankets. He has also created a huge body of gestural abstractions, applying paint with sponge brushes, rag mops, squeegees, or wooden boards. In his relatively recent craquelure works, a pattern of cracks in the top layer of paint exposes the contrasting color of an undercoat as the paint dries and Moses attacks the surface.

All of this action takes place in a residential neighborhood of Venice, behind a wooden fence and gate. A tropical garden leads to the Moses art compound: a small house, an open-air workplace, and two barnlike exhibition spaces designed by modernist architect Steven Ehrlich. When the Tokitas come to call—with Japanese takeout for lunch—the conversation is filled with commentary on Moses’s latest paintings alternating with forays into philosophy, literature, and new projects. At the moment, the Tokitas and Moses are involved in two of them. On October 11, the University of California, Irvine will debut Ed Moses: Cross Section, a large retrospective of Moses’s work, including two of the Tokitas’ paintings, which is then expected to travel internationally. And in spring 2015, the Los Angeles County Museum of Art will present about 100 Moses works, also including two Tokita loans, in Ed Moses: Drawings from the 1960s and 70s.

Enduring friendships between artists and collectors are rare. This one has evolved over more than 30 years, as the Tokitas have developed their taste and tightened their focus. Initially attracted to French impressionism, they spent their early years in Seattle, where Sandy’s family was involved with traditional Japanese dance and Ken’s father was an artist. The couple shifted to contemporary art upon moving to Southern California in 1975. They made their first visit to Moses’s studio in the mid-1980s, when Ken Tokita was on the board of trustees at Los Angeles’s Museum of Contemporary Art.

With the benefit of hindsight, the Tokitas have come to understand that part of the appeal of Moses’s work is that it seems connected to their Asian heritage. The black piece at Leavin’s gallery immediately “felt good,” Sandy says, partly because the shiny, hard surface of the paint, built up in thin layers, brought to mind Japanese lacquerware. A weathered-looking example of the artist’s unstretched, resin-splashed canvases, displayed at the Cancer Center of Irvine, seems to reflect an Asian reverence for age. An earthy gray painting with squishy black lines reminds the Tokitas of calligraphy. All of which makes sense to Moses, who notes that East Coast artists are more likely to absorb European influences, while West Coast artists look to Asia.

The abstract nature of Moses’s work is also a plus, Ken Tokita says. In his view, cameras can replicate or improve upon realistic painting, but abstraction does something quite different. “It’s the closest thing to getting into someone’s head,” he says. “Nowhere in the world will there ever be anything like what was in the head of Ed Moses at the time he painted a particular piece. He can call it magic. He can call it whatever he wants, but it came out of his head.”

If the Tokitas like the artistic evidence of the goings-on in an artist’s mind, they tend to like the artist, as well. “We never buy art unless we like the artist,” Ken says. “We pretty much want to buy the work of living artists because we want to get to know them. That’s the fun part.” In the case of Moses, the Tokitas’ respect has grown with their awareness of a generous spirit that is often hidden by a noisy public persona.

(Continues on next page..)

As Ken tells the story, he once got a call from Moses, offering to sell an untitled, predominantly orange painting that he had refused to part with earlier. Assuming that he needed cash to pay his taxes, the Tokitas purchased the artwork, which they call Orange 1991. About six months later, another artist approached the collectors with thanks for their gift of a sum equal to what they had paid for the painting. “Ed had taken the money and given it to an artist who was really hurting,” Ken says. “We had no idea.” On another occasion, Moses secretly used Tokita sale money to help the mother of a young woman who had worked for him. Moses dismisses such charitable gestures as atonement for past sins, but Ken Tokita does not agree. “That’s Ed,” he says of the artist’s aid to friends in need. “Those two experiences might help to explain why we like him so much. How many people do that?”

The Tokitas are far from the only believers in Moses, who is represented in museums and private holdings around the world. In a marketplace that favors the latest creations of hot youngsters, works by artists of Moses’s stature and vintage tend to be undervalued, says dealer William Turner. But Moses is riding a wave of renewed interest in West Coast pioneers, according to Turner, who recently paired paintings by Moses and veteran New Yorker Larry Poons in a show at his Santa Monica, Calif., gallery. “It was very successful,” Turner says, adding that he sold about a dozen works by Moses, at prices that went up to six figures.

Alexis Chompaisal, department director of Bonhams’s Made in California contemporary art sales, says that Moses’s inclusion in key museum exhibits helped mitigate the art-market crash of the early 1990s. The Museum of Contemporary Art in Los Angeles gave him a retrospective in 1996; he has appeared in the J. Paul Getty Museum’s Pacific Standard Time program; and he was featured alongside Bruce Nauman, David Hockney, Ed Ruscha, Bill Viola, and James Turrell in Los Angeles 1955–1985: Birth of an Art Capital, an influential 2006 exhibit at the Centre Pompidou in Paris.

“We found that around 2007, there was a huge demand for these California artists consigned at auction,” Chompaisal says. “They got pretty strong results.” Bonhams launched its Made in California sales that spring. Chompaisal welcomes Moses consignments whenever the opportunity arises, which is not as often as she would like. “I think collectors are not ready to part with them. That’s why you don’t see them at auction,” she says. “Now I feel that every time I have a Moses work, it will be a great success because so few are up for sale.”

The Tokitas, who celebrated their 45th wedding anniversary this year, have yet to work out a long-term plan for their collection, but they consider themselves fortunate to have built it. Contending that his own contribution to the field of medicine will be forgotten and that his methods of treating cancer will seem archaic in the future, Ken Tokita is proud of helping to ensure that the art of Ed Moses will survive. “One day, people are going to come into a museum and see the Tokita collection and ask, ‘How did they know to collect that guy?’” he says. “We think he is one of the greatest painters in our era, and we get to live with him and help develop our culture. The artists who might have been great but never got collected are never going to be seen 100 years from now. Their paintings will be gone.”

Ed Moses artworks first arrived on the auction block in the late 1980s but have experienced a resurgence lately, notably in sales dedicated to West Coast artists. Here is a closer look at his top five results at auction.

Untitled, 1957, oil on canvas (shown) Offered at Bonhams Los Angeles’s Made in California: Contemporary Art auction in April 2013, the piece was sold for $50,000 against an estimate of $7,000 to $9,000. Alexis Chompaisal, who directed the Made in California sale, credits its impressive result to its early date: It was the first 1950s-era Ed Moses painting ever consigned for sale.

Untitled, 1985–1986, acrylic on canvas Offered in a California sale by Butterfields in October 1991, the piece fetched $27,500 against an estimate of $6,000 to $8,000. Not long after this sale, the art market as a whole imploded. Decades passed before Moses works performed this well again.

Untitled, 1965, paper relief and drawing on illustration board This unusual piece was sold at Los Angeles Modern Auctions in October 2013 for $22,500 against an estimate of $2,000 to $3,000. Named for the artist’s wife, the charming 5.5-by-6-inch confection is one of the few Moses artworks of its type to come up for sale.