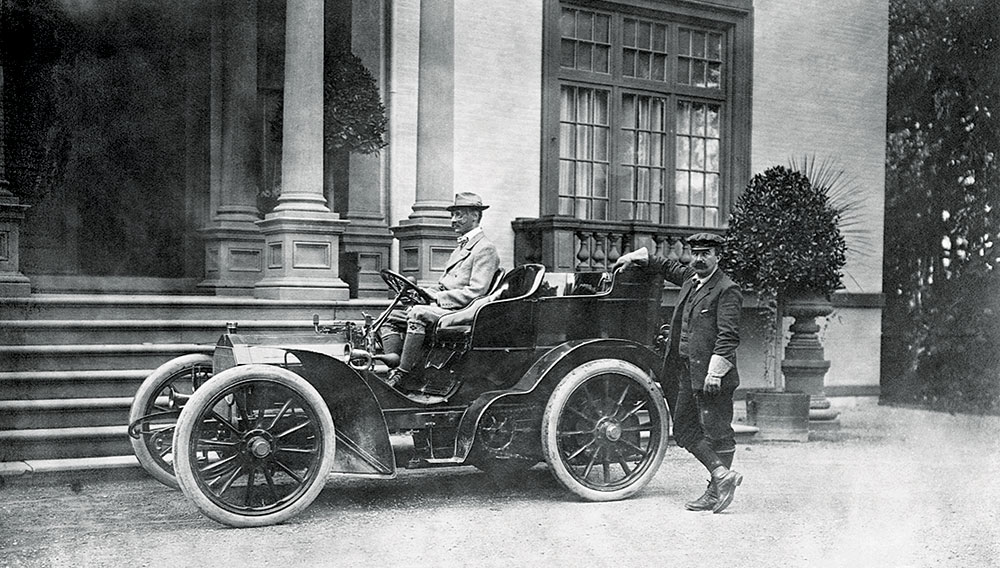 Aficionados of our annual Car of the Year competition understand that certain machines have souls—and hearts. These individuals hear in the rev of a finely tuned motor the eloquence of a sonnet, see in the curve of a fender beauty to rival that of the human form, and recognize in the gleam of a polished headlamp an alert and playful consciousness. Such perceptions have been much bolstered by the advent of digital technologies that enable us to speak to our vehicles—and them to us—but the curious passion that exists on the part of motorists for their particular motor of choice dates to the earliest days of the automobile, when only a few could afford to indulge this peculiar emotion. Among these early connoisseurs of cars were Oliver Belmont, Harry Payne Whitney, and John Jacob (Jack) Astor IV (pictured in one of his cars), all of whom derived as much pleasure from the horsepower housed in their garages as they did from that which occupied their stables. Yet in the early years of the 20th century, when these gentlemen of leisure arranged races on their estates, some critics might have argued that, if Astor’s 36 automobiles had hearts, their owner certainly did not.

The only son of William Backhouse Astor Jr. and Caroline Webster Schermerhorn Astor, he was one of the principal heirs to his great-grandfather’s real-estate fortune, which had multiplied to somewhere between $100 million and $200 million by the time he and his cousin William Waldorf Astor (see “Gotham Revival,” page 74) took possession of it in the early 1890s. Thereafter, the press began to take notice of the airless and overcrowded tenements that, by 1900, furnished the family with an income of $9 million a year. “It behooves a Gould or a Vanderbilt to have all of his wits,” wrote one columnist. “An Astor needs but to sit tight and collect his rents.”  Public outrage over these squalid conditions was compounded when a vagrant in search of shelter strayed into the basement of the Astor home; discovered by the servants, the interloper was arrested but quickly released when a benefactor posted his bail. Indignant, Jack proclaimed that “a great injustice [had] been done.”

In some respects, Jack was as mechanized as his motorcars. “Outwardly, he observed the correct forms,” noted one biographer, but inwardly, “he was distinguished by an almost complete absence of personality.” His first marriage, arranged by his mother, was anything but an affair of the heart: The Philadelphia socialite Ava Willing had little time for her husband. According to one guest, Elizabeth Lehr, while Ava presided over balls and endless rubbers of bridge, Jack wandered his home, turning on the player pianos he kept throughout the house. “He was not particularly fond of music,” Lehr wrote, “but the mechanical system of the pianos interested him.”

These devices apparently received more attention than his son Vincent, for whom Jack showed little affection. Although he allowed the boy to work with him in the garage, he punished any offense severely. When the 12-year-old Vincent was sent off to boarding school in Newport, R.I., Jack gave him a meager allowance of 50 cents a week.

Jack and Ava’s marriage lasted no longer than the matriarch who engineered it: Following the death of his mother, Jack and Ava divorced. Not long after that, Jack—whose behavior was as predictable as clockwork—behaved quite unpredictably when he announced his engagement to Madeleine Force, who was younger than Vincent, then at Harvard. The betrothal took place in September 1911, after which the couple departed for a tour of Europe. By April 1912, when they set out to return to the United States aboard the RMS Titanic, the new Mrs. Astor was pregnant.

The 20-year-old Vincent was perhaps more astonished than anyone to discover that he was the primary beneficiary of his father’s will. Vincent inherited not only his money, estimated at the time to be $87 million, but also his love of machines. Vincent, too, kept more than 30 cars in the garage of the family estate in Rhinebeck, N.Y. Yet he differed in one respect from his father: Whereas Jack had left a mere $50,000 to charity, Vincent left the bulk of his millions to his philanthropic foundation, which, among other things, built low-income housing, playgrounds, and hospitals in the former slum neighborhoods from which, more than a century before, the Astor millions had been gleaned.

Correction: The review of the Clos du Val 2009 JG’s Joie du Vin in the March issue (page 70) should have listed the price as $375 per magnum.