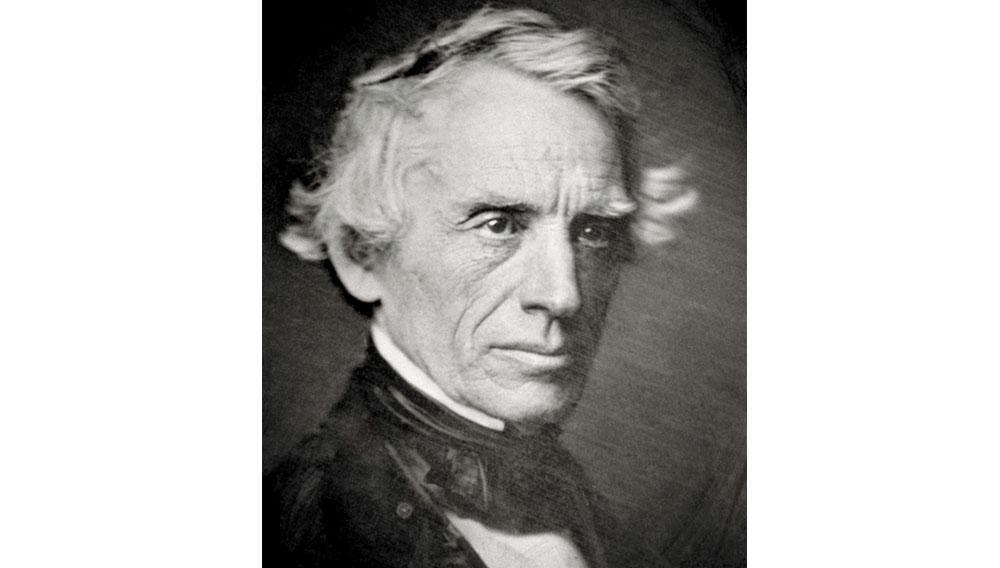 Penury and disappointment are seldom the parents of invention. Though each of the individuals in this month’s pantheon of luminaries (see “Masters of Modern Luxury,” page 71) has achieved unprecedented success, few if any of them have done so as the result of thwarted ambitions. Such, however, was the case with the gentleman who, on August 17, 1858, was celebrated at a banquet in Paris attended by numerous dignitaries, including the American minister to France, John Y. Mason. So important was the occasion that The New York Times printed verbatim the endless encomiums heaped upon the guest of honor, who was hailed as “the world’s benefactor,” through whom “civilization has made one of her surest and grandest triumphs.”

These phrases must have chimed sweetly in the ears of Samuel F. B. Morse (pictured), who had spent more than a third of his 67 years developing and defending his electromagnetic telegraph. The transatlantic cable connecting Great Britain to the United States had just been inaugurated by an exchange of messages between Queen Victoria and President James Buchanan; this knowledge surely intensified the inventor’s triumphant mood and perhaps assuaged some of the pangs inflicted by a career of false starts and brilliant failures.

Born in Charlestown, Mass., in 1791, Morse was the child of the Reverend Jedidiah and Elizabeth Morse, both stern Calvinists. His parents recoiled at the news that he wished to become a painter, but when young Morse persisted, his father reluctantly relented, arranging for him to study in London. His mother, for her part, mordantly reminded her artistically inclined son that “the main business of life is to prepare for death.”

Over the next two decades, despite genuine talent and considerable critical acclaim, Morse neither “made his salt” nor earned the money to properly support his wife, Lucretia, whom he married in 1818. To supplement his income as a professor of art at New York University, he wrote antimonarchist, anti-Catholic tracts that eventually appeared in a single volume, Foreign Conspiracy Against the Liberties of the United States, which almost certainly contributed to his defeat in 1836 as a candidate for mayor of New York City. After his last major work, The Gallery of the Louvre (painted in Paris), proved a commercial flop, he put down his brushes for good. “I did not abandon [painting],” he later wrote, “she abandoned me.”

The death of his wife and parents within a span of three years further darkened this period of professional crisis, and Morse, determined to make his mark, focused his energies on perfecting and patenting an idea that had congealed in 1832 on the voyage home from Paris: the transmission of messages through a wire using electromagnetic relays.

Though he grappled for years with this scheme, his efforts to protect his ownership of the concept consumed nearly as much time as its development. The United States granted him patent number 1,647 in 1840, but others laid claim to his inspiration, among them Charles Jackson, a Boston physician who insisted that he and Morse had jointly conceived the plan during the return trip from France. More distressing was the partnership in England between the scientists William Cooke and Charles Wheatstone, who embarked on their experiments several years after Morse but received a British patent for their telegraph in 1837. Despite the worldwide publicity Morse enjoyed in 1844, when he transmitted the words “What hath God wrought!” from Washington, D.C., to Baltimore, Md., he and his partners failed to gain the support of the U.S. and European governments in protecting their patents. Consequently, they resorted to selling licenses for the technology to independent operators.

Full recognition, if not full remuneration, finally came during the 1858 banquet, at which the foreign minister, Mason, announced that the governments of Europe were awarding Morse the modest sum of 400,000 francs. In his remarks that evening, the vindicated inventor set aside his grievances, generously yielding “the honor of so grand an enterprise as the consummation of a Universal Telegraph to [God].” And then—perhaps recalling his mother’s admonition that, after all, the point of life is to prepare for whatever comes after—he added, “Not unto us, but to God be the glory.”