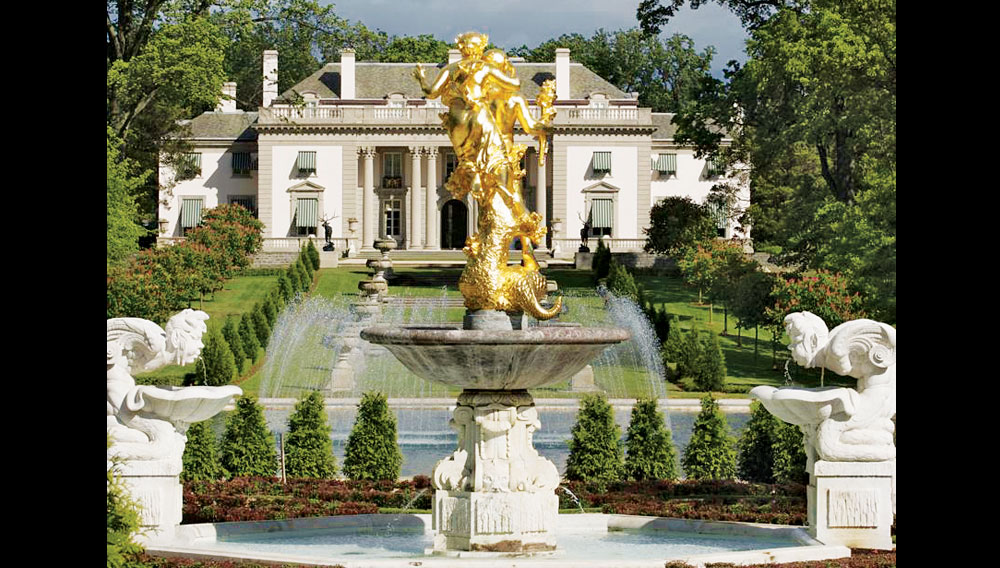 house, no matter how ultimate, is not necessarily a home. Certainly, if scale were the measure of domestic tranquility, then Nemours (pictured) would have been the happiest of abodes. The 47,000-square-foot château that Alfred Irénée du Pont constructed from 1909 to 1910 on 300 acres outside of Wilmington, Del., remains a testament to the economic might at the disposal of U.S. industrialists in the early 20th century. With five floors and more than 100 rooms, the residence resembled a smaller (though only slightly) version of the Grand Trianon at Versailles, its airy interiors sparkling with French crystal chandeliers and Louis XVI furniture. Yet despite the inviting accommodations to be found within the home, its meticulously manicured acreage was rather inhospitably enclosed by a 9-foot stone wall topped with shards of glass at the time that its monarch took up residence with his own Marie Antoinette, the former Mrs. Alicia Maddox. Indeed, much like the French palaces that inspired it, Nemours would become something of a prison for the couple that dwelled there.

For all his worldly resources, Alfred had never really had a stable home. The eldest son of Eleuthère-Irénée du Pont II (a partner in E.I. du Pont de Nemours and Company) and Charlotte Henderson du Pont, he was raised on Delaware’s Brandywine River, where his ancestor Pierre Samuel du Pont de Nemours, a French emigrant, had envisioned an agrarian utopia. Rather than embrace this peaceful pursuit, Pierre Samuel’s son built a gunpowder mill, which became the basis for the family’s vast wealth. Life at Swamp Hall, Alfred’s childhood home, was as melancholy as the house’s name: His mother, never emotionally strong, experienced a debilitating attack of postpartum depression after giving birth to her fifth child and, when not confined to an asylum, was subject to convulsive fits. In 1877, she died during one of these seizures, and several weeks later, her husband succumbed to tuberculosis, leaving the 13-year-old Alfred and his four siblings at the mercy of their relatives, who determined that they should vacate Swamp Hall. The defiant children, however—armed with a rolling pin, an axe, and a shotgun—managed to dissuade their elders from this course of action and were allowed, with some familial supervision, to remain in the house.

Swamp Hall again became the scene of discord a decade later, when Alfred, now employed by the firm, brought his bride, Bessie Gardner, there to live. Not long afterward, he began to lose his hearing—the delayed result of a childhood accident—and Bessie soon treated him as though his disability were mental rather than physical and demeaned him before friends and employees. Although Alfred, in partnership with his first cousins Coleman and Pierre du Pont, had managed to gain control of the family business, Bessie showed him little respect. Their marriage, which produced three daughters and a son, deteriorated into a pantomime of protracted silences and locked bedroom doors.

For solace, Alfred turned to a distant cousin, Alicia Bradford Maddox, whose husband, Amory, he had given a job. When Alfred was wounded in the eye during a hunting trip in 1904, Alicia, in Bessie’s absence, comforted him while he recovered. An intimacy developed between the older man and the younger woman, and in 1906, he divorced Bessie, settling on her a $600,000 trust and Swamp Hall, which he permitted her to retain as long as she did not remarry. His relatives criticized this paltry sum, which represented a small fraction of Alfred’s net worth; but after Alicia ended her marriage to Maddox and announced her engagement to Alfred, their criticism flared into outrage.

Recriminations on both sides intensified the scandal. While Alfred, who cut all ties with the children of his first marriage, lavished millions on the mansion he was building for his new bride, he avenged himself on Bessie by evicting her from Swamp Hall and not only razing the venerable structure but filling in the basement, so that no trace remained. Life at Nemours, however, would be no happier than at Alfred’s now-destroyed ancestral seat. Though Alfred and Alicia made several attempts to start a family of their own, these infants did not survive more than a few days. Ostracized by their relatives and society at large, the couple drifted apart as they drifted through the lonely magnificence of Nemours. When Alicia died suddenly of an apparent heart attack while traveling to Florida, Alfred, despite their estrangement, felt the loss. “This beautiful home built for her by me,” he wrote to a friend, “is of no use to anyone.”