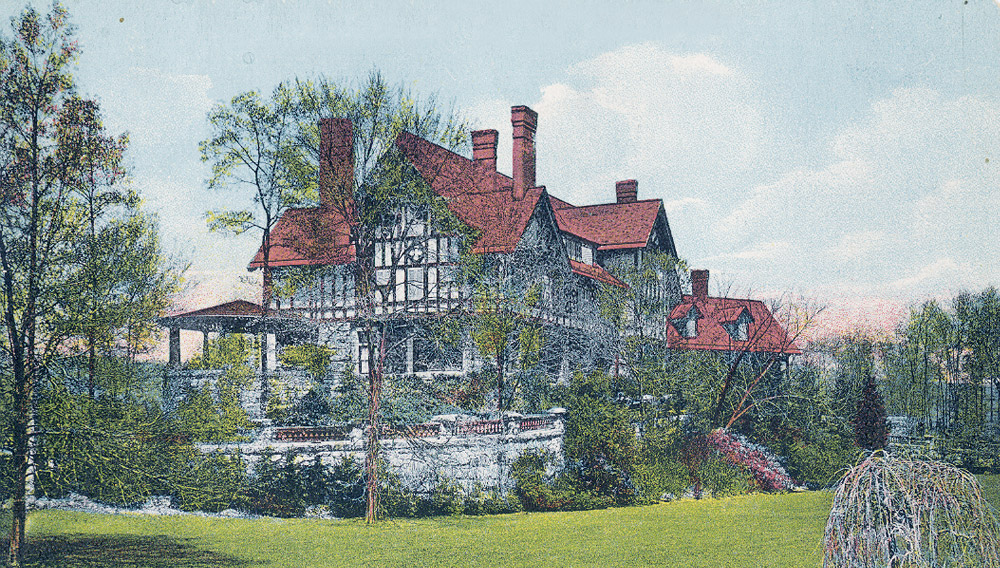 Early immigrants to North America were reluctant to emulate the European concept of the country retreat. These 17th-century strangers in a strange land understandably preferred the close company of their compatriots and the relative security of their towns to the menacing wilderness. But a century later, as the wild landscape grew tame, and the towns swelled into cities, the countryside acquired a fresh appeal. “In a mere handful of generations, people went from fearing solitude to seeking it,” noted the author Brendan Gill, who also observed that, for these colonists, especially those of Puritan and Quaker descent, such indulgence required a pretext. “Frivolous social occasions were frowned on,” he wrote, “but if a social occasion was seen to be based on a man’s need to restore his health, that was plainly a different matter.”

This “cult of the forest” flourished in the 19th century, when America’s plutocrats reimagined coastal enclaves, river valleys, and mountaintops as havens of healthy excess. Few of these elite escapes were as ambitious as Tuxedo Park, a private domain of some 600,000 acres presided over by the Lorillard family, who could count themselves among the wealthiest members of New York City’s famous Four Hundred thanks to Pierre Abraham Lorillard, a French Protestant immigrant who invented snuff and whose company, founded in 1760, launched the American tobacco industry. Located in the Ramapo Mountains, this idyllic expanse originated as a series of iron mines, which Pierre Lorillard II purchased in 1790 with purely commercial aims, adding additional tracts in the decades that followed; however, in the 1880s, his grandson, Pierre IV used his money and imagination to transform this rustic retreat into one of the first—and certainly the most elaborate—planned communities. Under his supervision, immense residential “cottages” (example shown) were erected, while the splendid clubhouse was surrounded by stables, a swimming pool, and even a ready-made village, which contained several blocks of shops to cater to the needs of members culled from the most exclusive social circles. To these amenities were later added a golf course, a toboggan run lit with electric lights, and a racetrack—a whim on the part of Pierre IV, an enthusiastic breeder whose horse, Iroquois, was the first owned by an American to win the Epsom Derby. Even the woods, sweeping vistas, and shady hollows were carefully landscaped to improve upon nature’s efforts, and liveried gamekeepers patrolled the boundaries of this private paradise, ready to evict intruders. Healthful pastimes of every kind were encouraged—though not, apparently, the activity from which Pierre IV derived an income so enormous that in 1868 alone his firm paid $3.5 million in taxes. As one longtime resident later recalled, cigarettes were regarded at Tuxedo Park as “degeneracies dangerous to health and morals.”

Yet despite such dicta and Pierre IV’s impeccable planning, Tuxedo Park’s wholesome lifestyle failed to preserve the morals and health of all of its members—particularly those belonging to the Lorillard family. In June 1901, Pierre IV developed what doctors described as a “uraemic chill” while attending Ascot in England, and by the time he reached New York, the supposedly robust 67-year-old was diagnosed with “traumatic nephritis.” When Pierre IV died at 2 o’clock in the afternoon on July 7, his son Pierre V and daughter-in-law Caroline (née Hamilton) were present, as were his daughters, but his own spouse, Emily Taylor Lorillard, was conspicuously absent. The two had seen little of one another for some time, and the cause of this breach became apparent upon the reading of Pierre IV’s will: After dividing the bulk of his estate among his offspring, the deceased bequeathed to his wife a mere $50,000 annuity, leaving the largest remaining asset, his renowned stables, to one Lillian Barnes Allien, whose husband he had employed as a farmhand.

If fresh air and rigorous sport furnished Pierre V, who succeeded his father in managing Tuxedo Park, with a welcome escape from this scandal, his wife, it seems, resorted to a more drastic form of relief from her troubles. According to a later account from the family physician, Dr. M.F. Cuthbert, she was “much concerned over the condition of her heart,” though affairs of the heart may also have contributed to her anxiety. One afternoon in March 1909, she refused to take tea with her husband and, after attending a dinner party that evening, retired to her separate suite; in the morning, the family’s butler, alarmed by the smell of gas, discovered Mrs. Lorillard sprawled lifeless on her bathroom floor, her diamond tiara from the night before still in place.