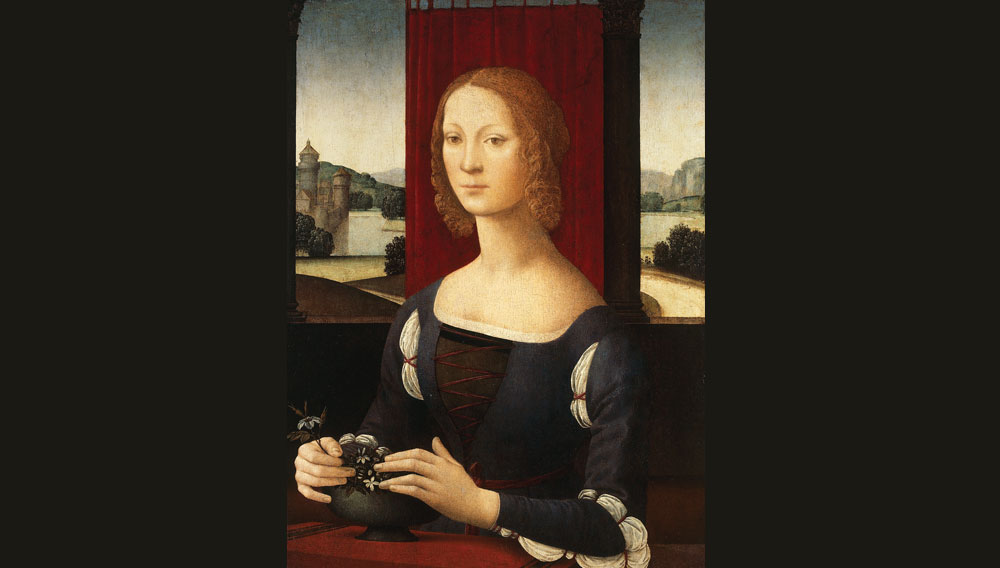 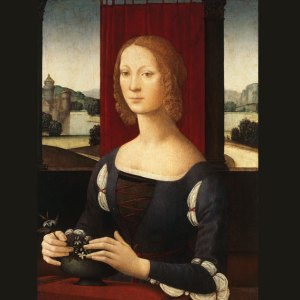 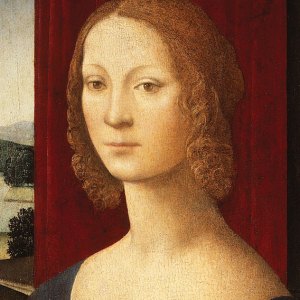 Not all gifts are appreciated. Such was the case with the surprise that Galeazzo Maria Sforza, the putative Duke of Milan, arranged for his 10-year-old daughter, Caterina (shown here as a young woman), during the Christmas holiday of 1472, when he assembled at his palace an impressive company of nobles that included Ludovico Gonzaga, the Marquess of Mantua; Giovanni Bentivoglio, the lord of Bologna; and the recently ennobled Count Girolamo Riario, nephew of Pope Sixtus IV. As logs blazed in the hearth and the halls resounded with merriment, Sforza busily negotiated an alliance that would, he hoped, secure the future of his descendants.

The son of Bianca Maria Visconti—herself the daughter outside of marriage of Filippo Maria Visconti, the Duke of Milan—and Francesco Sforza, a soldier of fortune who managed to have himself declared ruler after his father-in-law died without a male heir, Galeazzo Maria succeeded to the duchy without the recognition of the Holy Roman Emperor, Frederick III, who traditionally held authority to confer the ducal title. Unable to curry imperial favor, he decided that a marriage between Count Riario and a member of the Sforza family would persuade the new pope, a man of humble origins, to grant him the investiture he sought. Originally, Galeazzo Maria intended to betroth his cousin, the granddaughter of the Marquess of Mantua, to Riario, but when negotiations on that front faltered, he offered his own daughter instead. Not long after the new year began, a deal was struck.

By 1477, the couple was ensconced in Rome. The previous Christmas had brought young Caterina a surprise of a different kind. On December 26, the Feast of Saint Stephen, three members of Galeazzo Maria’s court stabbed him to death as he entered the church to hear Mass. Chaos erupted, and Caterina’s stepmother, Bona of Savoy, assumed the role of regent for her 7-year-old son and quelled the unrest. Though Bona’s regency was short-lived—Galeazzo Maria’s brother, Ludovico, eventually wrested power from her—the young countess could hardly have failed to be impressed by the older woman’s handling of the crisis. Seven years later, on the death of Sixtus IV, when Roman mobs turned against Riario (who had used his privileged position to attack his numerous enemies), the pregnant Caterina, doubtless recalling her stepmother’s decisive action, seized the fortress of Castel Sant’Angelo and leveraged her position to preserve the count’s claim on the Romagnol towns of Imola and Forlì, which the late pontiff had bestowed on him.

The countess had cause to employ this successful tactic more than once in her career. When conspirators invaded the palace at Forlì, slaying her husband, Caterina, again pregnant, managed to trick her captors into allowing her into the city’s fortress of Ravaldino to persuade its castellan to surrender. Once inside, she took command, and when the rebels threatened to kill her children, she supposedly replied from the battlements, “Do it then. I have the means to make more!” Her resolve in this instance won her the admiration of some and the enmity of others. Unfortunately, Pope Alexander VI and his son Cesare Borgia counted themselves in the latter group.

Her conflict with the Borgias came to a head—like so many other significant events in her life—at Christmastime. She had successfully ruled Imola and Forlì after the death of her husband and, by 1499, had married twice more, the last time to Giovanni de’ Medici, a wealthy member of the cadet branch of the celebrated Florentine family. He died of illness in 1498, leaving her with a son. Alone again, she faced yet another invasion of her territories as King Louis XII of France seized Milan from her uncle Ludovico and Cesare Borgia claimed the cities of the Romagna as his prize for supporting the French. Though most of her neighbors capitulated, Caterina, determined like her father to preserve her fledgling dynasty, withdrew again to Ravaldino. The holiday was rung in not by the peal of bells but by the roar of cannons, as the Borgia army bombarded the walls of the fortress. After six days the stones crumbled, and the countess at last lost the possessions she had so stubbornly fought to hold.

Caterina would not regain her cities, and with Milan under French control, her father’s ducal dreams for his progeny seemed dashed. Yet the tumultuous life to which Galeazzo Maria had consigned his daughter so many Christmases before bore one final gift: In 1569, her grandson by Giovanni de’ Medici would be crowned Cosimo I, the first Grand Duke of Tuscany.