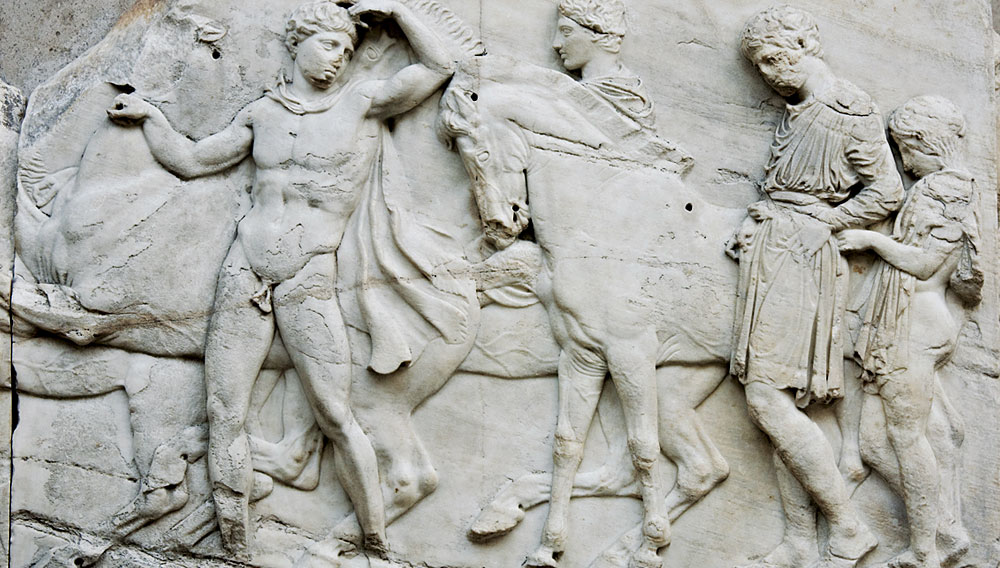 When the HMS Phaeton sailed into the port of Constantinople in 1799, dignitaries in festive costumes lined the quays of the ancient port to greet the most illustrious passenger aboard the frigate: Thomas Bruce, seventh Earl of Elgin and 11th of Kincardine, who only months before had been appointed by King George III as the British ambassador to Turkey. Elgin’s mission was to form an alliance with Selim III’s government and reconquer Egypt, which Napoleon Bonaparte had recently wrested from the Ottoman Empire. But his true ambition in the eastern Mediterranean was of a personal nature: He came to obtain from the sultan priceless treasures. These prizes, however, were not among the precious gems that filled Selim’s treasury; rather, they were to be found in an outpost of the empire: Athens.

An aesthete, Elgin was drawn to the diplomatic post by the prospect of leading an expedition to Greece, supposedly for the purpose of making sketches and plaster casts of its monuments and statuary. Yet before he could avail himself of this opportunity, the 33-year-old nobleman had to marry—a condition the monarch placed on his being granted the post. Elgin chose as his bride Mary Nisbet, the daughter of a wealthy landowner, whose estates outside of Edinburgh generated a colossal income—a fact with which the groom, whose fortune was modest at best, was certainly well acquainted. Money was a constant preoccupation for the new ambassador, especially since the foreign secretary had informed him that he must pursue his artistic endeavors at his own expense.

By the time the Phaeton reached its destination, Elgin had discovered that Turkish officials could be easily cajoled or bribed into surrendering antiquities: On the island of Tenedos, the local pasha allowed Elgin’s men to remove two inscribed marble seats from a church, much to the dismay of the locals. This knowledge was assiduously applied in Athens, where the ambassador and his men—having received permission from the sultan’s government to “excavate where necessary” among the ruins of the Acropolis and “to take away any pieces of old stone with inscriptions, or sculptures”—reinforced a very liberal interpretation of their concession by showering the Turkish authorities with such valuables as telescopes, textiles, and firearms. As a result, the ambassador’s cultural attachés managed to remove approximately half of the marble sculptures and friezes from the Parthenon, as well as other rare relics from elsewhere in the Greek Peninsula. One of these operatives, Captain Thomas Lacy, captured the mood of this mission in a letter: “I depart to Athens: to plunder temples and commit sacrilege. A proper finish to my diplomatic career!”

The removal and shipment of the marbles, however, proved the finish of more than a career for Elgin. Public sentiment in Britain had turned against his depredations, and the intelligentsia raged against this offense. No voice was more mordant or eloquent than that of George Gordon Byron, who depicts in the poem “The Curse of Minerva” the denizens of Olympus exacting their revenge on the desecrater: “Yet still the gods are just, and crimes are cross’d: / See here what Elgin won, and what he lost!”

In Byron’s verse, Athena curses Elgin and his heirs, while Aphrodite punishes Lady Elgin; and here, by several strange twists of fate, the visionary poet appears to have turned prophet. After closing his embassy and embarking for Scotland with his growing family (Lady Elgin had given birth to four children during their long sojourn), Elgin was detained in France as a prisoner of war by Talleyrand, Napoleon’s foreign minister. During this incarceration, the Elgins’ youngest son died of fever, and while in Paris awaiting her husband’s release, Lady Elgin engaged in a love affair with a young Scotsman, Robert Fergusson—a liaison that continued once she reached Britain, provoking Elgin to successfully sue for divorce. To procure his masterworks, the earl had spent nearly 75,000 pounds, much of it borrowed from creditors, but he was unable to convince Parliament to pay that unfathomable sum to acquire the marbles for the British Museum. In desperation, he settled for half that amount. The transaction left him broke, with nothing to leave his only remaining son and heir, who was later diagnosed with epilepsy. Yet the gods were not content simply to let Elgin die a broken man: While in the Mediterranean, he had contracted syphilis, which gradually dissolved the tissues of his nose, leaving only a raw sore in its place. “Noseless himself, he brings here noseless blocks,” wrote Byron, “To show what time has done and what the pox.”