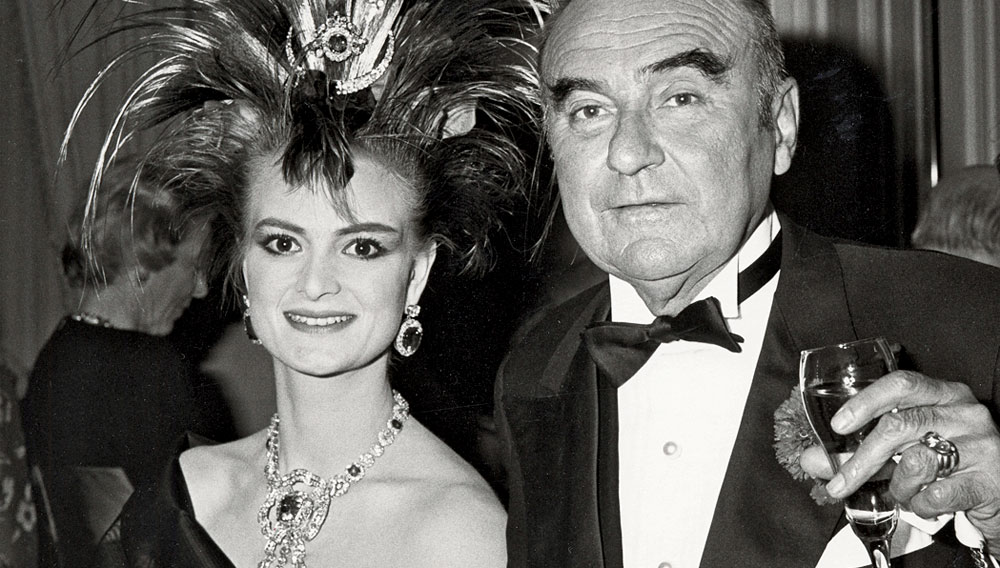 Sartorial styles, for better or worse, connect cultures—bridge east and west, link north and south—through the common bond of taste (see “Orient Expressions”). Throughout Europe’s history, shared standards of dress and deportment contributed in their small way to the commingling of royal bloodlines that resulted in the continent’s elaborate network of pedigrees. Today, however, the noble ranks serve the couture industry as often as it serves them: Most of the European haut monde pays court at fashion galas to the designers, who preside like sovereigns over their guests. As The New York Times observed in its account of a 1986 bash thrown for Karl Lagerfeld at the Palace of Versailles, “kings and queens of fashion such as Kenzo Takada, Dior’s Marc Bohan and the Italian designers Anna, Federica and Maria Teresa Fendi” were present, surrounded by an entourage of “working and unemployed counts and countesses” as well as “a clutch of princesses” that comprised, among others, Ghislaine de Polignac, Laure de Beauvau-Craon, and Gloria von Thurn und Taxis. Yet the latter of these ladies—who, only six years before, at the age of 20, had married her Fürst, Prince Johannes von Thurn und Taxis—did not remain a silent member of the clutch for long. “On this same floor, the great-great-great grandfather of my husband was dancing like crazy,” she remarked to the Times correspondent. “But the fact that there were no bathrooms still bothers me.”

Dubbed the punk princess—thanks to her spiked hair and affinity for Harley-Davidsons—Gloria (pictured with Johannes) was well versed on the subject of castles: Her husband’s overstuffed real-estate portfolio included numerous regal properties, the grandest being the 500-room Schloss St. Emmeram in Regensburg, Germany, which was originally constructed as an abbey in the eighth century. Johannes’s family traced its own history to the mountains of northern Italy, where an ancestor by the name of de Tassis established a private postal service in the 15th century that later became the courier of record for the Holy Roman Empire. Though this enterprise was absorbed by the Prussian government in 1867, the family received ahefty sum in exchange, and in 1982, when Johannes assumed his place as head of the dynasty, he controlled a fortune valued at several billion dollars, making it one of the largest in Germany.

Armed with these resources, the prince and his bride, who was 34 years his junior, embarked on a decade of revelry that shocked some of the more conventional members of their social circle and delighted the international press. The prince, who was openly bisexual, frequented discotheques that were infamous points of assignation, and he habitually engaged in spiteful pranks. He was reputed, for example, to have introduced a piranha into an acquaintance’s aquarium of rare fish, and supposedly he once sprayed a guest’s sable coat with hair remover. For her part, Gloria, who regularly rocked the house at Studio 54, was on one occasion arrested for possession of hashish at the Munich airport, and while a guest on David Letterman’s late-night talk show, she famously barked like a dog. These antics made her steady fodder for gossip columns, where she was often referred to as “Princess TNT” and “the dynamite socialite.” Her most explosive stunt, however, occurred during her husband’s 60th birthday celebration, which was held at St. Emmeram. Attended by such luminaries as Malcolm Forbes Jr. and Mick Jagger, this opulently orchestrated affair culminated with the presentation of cake adorned with 60 phallus-shaped candles and a performance from the hostess, who, costumed as Marie Antoinette, descended on a golden cloud to sing “Happy Birthday.”

All fashions change, however, and the reign of the punk princess ended abruptly with the heady hedonism of the 1980s.After two heart-transplant surgeries, the prince died in December 1990, leaving his wife and three young children an estate saddled with staggering financial liabilities, including a monumental tax bill. The notoriety in which Princess Gloria had exulted only a few years before quickly became a burden, as headlines proclaimed “Treasures of a Punk Princess on the Block” and “Princess Tightens Her High-Fashion Belt.”To meet her obligations, she was forced to open St. Emmeram to the public and hire out its gilded spaces for corporate events. More distressing still, at several much-publicized sales, Princess Debt und Taxes, as she came to be called, auctioned off not only priceless silver, jewelry, and paintings but also—in a fatal blow to her erstwhile punk image—the royal Harley-Davidsons.