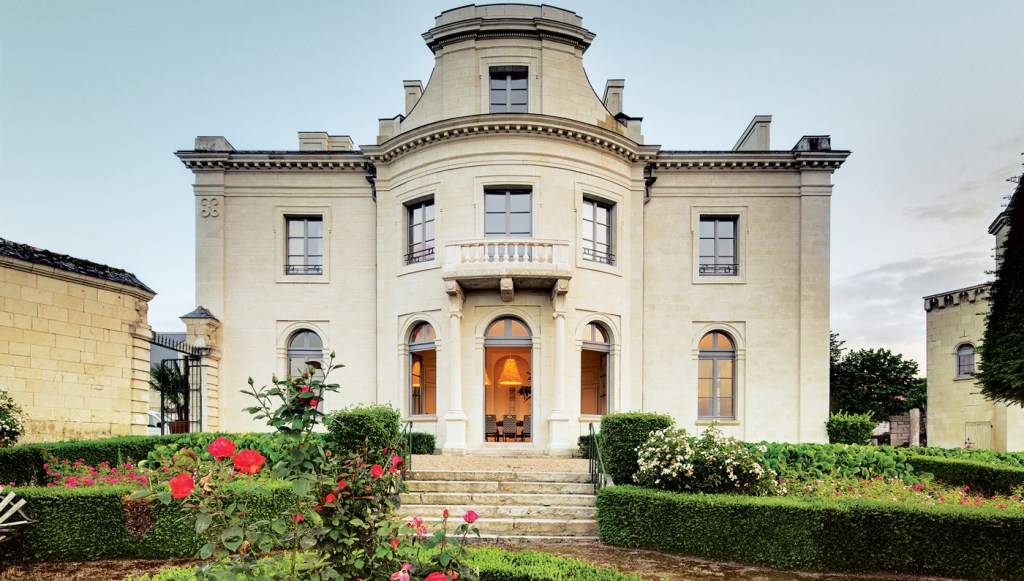 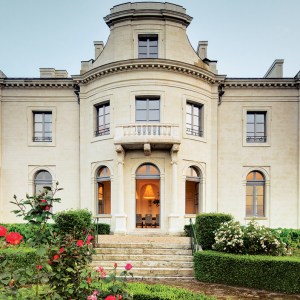 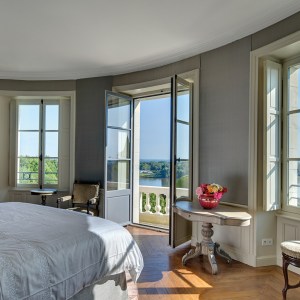 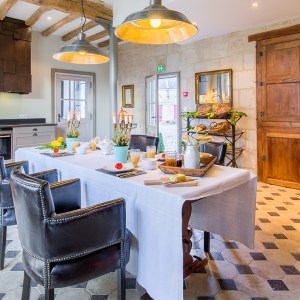 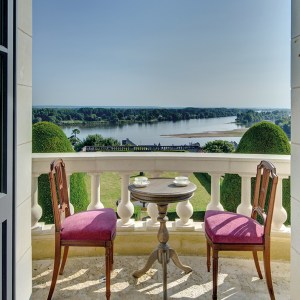 It is lunchtime on a bitterly cold January day when I arrive at Château de Môh. Within moments of pulling up to the estate—a restored 15th-century castle overlooking the confluence of the Vienne and Loire Rivers in the village of Candes-Saint-Martin—I am sitting at a long farmhouse table next to a roaring fire. A French still life lies before me: local cheeses, a crusty loaf of bread, a salad from the château’s vegetable garden, and a bottle of Cabernet Franc from a nearby vineyard. It is as though this castle, with its old wooden beams and weathered stone walls, is a country idyll created just for me—and that is precisely the point.

The former summer residence of the bishops of Tours, Château de Môh was uninhabited when the French hoteliers Monique and Didier Pignet stumbled upon it nearly a decade ago while visiting friends in the Loire Valley. The couple was headed toward retirement, a plan that the château soon put on hold. “What are we going to do with a castle?” Monique recalls asking her husband, though she concedes that she fell hard for the “soul” of the place. The Pignets also felt an immediate connection with its caretaker, Francis Katchatouroff, a talented ceramist and the son of the former owner. And so in 2009 they purchased the château and embarked on a 7-year restoration that involved more than 100 local artisans.

Completed this year, Château de Môh is the newest property in the Pignets’ collection of private rentals throughout the French-speaking world, which includes 15 villas on the Caribbean island of St. Barts and six chalets in the snowy woods of Quebec’s Charlevoix region. Unique among the group, the château consists of the seven-suite castle, a tower for private dining experiences, a pool house and spa, a venue for weddings and other events, and 11 apartments, houses, and suites adjacent to the castle. The estate—which is available either as a buyout or as outbuilding rentals for two to six people—is still overseen by Katchatouroff, whose attachment runs deep. “I love this château because it exists on a human scale,” he says.

The property’s intimate scale owes in part to Monique, who led the interior design herself, filling the castle with contemporary amenities and art installations that live harmoniously alongside centuries-old elements. Her design also embraces the outdoors, with large windows that look out to the storybook landscape. “The castle is like a big tree holding onto the village and river below,” she says.

A hub of activity from May through September, this part of the Loire Valley is home to several of the grand French castles, including Château de Chinon, Château de Saumur, and Château de Montsoreau, which reopened this April as a contemporary-art museum. Guests can also visit Michelin-starred restaurants and antiques fairs in local villages and sample vintages at estates such as Domaine de la Paleine, which hosts sublime wine-tasting floats down the Loire River. Whatever the activity, the Pignets hope to offer an experience that is both luxurious and simple, capturing the essence of the Loire Valley—and the hearts of their guests.

Trailers of the Week: ‘BTS Universe Story,’ ‘The Mandalorian,’ ‘Emily in Paris’ and More