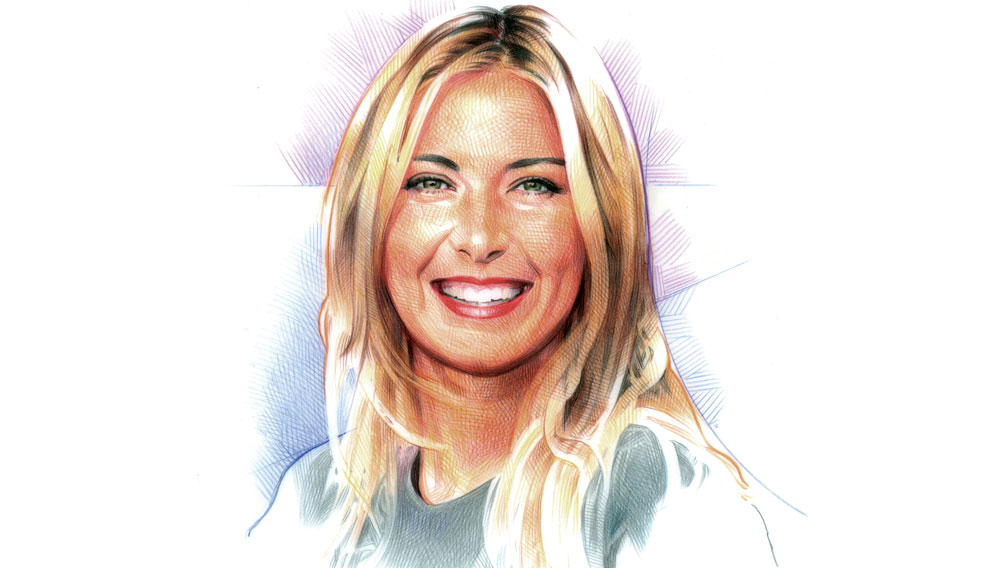 By the time she was 19, Maria Sharapova had won her first of four Grand Slam singles titles and was ranked number one by the Women’s Tennis Association. Currently ranked number three, the Russian-born star, now 26, is a global traveler, a self-described “Amanjunkie,” and the founder of an organization that aids youth in the Chernobyl-affected areas of Belarus. While her 6-foot-2-inch frame has helped make her a powerful on-court presence, it has also launched her career in the fashion world—as the face of Cole Haan and Tag Heuer, and as a Sports Illustrated swimsuit model.

How would you describe your personal style?

When you have to live out of a suitcase for so many months of the year, your wardrobe has to be versatile. But I always want to look elegant. In everyday life, I keep my style simple. For me, if a dress looks simple but there is something unique and detailed about it, that is more beautiful than something that’s completely extravagant or very bright. For day-to-day, I like Helmut Lang and Yves Saint Laurent. For the red carpet, I prefer Sarah Burton for Alexander McQueen and Stella McCartney. Stella McCartney knows a woman’s body so well. There are so many people in different shapes and sizes that can wear her clothes. I think she’s brilliant.

Aside from championship titles, do you collect anything?

When I was young, I collected stamps. When I traveled for work, the one thing I had to do before I left would be to go to the post office. No matter where I was—even if I didn’t know the language—I had to find a way to get stamps. Now I like accessories: shoes, bags, watches. I have a lot of men’s watches in my collection, more than women’s watches. I’ve worked with Tag Heuer for many years, so I have quite a big collection from them. They made a really special one for me last year when I won the French Open. They engraved all four of my Grand Slams on the watch, so the dial just has a 1-2-3-4. It’s really beautiful.

We hear you were recently vacationing at Amanyara in Turks and Caicos. Where else do you like to travel?

Because of my job, I’ve been able to travel to some amazing places. I played in an exhibition one time in Hua Hin in the middle of rice paddies, which was absolutely stunning. That was a time when they were just building up resorts in that part of Thailand, and it was so remote and so architecturally unique. Buffalo were literally running through the rice paddies. As far as resorts, I love the Aman in Phuket. The best part about Amanresorts is that they are not over-the-top luxury. It’s brilliantly done, impeccable service, and you feel like you’re the only one there.

Do you have any favorite cities?

Tokyo is one of my favorite places. It’s a busy city, and usually I can take only a little bit of a busy city at a time. But if there is one city in Asia that I could live in, it’s Tokyo. I love the people, their culture, their food. I’m a big foodie, so I also love New York. Food-wise, it’s impeccable. Even if you have the same restaurants in Los Angeles, it’s just not the same quality as in New York.

The Maria Sharapova Foundation is another one of your passions.

Yes, the foundation is 7 years old. In the beginning, it was all about awareness. Most people don’t realize that many people are still being affected by what happened in 1987. It was this incredible disaster that still affects so many lives up until this moment. We are working on sports facilities and improving the conditions of hospitals in those areas. I also have an art academic program with students in Belarus that grants scholarships for their art education.

What is your idea of the perfect gift?

I love art and jewelry, but I am not the easiest person to shop for. I like gifts with meaning, something with a story behind it. That is always a bit more relevant, and it is also safe—especially when it comes from a guy.