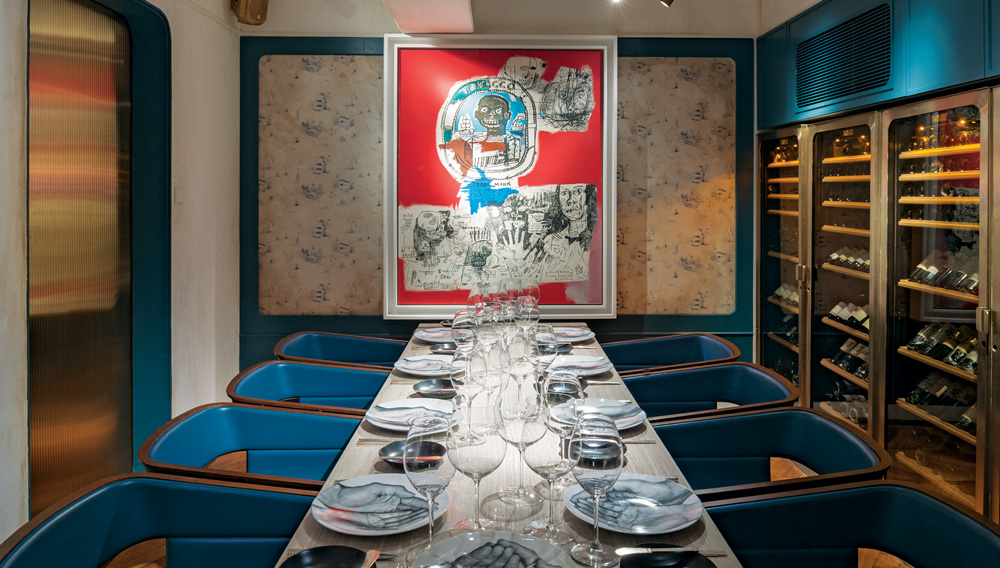 In Hong Kong, the combination of fine art and fine dining sparks the imagination.

At the third annual Art Basel Hong Kong in March, one of the hottest openings was Hong Kong­ese, an exhibition presented by London’s Institute of Contemporary Arts. The show greeted visitors with a large neon sign—an homage to the fast-fading fluorescent fa­çades of Hong Kong’s neighborhoods—and featured the works of such rising contemporary artists as Lee Kit and Dexter Dalwood. Still, much of the fanfare surrounding Hong Kongese concerned its setting: Instead of a traditional gallery or a frenzied fair booth, the show was held at Duddell’s, a Michelin two-star restaurant in the Central district.

This occasion was not the first time Dud­dell’s became center stage for Hong Kong’s art scene. Since the two-story space opened in 2013, Alan Lo—one of its cofounders—has worked with the city’s top curators and consultants to organize up to four exhibitions per year. “It’s not just about hanging pretty pictures on the wall,” he says. “This is a place that takes art as seriously as it does food.” Indeed, exhibitions at Duddell’s have been curated by such big names as Ai Weiwei and the Dutch art critic Inti Guerrero. And the cuisine—a faithful rendition of traditional Cantonese—is likewise significant, earning its second Michelin star in October.

Also last year, the Hong Kong–based curator Jennifer Chung opened the Popsy Room, located in the historic Sheung Wan district. This “multi-sensorial space,” as Chung calls it, operates as a traditional gallery by day and a French restaurant by night, serving multicourse tasting menus whose dishes complement specific works of art. The current exhibition, Ribbons & Skulls, runs through July 25 and pairs the U.S. artist Tracy Lee Griffith’s paintings with such dishes as a scallop tartare topped with colorful streaks of mango and strawberry sauce. The dish and the art “are equally important,” Chung says. “The food is the communication tool for the art.”