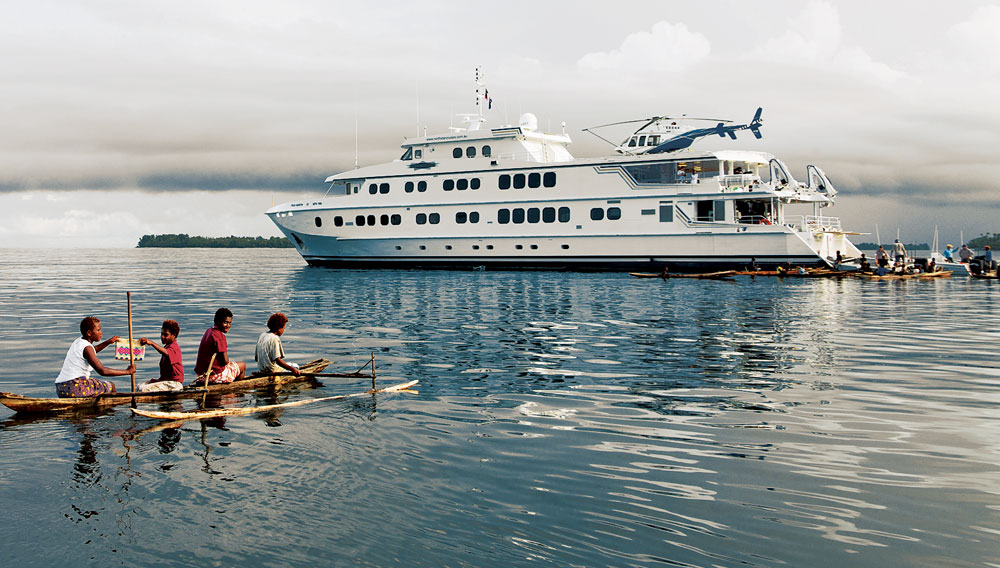 All eyes are on the eight young men seated around the fire. The skin on their backs and shoulders is deeply scarred, having been stippled with razor blades in a pattern modeled after the scaly hide of a crocodile. The wounds have been pasted with ash and river mud and pummeled with bamboo bats, and are now drying in the heat of the blaze.

Reserved for men over the age of 20, this ceremonial ritual is conducted generation after generation in Papua New Guinea’s Iatmul culture, which holds that its people evolved from crocodiles. Witnessing this rite of passage is a rare privilege for outsiders—and one of several insider cultural experiences on a True North adventure through Papua New Guinea.

Lying just 99 miles north of Australia’s Cape York Peninsula, Papua New Guinea is arguably one of the world’s last true wildernesses. True North’s new routes through the country—the vessel will return this November with the 10-day Bismarck Bonanza and 12-day Sepik Soiree cruises (priced from about $15,850)—explore the sparsely populated region by land, by sea, by helicopter, and underwater. The trips span 70 nautical miles of the Sepik and follow reverse paths up and down Papua New Guinea’s north coast, connecting True North’s 36 passengers with communities along the river and on remote islands in the Bismarck Sea.

Onboard True North, guests of the 18 suites are served by a staff of 20 that includes two chefs formerly of Melbourne’s acclaimed Vue de Monde. Passengers gather in the well-stocked lounge bar, the casual dining area on the rear deck, and the extensive transom, which becomes a hive of activity each morning and afternoon as guests embark on fishing, snorkeling, scuba-diving, and cultural excursions.

Six aluminum-hulled tenders facilitate the outings, as do True North’s relationships with local guides such as Hank Liversidge. A university graduate and exploration site manager for several international mining companies, Liversidge accompanies passengers to islands where they might be greeted by an entire village of people performing a “sing-sing” wearing elaborate beads and feathers and carrying giant crocodile puppets. Cultural tours also visit lively markets and crafts vendors, whose works include intricately carved masks, grass skirts, and bilongs—simple string bags that villagers sling over their shoulders or across their heads, so called because everything inside “bilongs” to the wearer.

Thanks to guides like Liversidge—who looks forward to receiving his own crocodile-like hide next year—True North passengers gain unprecedented access and insight into these rarely visited communities and ceremonies of the Iatmul. “We are from the crocodile,” Liversidge says. “It’s our cultural belief—our trademark.”