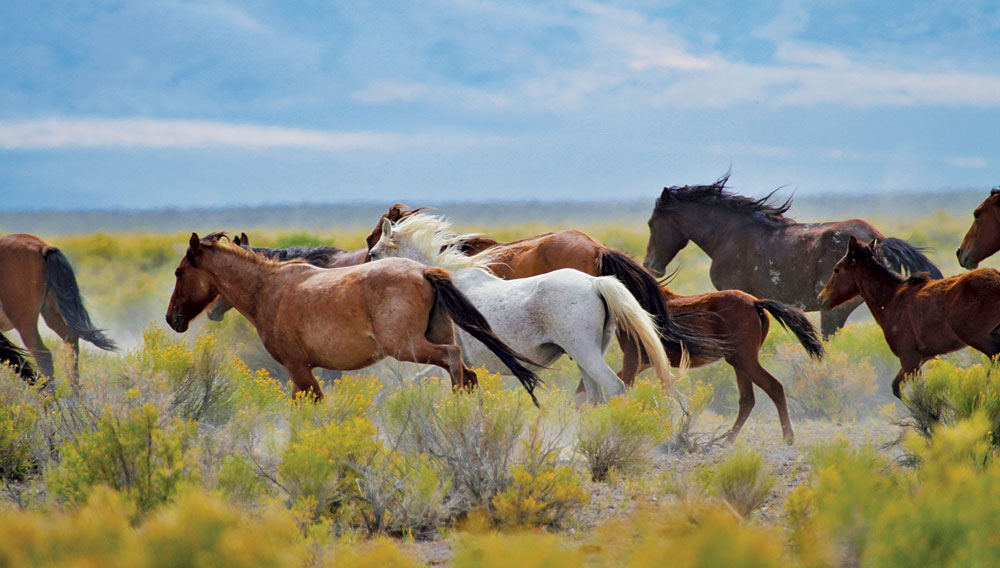 As the sun sets over northeastern Nevada, a palette of pastel colors washes over the region’s wide-open pastures and wind-whipped valleys. Rugged mountains frame this classic picture of the American frontier, which, judging by the rising dust cloud in the distance, is alive and well. Traversing the Goshute Valley, hundreds of mustangs race across the rangeland, the thundering of their hooves echoing off the rocky faces of the Ruby range.

For Madeleine Pickens, the founder of the nonprofit organization Saving America’s Mustangs, this idyllic image helps define U.S. history. “America was built on horseback,” says the horse breeder and billionaire. “[At one time] you could tell how rich a man was by how many horses he had.”

Today, however, many western farmers see mustangs as pests that deplete the resources on which their livestock rely—a view that has contributed to the mass slaughter of the animals. In a bid to save the region’s horses—and restore the wealth of the Old West—Pickens has acquired a 900-square-mile expanse around Wells, Nev., that will serve as a sanctuary for mustangs and travelers alike.

Pickens purchased the property, which she dubbed Mustang Monument, in 2010, and populated it with 550 wild horses that she saved from slaughter the following year. Located near the famously inhospitable Humboldt River Basin that plagued the Donner party in 1846, the retreat is opening as a one-of-a-kind ranch resort this June.

Guests at Mustang Monument will stay in one of 20 lavish tepees (priced from $1,000 per night, all-inclusive) adorned with patchwork quilts, leather armchairs, and handwoven tapestries. Adjacent to each tepee will be a private wood-cabin bathroom with a soaking tub. (Several log cabins, many with en suite bathrooms, are scheduled to open later in the year.) Meals will be served in a dining tepee, with evening entertainment ranging from live banjo concerts to games of poker over cocktails in the gaming tepee.

Mustang Monument will offer spa treatments and other amenities, but the property’s rustic terrain and wild inhabitants are clearly the main attractions. More North American safari camp than dude ranch, the resort will offer an experience Pickens compares with traveling to Africa to see the Big Five. “Malaria shots and passports are not needed,” she quips. True to this spirit, daily excursions include all-terrain-vehicle safaris to the surrounding valleys and mountains, where the preserve’s horses run free.

Other activities at Mustang Monument will include nature hikes, wagon rides, and horseback rides, on which sightings may include elk, deer, and mountain lions, in addition to Pickens’s horses. Adventurous guests will also have the option of overnighting under the stars, an experience made all the more thrilling when interrupted by the riotous sound of a galloping herd. “It is about saving something,” Pickens says: “the glamour of the West.”