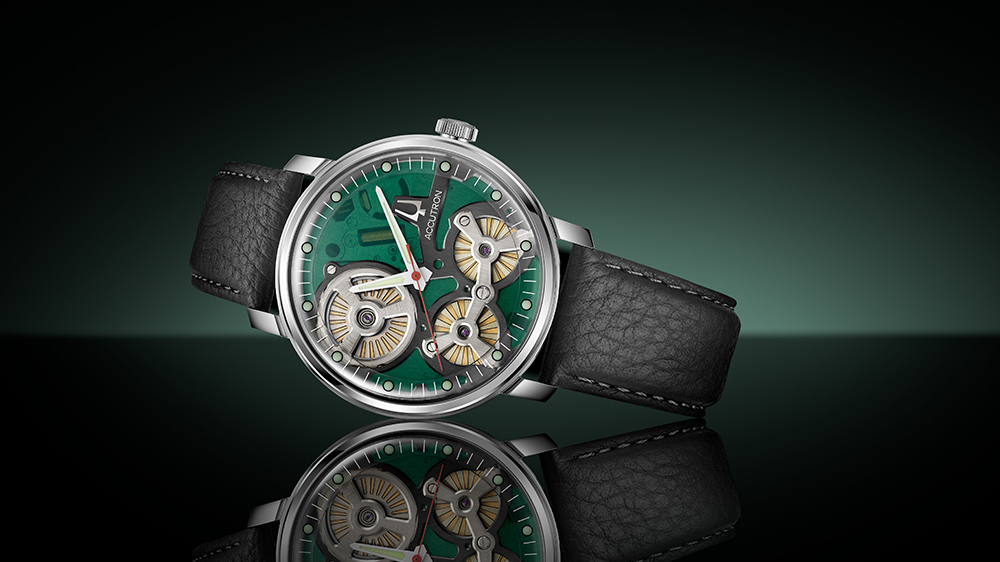 In the world of watchmaking, the word “movement” contains multitudes of definitions. Beyond its most straightforward meaning (a change in position or location), the term refers to the mechanism that makes a watch tick. But even that definition falls short of capturing the word’s horological complexity.

The vast majority of watch movements are either mechanical or quartz. The former relies on the release of energy built up in a mainspring that is wound either by hand or by an automatic mechanism, while the latter requires battery power to make the timekeeping mechanism work. Accutron, however, is famed for making watches that transcend these basic categories.

It all started in 1960, when the American watchmaker Bulova introduced the world’s first fully electronic watch, called the Accutron (a contraction of “ACCUracy through elecTRONics”).

In place of a tick-tocking mechanical watch movement, which employed a balance wheel and pendulum as its regulating organ, the Accutron featured a tuning fork movement that generated a hypnotic humming sound. The model marked a turning point in the history of watchmaking, not only because it pioneered an entirely new approach to timekeeping, auguring the introduction of quartz technology in the late 1960s, but also because of its radical design, which placed the inner workings of the timepiece front and center.

Six decades later, the brand that evolved from that original groundbreaking movement introduced another game-changing mechanism. For its Spaceview 2020 collection, Accutron unveiled an all-new and proprietary next-generation electrostatic energy movement using technology borrowed from other cutting-edge industries and applied to watches for the first time. A triumph of micro-engineering, the development marked the first time any company was able to harness electrostatic energy into something small enough to wear on the wrist.

The electrostatic energy is created by twin turbines that rotate at high speeds between two electrodes. The energy, stored in an accumulator, drives two motors: an electrostatic motor–first time used in a timepiece–to power the fluid second hand and a stop motor that powers the hour and minute hands. Both motors are synchronized.

In spite of all its technological prowess, however, Accutron has always been about more than just high-tech accomplishments. Since its inception, the brand has maintained a position at the forefront of the cultural conversation.

Accutron has also partnered with leading lifestyle brands—in addition to La Palina, they include Hudson Whiskey and Esterbrook Pens—to spread its message beyond the world of fine watchmaking. As the brand looks to the future, its reputation as a luxury timepiece brand—and conversation starter—is all but guaranteed.