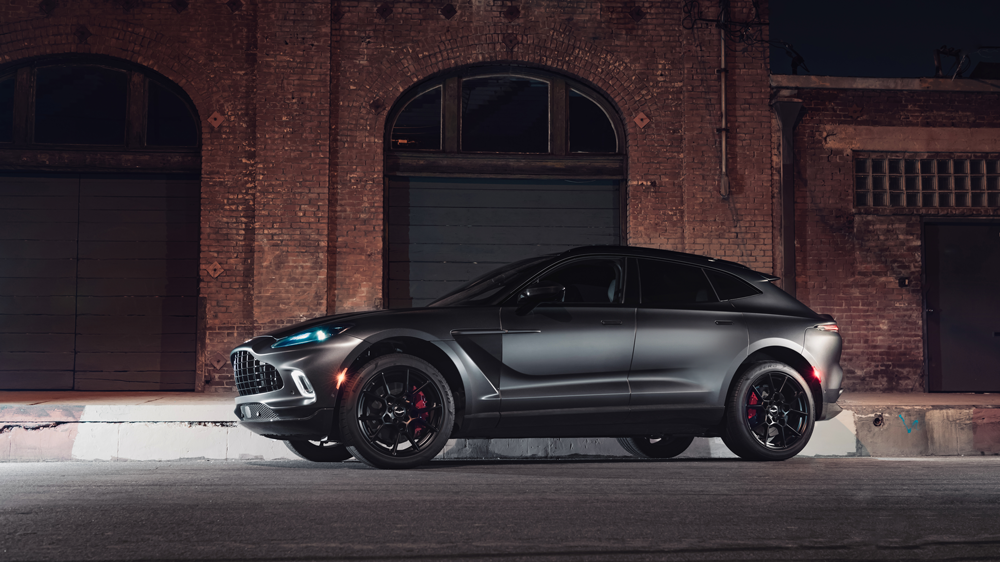 For the past 15 years, Hollywood has given us a grittier, edgier, more aggressive James Bond. With Daniel Craig in that iconic role, the ongoing film series introduced us to equally edgier Aston Martin vehicles, too. The world swooned over the DBS in Casino Royale and Quantum of Solace; while the DB10 enjoyed its own time in the spotlight in Spectre. The latest film in the franchise, No Time to Die, featured no less than four Aston Martins, including a concept version of the forthcoming Valhalla supercar.

Hollywood may still be searching for the next leading actor to fill the role of the world’s most famous special agent, but Aston Martin has already unveiled the next powerful vehicle in its own lineup. The DBX, which represents the British marque’s first foray into world of sport utility vehicles and one of many reasons why it still deserves its share of the spotlight.

The DBX is outfitted with a sumptuous Bridge of Weir leather interior.  Aston Martin

It starts at a brand new manufacturing facility in St. Athan, Wales, where each DBX will be constructed to the highest standards. That kind of attention to detail and commitment to high-quality craftsmanship is what has positioned Aston Martin as one of the world’s most heralded automakers for more than a century. With the DBX, the marque’s expert team of designers and engineers are continuing the brand’s legacy of creating captivating, sleek and sexy performance vehicles.

“It has been designed to deliver on the proportions that meet the criteria for beauty that we would always apply to the form language of any Aston Martin,” Marek Reichman, the brand’s executive vice president and chief creative officer, says of the DBX. “It has been created to be elegant, purposeful and unique.”

Yet, the DBX is alluring for so many other reasons than just its elegant looks.

Under the hood, an upgraded version of the 4.0-liter, twin-turbocharged V8 that propels the brand’s Vantage and DB11 churns out 542 hp and 516 ft lbs of torque. In the DBX, that engine spawns an SUV with a top speed of 181 mph and the capability to sprint from zero to 60 mph in 4.3 seconds. The engine is also paired to an active exhaust system, which means this utility vehicle can sound as exhilarating as its sports-car brethren; however, it can also be demure and refined when necessary—not to mention more fuel efficient thanks to advanced cylinder-deactivation technology.

The handmade enameled badge that adorns every Aston Martin is akin to a recognizable piece of automotive jewelry.  Aston Martin

The body of the DBX is crafted from bonded aluminum, a construction method that the British automaker has refined through the development of its sports cars. As such, the DBX body structure is remarkably light and stiff, producing a vehicle that is exceptionally dynamic both on the road and off. The DBX also features a new 48-volt electronic anti-roll control system, which renders traditional anti-roll bars obsolete and allows the vehicle to drive with the dynamism of a sports car. Want proof? In its most aggressive setting, that system can make the DBX as stable as the DB11.

Thanks to the incorporation of classic and modern Aston Martin design elements, the automaker’s new SUV still evokes the provocative nature of the brand’s heralded sports cars. It starts with the signature grill and bonnet blades, which can be specified in a number of special colors and materials, including satin chrome and carbon fiber. Additionally, the DBX features a bonnet that is emblazoned with a set of bespoke Aston Martin wings, each one handcrafted with a jeweler’s precision. It’s a small detail, but one that assures the uniqueness of every vehicle that rolls out of the automaker’s state-of-the-art manufacturing facility.

The DBX can be tailored to any lifestyle thanks to its all-wheel drive.  Aston Martin

Inside, seats are trimmed in full-grain leather, while eye-catching wood, composite and metal veneers can be incorporated in other areas throughout the cabin to personalize the vehicle to a wide range of tastes and styles. And then there’s the cargo space—class-leading cargo space, at that—which ranges from 22.3 cubic feet to 54 cubic feet when the second row seats are folded down. That amount of storage provides ample room for suitcases, golf bags and ski equipment.

“DBX is a car that will give many people their first experience of Aston Martin ownership,” says Tobias Moers, CEO of Aston Martin Lagonda. “As such, it needed to be true to the core values established in our sports cars, while also providing the lifestyle versatility expected of a luxury SUV. I can’t emphasize enough how incredibly exciting and significant DBX is for Aston Martin.”