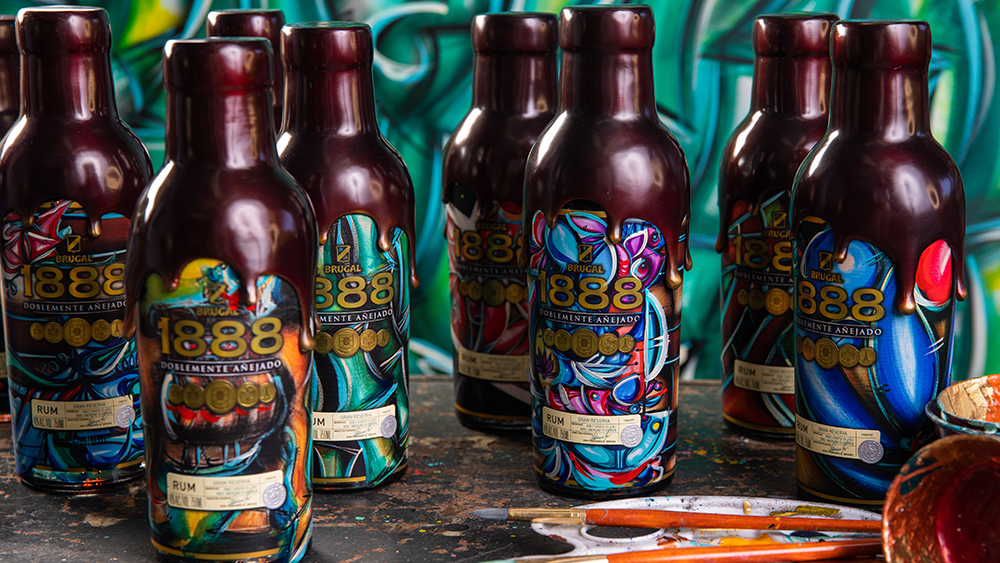 Home to more than 130 years of rum mastery, Brugal is one of the Dominican Republic’s oldest and most revered rums, with its influence and legacy extending globally. Since 1888, Brugal has been expanding the boundaries of the art of rum making. Imbued with a pioneering and innovative spirit, the brand has been writing the history of rum in the Dominican Republic for the past 130 years. In time for Miami Art Week, Brugal is unveiling a new art collection in collaboration with renowned Miami-based artist Alexander Mijares. Using the iconic Brugal 1888 rum bottle as his canvas, Mijares created 11 one-of-a-kind artworks that fuse Brugal’s history and rum-making process with the dynamic and vibrant Latin culture of Miami. Eight of the bottles will be made available to the public after December 1—seven for general sale and one to be sold at auction to benefit a local South Florida charity.

Mijares was born in Miami, but his family’s Spanish-Cuban heritage is evident throughout his paintings and sculptures. He has been named one of the “Top 10 Most Influential Artists” by the likes of Forbes and Elite Daily, and he has collaborated with everyone from Lamborghini to Pitbull. But the Miami Artist Collaboration with Brugal was unlike anything he’d done before. A trip to Brugal’s home in the Dominican Republic—where he learned about the brand’s storied history—helped flesh out the ideas he’d been developing. “It was amazing,” Mijares says. “After several days of experiencing the whole process of how they produce the actual rum, the product, I left super inspired.”

From the Dominican Republic to Modern Miami, an Artistic Connection

Mijares drew parallels between his own life and the legendary rum house’s storied history, and that connection is reflected in the artworks. One bottle depicts sugarcane, which is the foundation for Brugal’s rums and the source of childhood memories for Mijares, whose grandfather would give him and his siblings pieces to savor. Another depicts Cuba, the home of Mijares’ family as well as the country where founder Andrés Brugal discovered sugarcane and the art of rum making in the 19th century.

While some of the bottles feature art that harkens back to Brugal’s origins, others look to the present day and the future, such as “Miami,” which communicates the energy and movement of the Latin community in Miami. There’s also a tribute to Jassil Villanueva Quintana, the first female maestra ronera in Brugal’s 134-year history. In the piece, a woman is depicted holding a rose in the shape of a glass of rum, symbolizing how to “nose,” the ultra-premium rum to appreciate all its properties and characteristics, in the same way one would smell a rose.

Mijares found the concept of painting a story on something as intricate as a bottle of rum to be an exciting challenge. “When you’re given a four-inch by eight-inch canvas, it’s a little tight, but you find ways to make it work,” he notes. “And that’s also part of the process, how you take a beautiful story and shrink it to wrap around a beautiful product like Brugal.” The process of going from concept to finished artwork had many steps, beginning with ideas captured during his stay in the Dominican Republic: “I had tons of notes that I had taken while I was over on the trip. And then once I had those notes, it’s like, ‘OK, how do I convert text into an image? How can I portray what I want to get out in art?’” Following preliminary painting on canvases, he painted on the actual bottles. Bright colors were used to represent “the joy and the fun,” as Mijares describes it, of the environment at the Brugal distillery. “Whether I painted the cask or the mangroves or the tasting or any of these inspirational moments, having those vibrant colors and all the ways they were connected, I feel like, kind of coincides with their brand, their family and that whole network.” The finishing touch for each bottle is a bronze stopper reminiscent of dripping “black gold” molasses, Brugal’s finest raw ingredient. Each bronze stopper is meticulously hand-sculpted and hand-painted.

When seen together, Mijares says, the 11 bottles tell the story of Brugal: “When you line the bottles up, it’s almost like you are watching an old film reel … you can see where the brand started and where it is today.” However, each bottle also stands on its own. As he puts it, “you can show one here, one here, and then by looking at them individually, then you’re capturing special moments of their family, their company, the obstacles that they’ve endured and the love they shared for their brand and their product.”

Mijares’ one-of-a-kind works will be unveiled to the public at the Perez Art Museum’s Annual Art Basel Celebration on December 1, and eight bottles from the collection will be made available for purchase afterward. One piece, “Brugal Passion,” will be auctioned, with proceeds benefitting Special Compass, a South Florida–based organization that helps those with disabilities follow their passions; navigate life through education, sports and housing; and achieve their dreams independently through inclusion. “Brugal Passion” describes the never-ending pursuit of passion, a common goal shared by Brugal, Mijares and Special Compass. This is the only piece in the collection that also features an original, hand-shaped sculpture designed to hold the custom bottle.