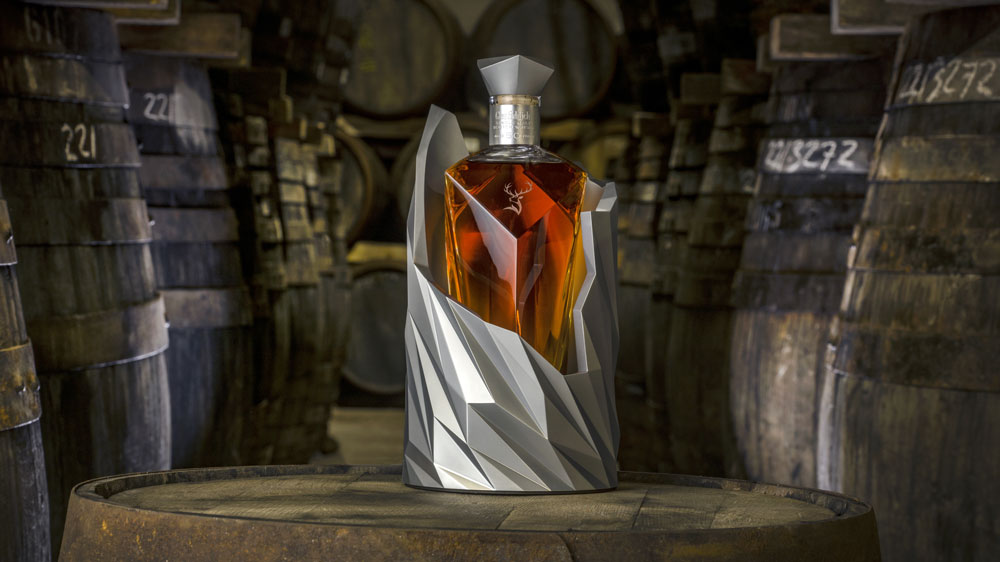 A whisky that has aged for 30 years or more while retaining its balance and vitality is a true rarity, a testament to both the people who distilled it and those who have shepherded it along the long road from cask to bottle. With the Time Re:Imagined series, Glenfiddich celebrates three distinct moments in its history with three extraordinary single malt Scotch whiskies, aged 30, 40 and 50 years.

“In whisky production, we often talk about the role of Malt Masters, and it is our responsibility to find the delicate balance between the taste of the whisky and the intensity of the oak cask,” says Brian Kinsman, Glenfiddich’s current Malt Master. “But we don’t always acknowledge how each cask, each bottle, is absolutely unique because of the time it has spent maturing. Both nature and time play huge roles in shaping a whisky’s flavor profile, and Time Re:Imagined pays homage to this process.” While nature is the ultimate force in shaping a whisky, it’s the Malt Master’s responsibility to work within its parameters to help guide a whisky to greatness. The three Time Re:Imagined bottlings have been fashioned as a tribute to the Malt Masters who helped shepherd them from cask to bottle. Kinsman, who has been at the helm with Glenfiddich since 2008, has overseen these whiskies, which were distilled on the watch of his two predecessors, Hamish Robertson (1960–74) and the legendary David Stewart (1974–2008).

This whisky emphasizes the moment, three decades after it was laid down, when the Malt Master decides the balance of spirit and maturation is ideal for bottling. Once it’s removed from the cask, its development is suspended. The design of the package conveys that moment, evoking the image of moving ribbons, each one frozen in time. These ribbons form cutout windows, revealing the simple, elegant bottle which appears to be suspended in mid-air. Bottled at 43% ABV, Kinsman describes the whisky as having “a rich, bronze color to it, with a taste that has deep, woody flavors combined with delicate floral accents that last for a long time in the mouth. It is like a deep rich Christmas cake, with a lovely syrupy fruitiness.”

What is cumulative time? With this expression, it’s four decades of frigid winters and warm summers pushing the evolving spirit in and out of the cask. It’s the angels taking their share each year, slightly reducing the volume of whisky in each cask and further refining what’s left. It’s generations of warehouse employees watching over those casks and guiding the liquid inside to its ultimate destination. For Glenfiddich, there’s also a component that’s unique among whisky distilleries, called “remnant vatting,” in which a bit of each batch is carried over to the next batch, ensuring both consistency and continuity.

The bottle is housed in a stunning sculptural container made from jesmonite, a stone-like material with individual characteristics that make every piece completely unique. Dramatic grooves carved into the jesmonite expose the intertwining veins that flow through it. Through each groove, the tri-corner bottle—topped with a dramatic jesmonite stopper—is visible, revealing the dark mahogany hue of the whisky within. Bottled at 44.6% ABV, “the dark mahogany color of this 40-year-old whisky hides the layered tastes of dried fruits, dark chocolate and ripe black cherries,” says Kinsman. “It is a decadent, intense drink that is both oily and luxurious in the mouth. It has a little something of past whiskies, including the taste of dates and raisins coupled with the sherry character of the cask it has been in for four decades.” Only 1,600 of these decanters have been made.

A whisky captures both a moment in time—when it was distilled and laid down in oak—and the long story of the years it spent aging. It’s like a snapshot and a history book at the same time, in liquid form. With this 50-year-old expression, the story is a long one indeed, and it’s told in unique fashion with every sip. The rarest of all the Time Re:Imagined expressions, with only 220 bottles produced, it’s also among the last surviving stocks of whisky distilled under the watch of Malt Master Hamish Robertson. In the early 1960s, Robertson oversaw the very first commercially available single malt (then known as a “straight malt,” as opposed to blended whisky) released in America.

The package in which the tri-corner bottle is housed is as distinct as the whisky itself. Its structure takes 50 years of climactic data—humidity, temperature and air pressure—from the Dufftown area where the whisky was distilled and aged. Computational architect Manuel Jimenez Garcia digitally mapped out that data, turning it into a bespoke 3D cylindrical sculpture. Its appearance is as stunning and original as the concept behind it.

Kinsman has a flavor profile in mind when deciding which casks to age for a half-century. “It is more about letting the distillery shine through,” he says. “I am looking for the casks that have more of the fruitiness than you would expect. The whisky, which has antique gold color, has matured over time to have the taste of rich orange peel and clementine meeting the complete notes of Madeira cake and Muscovado sugar. It has a lingering sweetness that softens into a deep, silky smooth oak tannin, giving you an overall taste that is more fruity, fresh and sweet than you would expect.” This historic whisky is bottled at 43.8% ABV.

The components that go into making a bottle of whisky—yeast, barley, water, oak—don’t add up to much without time. Time is the alchemist that turns those ingredients into what’s known in Gaelic as uisge beatha, or “water of life.” The Time Re:Imagined series honors those few casks that have endured far longer than expected, for reasons known only to time itself. As Kinsman says, “These 30-, 40- and 50-year-old whiskies are truly unique—they will have a unique flavor profile that can never be repeated. The older the whisky, the more it has experienced, so the more unique and rarer it will be.”