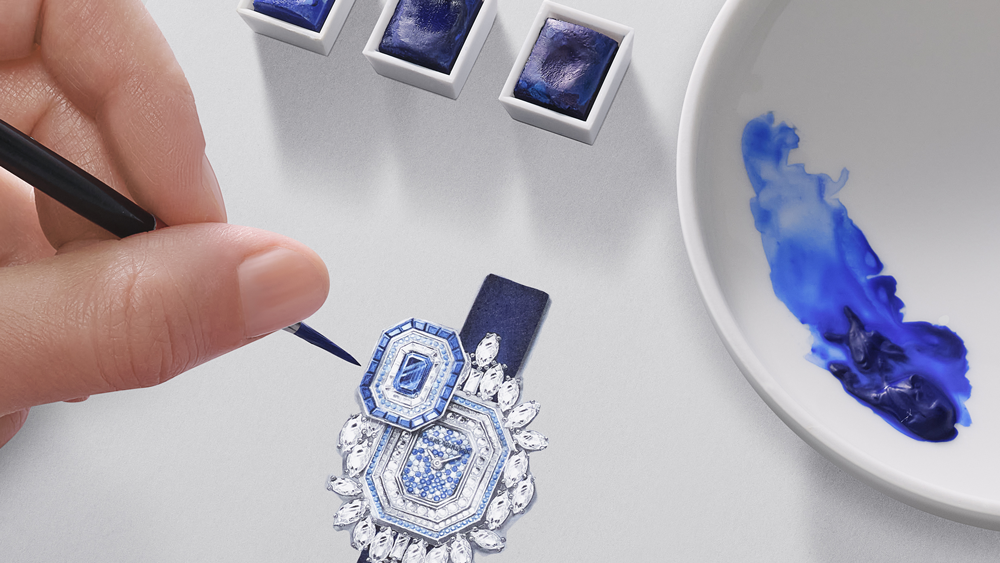 As diamond silhouettes go, the emerald cut, with its long, clean lines, mirror-like facets and understated elegance, is known for its regal bearing—one reason why diamantaire Harry Winston, also known as the “King of Diamonds,” was enchanted by it.

In fact, Winston so adored the elongated emerald-cut shape that he had some of the most important diamonds he acquired as rough—including the Jonker, a 726-carat diamond discovered in South Africa in 1934, and the Vargas, another 726-carater discovered in Brazil in 1938—polished into emerald-cut stones.

That legacy lives on today in details big and small, including the House of Harry Winston’s octagonal, or eight-sided, logo; the shape of the custom vitrines that appear in the brand’s retail salons worldwide; and, perhaps most persuasively, in the Emerald Collection, a series of timepieces that feature various dial colors and strap materials unified by a single shared characteristic: an octagonal-shaped case.

The collection was introduced in 2016, with the debut of an 18 mm model boasting a diamond-set bezel. New iterations of the timepiece have been added to the range over the years, culminating with the Ultimate Emerald Signature, the crown jewel of Harry Winston’s High Jewelry Timepieces collection.

Unveiled in 2014, the first Ultimate Emerald Signature high jewelry timepiece remains a pillar of the collection. Swathed in nearly 10 carats of diamonds, which required more than 100 hours to handset, it features a three-dimensional 18-karat white gold emerald-shaped case designed like a pyramid. The sides are flanked by tiers of brilliant- or baguette-cut diamonds of increasing dimensions, all leading to a 1-carat emerald-cut diamond at the summit. A surround of 24 marquise diamonds decorates the octagonal case, lending the piece a sense of movement as the differently angled stones reflect light in all directions.

Devised as a secret watch—the term refers to a timekeeping display that is hidden—the Ultimate Emerald Signature reveals the time, on a dial entirely paved in diamonds, when the upper part of the case is swiveled. The piece is designed such that the owner can wear it around the wrist, around the neck as a pendant or even as a brooch.

In 2021, the brand introduced four new versions of the timepiece, each dressed in varying assortments of blue sapphires and Paraíba blue tourmalines, taking the Ultimate Emerald Signature in a bold and colorful new direction.

The gem-set versions are identical in structure to the all-diamond version, including the pyramid-shaped three-dimensional case and the emerald-cut stone that sits atop it, but in this case the stone is either a Paraíba tourmaline or dark blue sapphire.

The color scheme, which serves as a subtle nod to the blue hue of the 45.52-carat Hope Diamond acquired by Harry Winston in 1949, toggles between shades of blue, from the neon-turquoise blue color of the Paraíba tourmalines to the more saturated dark blue and light blue shades of the sapphires.

The two timepieces set with tourmalines both feature dials set with 98 brilliant-cut Paraíba tourmalines; clients can choose a diamond-set case or one that features an alternating pattern of diamonds and tourmalines. By the same token, the blue sapphire models boast dials studded with a mix of diamonds and dark and light blue sapphires; they come in either a diamond-set case or a case that echoes the multicolor combination on the dial.

All five models—the diamond-only version as well as the four blue gem variations—come on satin straps finished with a white gold buckle blanketed with 29 brilliant-cut diamonds. (The all-diamond version gets a black strap, the blue sapphire models come on dark blue straps and the tourmaline models on turquoise-colored straps.)

An additional silk fabric bracelet gives clients a second strap choice. But they also have the option of wearing their Ultimate Emerald Signature timepiece as a pendant or necklace, thanks to the 18-karat white gold chain set with 12 brilliant-cut diamonds included with the model. And that’s not all: A clamp system on the back of the case allows its wearer to style the piece as a brooch.

With its wealth of scintillating and sophisticated details, the Ultimate Emerald Signature timepiece is as much a testament to the enduring appeal of precious stones as it is to Harry Winston’s historic, and visionary, fascination with form. In good shape, indeed!