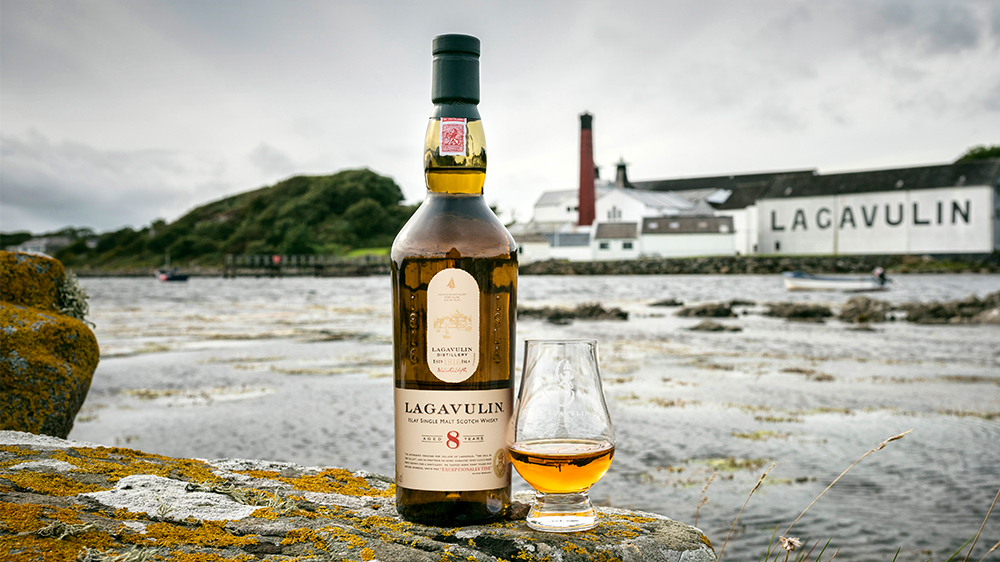 Islay is a small, rocky island off the western coast of Scotland, whose population boasts more sheep than people. It’s not the most hospitable of locales; the default weather is chilly and foggy, with a good chance of cold rain. But it’s from this remote outcropping that much of Scotland’s finest and most celebrated whisky comes. And some Scotch fans would say the finest and one of the most respected of them all—oftentimes referred to as the godfather of Islay single malts—comes from the distillery known as Lagavulin.

Gaelic for “the hollow where the mill is,” Lagavulin has officially been producing its legendary whisky since 1816, but illicit distilling had been going on there for decades before it was licensed to do so. The secret ingredient that makes Lagavulin so distinctive isn’t a secret at all. The peat that covers much of Islay has been used as fuel for centuries, and it’s still used to fuel the fires that roast, or malt, the barley used to make Lagavulin. It also imparts its flavor to the water used in the distilling process. The terroir of Islay is in every bottle of Lagavulin, and with each sip you’ll feel as if you’re warming yourself by an open fire while breathing in the salty sea breeze.

Lagavulin prefers to keep its range of whiskies to a minimum. After all, why tamper with perfection? The best-known Lagavulin is its signature 16 Year Old expression. Like all Lagavulins, the 16 has one of the longest distillation times of any whisky, which helps capture more of the richly peated flavor that’s the hallmark of the brand. Smoke, seaweed, iodine, oak and sea air are underpinned by a gentle, fruity sweetness that lasts light through the long and lingering finish. Bottled at 43% ABV, it has a rich, oily body that gently coats the palate.

Aged only half as long as the 16 Year Old, Lagavulin’s 8 Year Old expression is the newest and youngest addition to the family. It’s proof that a whisky’s greatness doesn’t come solely from time in the barrel. While its mouthfeel is somewhat lighter than that of the 16, its flavor is enormous, with powerful notes of charred oak and minty dark chocolate accompanying its maritime-campfire aroma. Its finish is long, smoky and sweet. It’s fascinating to sip the 8 alongside the 16 to see what a difference those extra years in the barrel both add and subtract.

Two annual releases, made in limited quantities each year, display the expertise and artistry of the distillers and blenders who craft each Lagavulin release. The 12 Year Old is aged in refill American oak casks and is the only Lagavulin to be bottled at cask strength, which varies from year to year. The higher proof brings forth a powerful peat smoke on the nose, but a surprising sweetness on the palate, along with dry smoke, a bit of salt and a rich, smoky, slightly bitter finish. The Distiller’s Edition is aged for roughly 15 years in refill American oak before being finished for 3–6 months in Pedro Ximenez sherry casks, imparting beautiful raisin and saline notes to the classic smoky Lagavulin profile.

One of Lagavulin’s biggest fan’s is actor Nick Offerman, who is passionate about Lagavulin and lets everyone know it. Offerman and Lagavulin have worked together since 2014, and in 2019 the brand honored him with his own bottle.  Offerman helped select the barrels for the 11 Year Old Offerman Edition, and it turns out he’s as fine a whisky picker as he is an actor. In 2020 Lagavulin launched a limited-time father-son creation in partnership with Nick and Rick Offerman. This 11 year old Lagavulin Single Malt Scotch whisky is finished for four months in barrels that previously held Guinness beer. The result is a glorious adventure in “sweet peat” by combining the intense pear and charred wood notes of the Lagavulin with the roasted coffee, dark chocolate and sweet caramel notes from the Guinness casks.

Lagavulin isn’t a starter whisky. It’s not an easy sipper. It’s challenging, and immensely rewarding. It’s the kind of whisky that’s introduced and passed from one generation to the next—it’s been that way for 205 years and counting. In fact, it’s the ideal whisky to share with the fathers in your life this Father’s Day . . . because it’s the ideal Scotch whisky.