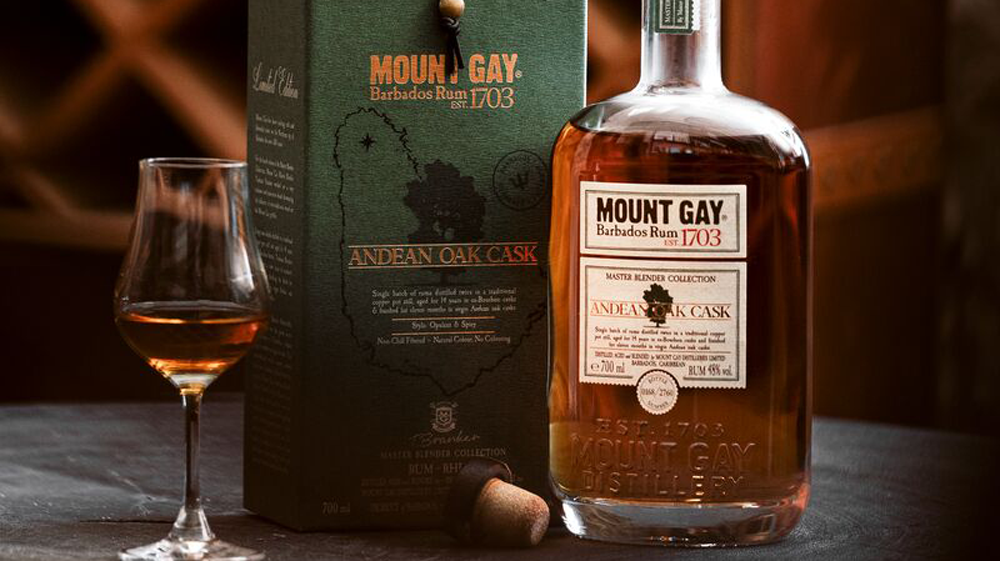 Mount Gay Rum knows a thing or two about tradition. The Barbados-based brand is the oldest continuously operating rum distillery in the world, having celebrated its 318th birthday in 2021, and is also one of the rum world’s leading innovators. In 2018, the brand launched its Master Blender Collection, an annual limited-edition release demonstrating Mount Gay’s expertise, craftsmanship and passion for innovation that pushes the boundaries of rum making. The collection made its debut with Allen Smith’s groundbreaking XO: The Peat Smoke Expression, one of the first-ever peated rums. In 2019, Trudiann Branker’s first year as Master Blender, she released the fascinating Pot Still Rum, separating the pot-distilled rum from the column distillate that is normally blended in to make the classic Mount Gay we’re all familiar with. In 2020, she unveiled the highly acclaimed Port Cask Expression, a rich and multifaceted blend.

“When I began this year’s Master Blender Collection, a process started in early 2018, I knew I wanted to explore the use of barrels that don’t traditionally age rum,” says Branker. “Andean oak was one that my team and I tested, and it truly stood out. It was one of my first times working with a cooperage on a virgin oak barrel specifically for Mount Gay, so we were able to set the char levels.”

Andean oak is rarely used to age spirits and has never before been used by Mount Gay. “I wanted to push my boundaries further,” Branker says of the new expression. “Using a totally new cask paired with a traditional pot still rum created something entirely new, bold and layered that I think rum enthusiasts around the world will thoroughly enjoy.”

The expression consists entirely of pot still rum aged for 14 years in ex-Bourbon casks before being finished for 11 months in virgin Andean oak casks.

“Our biggest challenge, however, was understanding when the rum would be ready,” explains Branker. “We didn’t have any historical knowledge, as this is a new barrel type for our whole team, so we needed to monitor the rum very closely. After 11 months of testing, we felt the expression was perfected.”

The Andean oak imparts a spiciness distinct from the barrels Mount Gay traditionally uses, and it adds a unique twist to the fruitiness of the pot still rum. The nose is sweet and inviting, with strong notes of vanilla supported by notes of candied fruit and floral. On the palate, the spice from the Andean oak comes through, along with oaky, ripe pear, toasted coconut, almond and vanilla flavors. The finish is long and offers a spiciness on the palate that perfectly complements the fruity notes of the aged pot still rum.

“On a more scientific level, and what really peaked my interest, was that Colombian oak is really different from American oak,” says Branker. “The Cis-whisky lactone quantities are way lower, and these molecules are the ones responsible for the cocoa/vanilla notes usually found in American oak. On the other end, there seems to be more components which give spicy and smoky notes (guaiacol, isoeugenol) in Colombian oak.”

Of course, the Andean oak alone shouldn’t get all the credit. Mount Gay has been perfecting its technique for more than three centuries, in one of the most ideal places on the planet for making rum. Barbados is a coral-based island, which makes its water some of the purest in the world, and its native sugarcane is also among the finest found anywhere.

As the rum is aged in Barbados, the tropical climate accelerates the interaction between spirit, wood, and concentrating the aromas and flavors. The twice-distilled pot still rum is an ideal base on which to overlay the flavors imparted by the Andean oak.

“The marriage between the 14-year-old pot still rum and the Andean oak culminated in an expression which showcased my experience with this oak and highlighted the Pot Still rum,” says Branker. “The result truly is a rum that is uniquely Mount Gay with the influence of the Andean oak cask.”

Bottled at a robust 48% ABV and non-chill filtered to preserve all its natural flavor and color, Mount Gay’s Master Blender Collection: Andean Oak Cask is a one-time release limited to 1,026 bottles in the U.S. A collectible rum, to be sure, but it’d be a shame to keep this one unopened on the shelf.

This expression will be available at select premium retailers nationwide for $195 SRP in a 750 ml bottle. To find a bottle and to learn more, visit https://www.mountgayrum.com/rum/andean-oak-cask.

Find a Bottle and Learn More