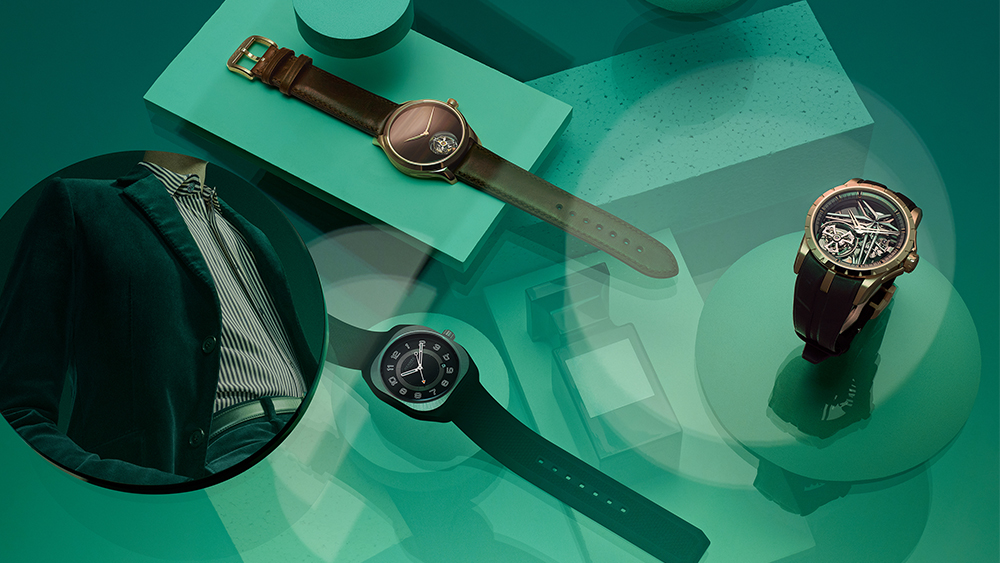 For watch lovers, springtime in Switzerland generally means two things: white asparagus is in season and a raft of new luxury timepieces is about to come to market. While you won’t find any spargel on MR PORTER, the world-class shopping and content platform is a direct conduit to all the new timepieces that made their debut at Watches and Wonders Geneva last week.

A showcase for the latest horological introductions from the leading names in fine watchmaking, the fair, which took place virtually April 7–13, has partnered with MR PORTER and its sibling site, NET-A-PORTER, for the second time to bring customers “first-to-market” access to the latest timepieces, including a slew of seductive green-hued models, elegant tributes to historic wristwatches and contemporary sport pieces. In addition, the sites will also feature live virtual activations, original content and enhanced shopping capabilities.

Of the 38 brands that participated in Watches and Wonders, MR PORTER will highlight 11, including Baume & Mercier, Cartier, Hermès, H. Moser & Cie., IWC Schaffhausen, Jaeger-LeCoultre, Montblanc, Panerai, Piaget, Roger Dubuis and Vacheron Constantin, through the lens of a single, spectacular novelty.

NET-A-PORTER, meanwhile, will feature a single piece from each of six participating brands, including Cartier, Hermès, IWC Schaffhausen, Jaeger-LeCoultre, Piaget and Vacheron Constantin. Here’s a sampling of the horological delights clients of MR PORTER and NET-A-PORTER can expect to see:

For the 90th anniversary of its classic Reverso wristwatch, Jaeger-LeCoultre has given the sunray-brushed lacquer dial of its Tribute Small Seconds model a lush green hue, evoking the pine forests that surround the watchmaker’s home in Switzerland’s Vallée de Joux.

The jaunty 45-degree angle of the dial of Vacheron Constantin’s new Historiques American 1921 hand-wound model is a tribute to the century-old wristwatch upon which this reissue is based. Unofficially known as a “driver’s watch,” the 40 mm 18-karat white-gold timepiece is the perfect, irreverent statement piece for this decade.

A brand-new collection from Hermès, the H08 line lives at the intersection of sport and dress styles, by design. Boasting a proprietary numeric font on the dial, H-shaped bracelet links and a webbing detail on the rubber strap that is similar to the brand’s coveted leather accessories, this 39 mm automatic watch with the graphene dial and round-within-a-cushion silhouette is guaranteed to be an instant classic.

Affectionately known as the “Bronzo,” the original bronze Submersible was introduced 10 years ago and quickly became one of the brand’s most-hard-to-get models. Although this 42 mm dive watch (PAM01074) is smaller and (hopefully) more accessible than its predecessor, it’s virtually guaranteed to be in high demand.

Downsized to a more wearable 41 mm case, the Pilot’s Automatic Chronograph in stainless steel is now equipped with the in-house calibre 69385; a quick-change strap system that allows for an easy switch between leather, rubber or stainless steel; and a bright green dial to complement the watch’s handsome façade.

The celebrated mountaineer (and Montblanc ambassador) Reinhold Messner solo-trekked across the Gobi Desert in 2004. To honor that achievement—as well as the brand’s historic Minerva manufacture, opened in 1858—Montblanc has introduced a new 1858 Geosphere automatic model limited to 1,858 pieces and decked out in the sand-colored hues of the Gobi’s starkly beautiful terrain.

Available through an exclusive pre-launch on MR PORTER, the 42 mm stainless steel Polo Automatic Chronograph is the perfect distillation of Piaget’s classic 40-year-old Polo timepiece in a version that is by turns sporty and sophisticated.

The single flying tourbillon at the center of Roger Dubuis’ new skeletonized Excalibur limited-edition harkens back to the original Excalibur model introduced in 2005. Limited to just 88 pieces, the manual-winding timepiece is encased in a non-tarnishing rose gold.

Learn More about the Watches