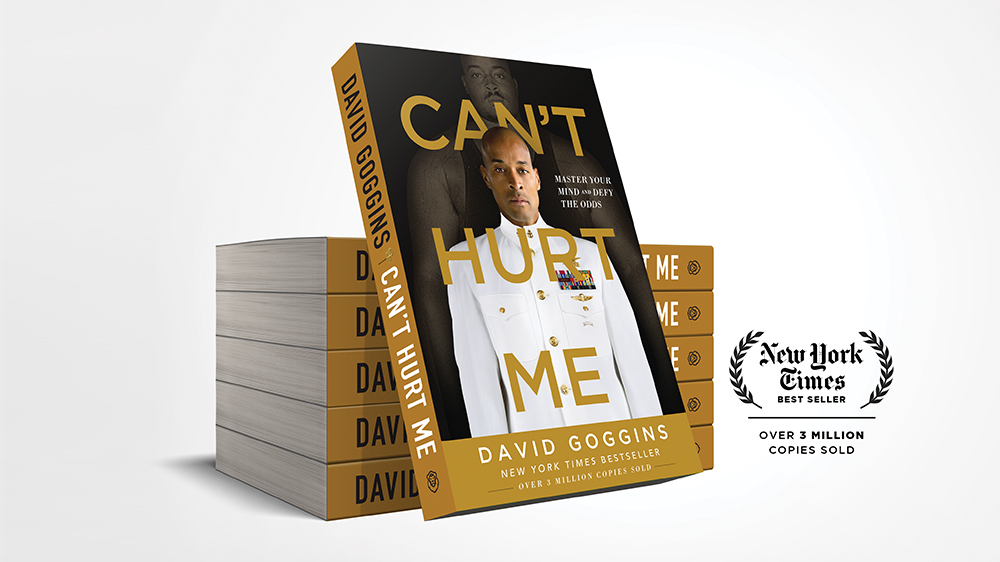 David Goggins’ childhood was a living nightmare filled with poverty, prejudice and physical abuse. But today his grand, aspirational dreams have come true. Through self-discipline, mental toughness and hard work, Goggins transformed himself from a depressed, overweight young man with no future prospects into a US Armed Forces icon, a best-selling author and one of the world’s top endurance athletes.

The only man in history to complete elite training as a Navy SEAL, Army Ranger and Air Force Tactical Air Controller, Goggins went on to set records in numerous endurance events, even inspiring Outside magazine to name him “The Fittest (Real) Man in America.”

After being profiled in Jesse Itzler’s book, Living With A Seal, Goggins’ visibility and platform grew. Based on that and some very popular podcast appearances, he was offered a multiple six-figure advance for a book deal from a major traditional publisher.

But Goggins was never one to take the traditional path. Despite the substantial financial advance dangled in front of him, Goggins (and his manager) did detailed research and asked important questions about royalties, payments and intellectual property. After all, this was his life story and deciding how best to put it out into the world was critical. “Your life and the journey you put yourself through—there’s nothing more than that,” says Goggins.

After carefully evaluating his options, Goggins turned down the multiple-six-figure traditional publishing deal—for someone who started his journey as an overweight exterminator making $6.25 per hour, this was a huge deal—and hired Scribe Media to publish his 2018 book, Can’t Hurt Me.

The book was an instant success. Goggins shares his astonishing life story, illustrates how most of us tap into only 40% of our capabilities (the 40% Rule), and illuminates a path that anyone can follow to reach their full potential. It immediately hit every best-seller list and has consistently remained there, selling over 3 million copies to date.

By eschewing traditional publishing in favor of Scribe Media’s professional publishing services, Goggins was able to apply his proven philosophies of independence and self-determination to his career as an author, as well as earn more than triple the royalties that he would have otherwise.

These cutting-edge, professional publishing services are available to you too. Scribe Media’s suite of professionals assist in writing, editing and publishing, and provide a top-notch marketing team to ensure books are introduced to the market with the utmost professionalism, quality and excellence.

In addition to David Goggins, Scribe Media has successfully worked with 2,000-plus authors, including 20 New York Times and Wall Street Journal best-sellers.

Will you be next?

For more information or to schedule a free consultation to discuss your book idea with a Scribe Media Author Strategist, visit scribemedia.com/goggins.