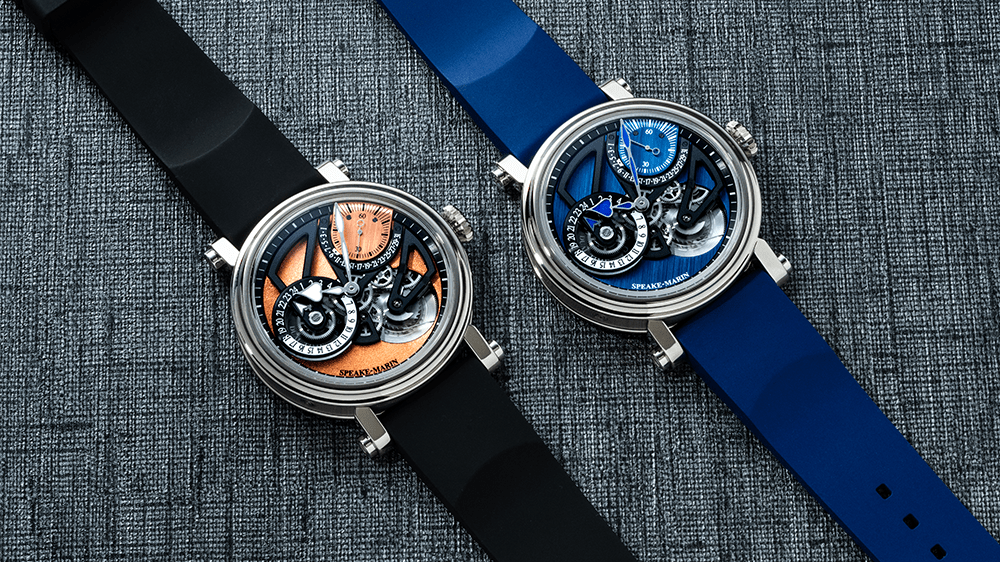 Speake-Marin is known for its unique, offbeat take on traditional watchmaking—one that draws us to independent watchmakers in the first place. Its very limited annual production—350 in 2021 and about 500 this year—in mostly limited series, adds the cachet of rarity to the brand, ultimately making it highly collectible. The One & Two Dual Time model, which first launched in 2019, was followed by last year’s Mint Green version in a 28-piece series that is long sold out. Now, there is another chance to own a One & Two Dual Time, this one a unique collaboration with Watches of Switzerland.

There are two references of the 42 mm watch, both with titanium cases, but one with a sporty blue metallic dial and the other, a salmon dial that transforms the watch for a more elegant, dressy affair. Ten of each will be produced, for a total of 20 pieces, 16 of which will be allocated to the US market, available exclusively at Watches of Switzerland stores in New York City and Las Vegas.

The One & Two Dual Time contains one of the brand’s iconic movements, the caliber SMA 02, made at Speake-Marin’s atelier in Neuchâtel, Switzerland, where the brand has been making its own movements since 2015. It is a dual time complication with retrograde calendar and hacking small seconds for accurate setting. The retrograde date display is set by a small pusher on the case side at 7 o’clock. Pulling the crown out to the first position allows you to set the local time zone without changing the home time on the 24-hour subdial or stopping the movement. The second position allows you to independently set the home time. It has a 52-hour power reserve.

It’s a great complication, not just because of what it does but because of how it looks. As part of the SMA movement family, its signature aesthetic is its openworked construction, including the offbeat position of the small seconds at 1:30, which normally appears at 6 or sometimes 9 o’clock.

The 42 mm wide by 12.5 mm thick case is not small, but it’s made of titanium, which keeps it lightweight. It’stopped with a slightly domed and cambered sapphire crystal that gives it a vintage look.

“Speake-Marin and Watches of Switzerland share British roots, making this partnership special in every respect,” says Christelle Rosnoblet, president and CEO Speake-Marin. Speake-Marin’s English roots are expressed in the brand’s Piccadilly case, with its screwed lugs, pleated crown and drum-like case shape, inspired by the movement holders’ founder Peter Speake-Marin (who worked as a watchmaker in his early years) and named after his seven years working for an antique restoration company in Piccadilly, London. The heart-shaped hands on the dial are inspired by those on the Big Ben clock in Westminster, London.