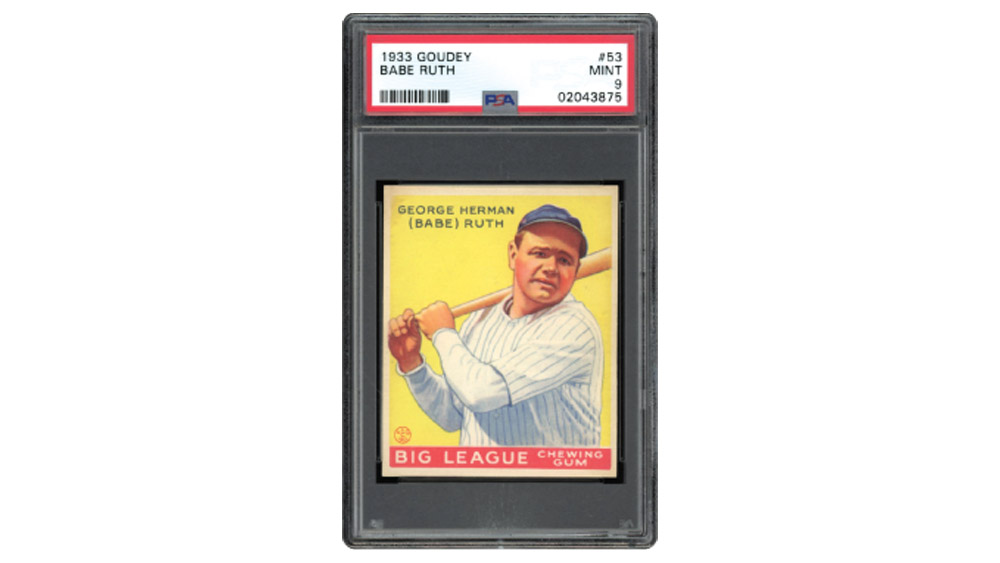 More than 73 years after his passing, Babe Ruth is still capable of breaking records.

A baseball card featuring the Sultan of Swat that’s considered one of the most iconic sports collectibles of all time will be auctioned off by California-based Memory Lanes Auctions early this summer, reports Barron’s. And in a year when trading card sales records have been set nearly every month, the card could easily become the most expensive of all time if it sells for more than $5.2 million as expected.

The card in question is one of four 1933 Goudey trading cards, a limited number of which came with a stick of trading gum. The card depicts Ruth, clad in the New York Yankees’s trademark pinstripes, swinging a bat against a yellow background. The card, which bears the number 53, has a Grade 9 rating from the Professional Sports Authentication service, meaning it is in mint condition and about as close as an 88-year-old collectible comes to being perfect. Not only does that make it the finest known example of the specific card, it makes it one of the finest known Ruth trading cards ever.

The Goudey Ruth card belonged to the late Florida neurologist Dr. Thomas Newman, who died of complications of Covid-19 in January at the age of 73, according to the magazine. The doctor’s entire collection, which includes over 1,000 baseball, football and hockey cards, will be sold at the same time. Other highlights include a Grade 8 1952 Mickey Mantle rookie card that’s expected to sell for $1 million, as well as cards featuring baseball legends Ty Cobb, Lou Gehrig, Honus Wagner, Ted Williams and Cy Young. The entire collection is valued at $20 million.

“This particular 1933 Babe Ruth baseball card is the finest known surviving example of its kind,” said JP Cohen, the auction house’s president, in a statement. “Dr. Newman purchased it in a private transaction about 25 years ago, and we believe he paid less than $20,000 for it at the time.”

If the 1933 Goudey Ruth card sells for more than $5.2 million at the auction, which runs from June 21 to July 10, it would become the most expensive sports trading card of all time. The title currently belongs to a Grade 9 Mantle rookie card that sold for that amount in January and an autographed LeBron James rookie card that tied the record last month. But with the way things are going, don’t be surprised if the record is set again before the summer, let alone the year, is out.