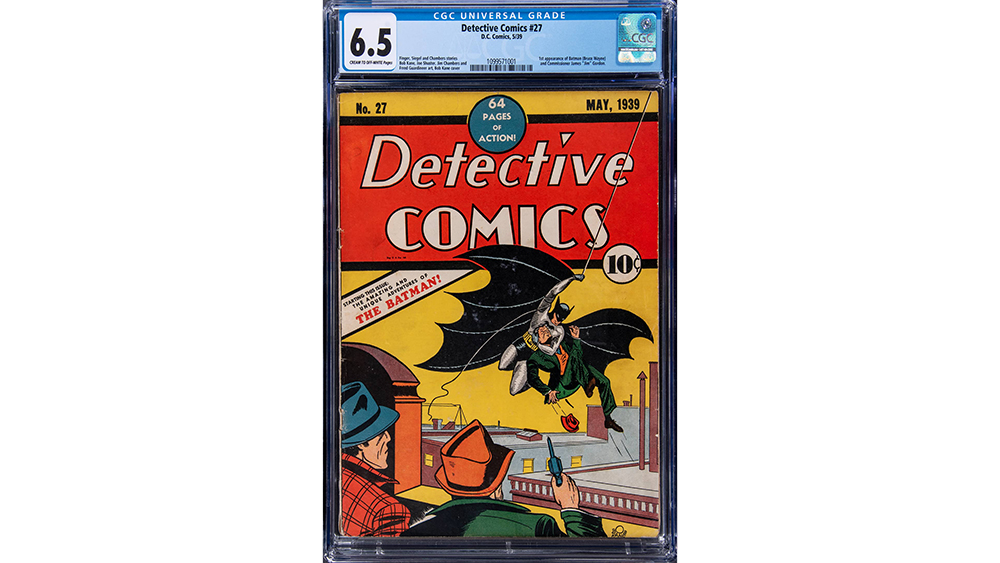 The comic book that gave Batman his wings is up for auction.

Goldin has just listed an original copy of 1939’s Detective Comics no. 27 in which the shadow-lurking vigilante made his debut. Bob Kane and Bill Finger’s six-page story “The Case of the Chemical Syndicate” introduces readers to a billionaire philanthropist Bruce Wayne and his alter ego Batman. The superhero went on to become a cultural touchstone worth millions. So too has his earliest comic books.

As one of 36 originally printed, this literary grail has been given a 6.5 grade by Certified Guaranty Company, a Florida-based comic book grading service. It’s one of just six copies to get that grade from the service, and only eight examples have been graded higher. Considering the comics of the Golden Age were printed on cheap paper, the 83-year-old pamphlet has held up remarkably well and is presented in good condition, according to the online marketplace.

A look at issue no. 27’s backside.  Courtesy of Goldin

It’s worthwhile noting that this hallowed issue features other stories, like “Speed Saunders: Killers of Kurdistan” and “Buck Marshall: Bullet Bluff,” but few resonated as much as the decidedly pulpy Batman panels. It’s easy to see why, too. The Dark Knight is depicted in a grimy Gotham city fighting for justice with Commissioner Gordon. The comic had a sense of realism that was missing from its contemporaries and, of course, a good amount of satisfying comeuppance for the baddies.

Although the Caped Crusader has been refined over time, he continues to be incredibly popular with audiences. The Batman by Matt Reeves, which was released last March and marks the tenth film focused on the superhero, made more than $700 million worldwide. Detective Comics is going strong, too. In fact, it’s the longest continuously published comic series in the US and still features strips dedicated to the Bat.

This is the book that started it all, though. And, as you might expect, it’s likely to pull in the big Bat Bucks. Heritage Auctions sold a 7.0-grade copy of the book for $1.5 million in 2020—the highest price ever realized for any Batman comic book. The auction house also sold an 8.0-grade copy for $1.1 million in 2010. This example, meanwhile, is sitting at $950,000 at the time of this writing, with 12 days left on the sale.