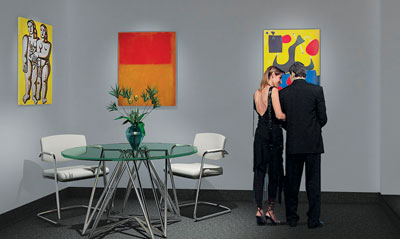 After selling the Palm Beach, Fla., art and antiques fair that they cocreated in 1997 (now called Palm Beach! America’s International Fine Art & Antique Fair), David and Lee Ann Lester found themselves adrift at sea for 15 months. Actually, the couple was relaxing aboard Fortunata, their 94-foot Ferretti Custom Line motor yacht, and the time that they spent exploring the East Coast of the United States from February 2003 to May 2004 yielded a unique concept that combines their passion for art with their love of the ocean. “Everywhere we docked, we ran into all our best clients from the Palm Beach fair,” says David Lester, explaining how those encounters prompted him and his wife to establish SeaFair, a company that plans to launch a small fleet of yachts catering to art and antiques enthusiasts. The first of those vessels, the $20 million, 228-foot Grand Luxe, will be in essence a self-contained, traveling fair, accommodating as many as 26 dealers and visiting ports along the East Coast. (Dealers will rent booths on the ship and reside in hotel rooms at the ports.) The yacht, which is under construction at Nichols Brothers Boat Builders in Freeland, Wash., should be completed by August 2006 and will debut at the Art Basel Miami Beach fair in Florida in December 2006. “It is a small, intimate, and highly exclusive private environment,” says Lester, who expects to spend $40 million on operating costs in the yacht’s first five years. “It’s almost the opposite of a fair.”

Grand Luxe’s 2007 schedule calls for it to visit Florida’s west coast in January, the Carolinas in April, the Hamptons in June, Nantucket in July, and Greenwich in September. Lester says that more than 40 dealers have made initial booking arrangements. “I have absolutely no doubt,” Lester says, “that it will be full by next year [2006] one way or another.”