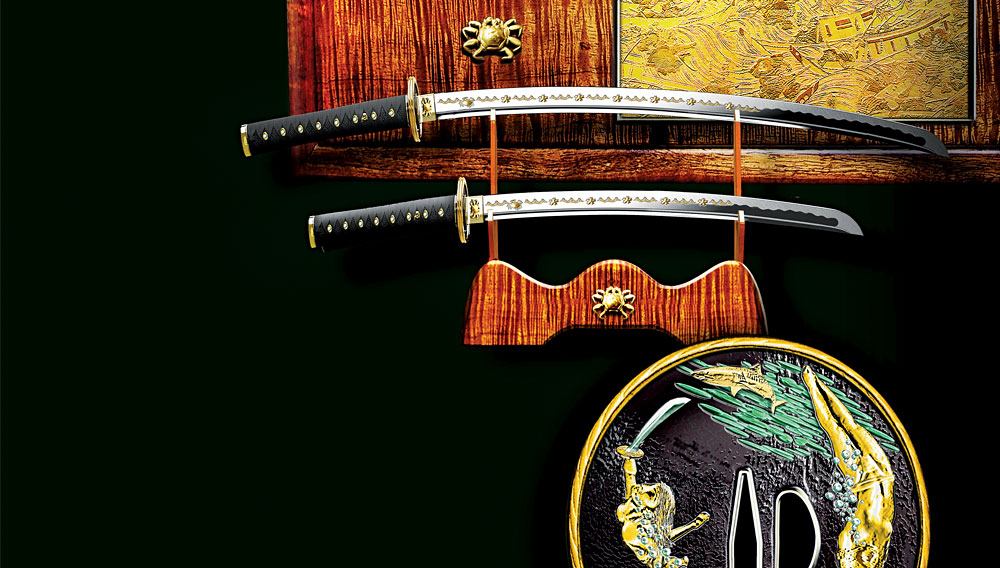 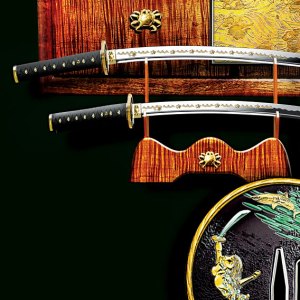 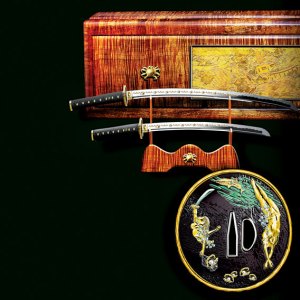 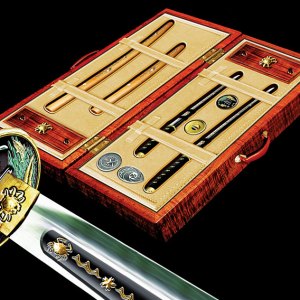 A set of two bejeweled samurai-style swords, with woodwork by Salter Fine Cutlery and blades of tamahagane steel handmade and engraved by the acclaimed Japanese swordsmith Shigemitsu Ito.

Accessories that include a set of sheaths, a handmade Hawaiian koa-wood case, samurai-style daggers, and stands for both swords.

™The Kusanagi sword is one of the three components of Japan’s imperial regalia (also known as the Three Sacred Treasures of Japan). The legend behind the items, which also include a mirror and jewels, holds that they were cast into the sea to avoid capture by the enemy during the Battle

of Dan-no-Ura in 1185. While the mirror and gems are said to have been recovered, many believe that the sword was never found. It is on this traditional tale that the American company Salter Fine Cutlery, along with the Japanese swordsmith Shigemitsu Ito, has based the creation of a samurai-style sword set for one Robb Report reader.

“The Battle of Dan-no-Ura is one of the most important and retold battles in Japanese history,” says Gregg Salter, the British-born, Hawaii-based craftsman and founder of Salter Fine Cutlery. “There is a poem about the lost Kusanagi sword within the Heike Monogatari [a book about the battle], in an appendix called ‘The Book of Swords.’ ”

An aficionado of Japanese folklore and history, Salter has created custom cutlery for more than 20 years and has worked with Japanese bladesmiths for the past four years. He will provide all of the woodworking for this gift, while Shigemitsu will craft the blades for the two swords. Based in Yamanashi, Japan, Shigemitsu is a licensed bladesmith who has been registered with the Japanese government since 1979. He trained under Sadoyoshi Enomoto and Shohei Miyairi, both of whom were certified by the Japanese government as living national treasures.

Shigemitsu will forge both of the blades for this gift from tamahagane steel. A single sample of this artisanal steel, which has been used for samurai swords for centuries, typically requires as long as 72 hours to produce, and only a small percentage from each batch is fit for a samurai-quality sword.

The blade of the longer sword included in this gift, a katana, will measure approximately 30 inches long; the blade of the other sword, a wakizashi, will be approximately 24 inches long. Shigemitsu’s engravings on the blades will feature a motif of waves and crabs, which are said to represent the fallen samurai at the Battle of Dan-no-Ura, as well as depictions of flowers (for luck). On the hand guard will be an image of a Japanese diver swimming along the ocean floor in search of the Kusanagi sword. Both swords will have diamond-shaped pieces of 18-karat gold with pearl accents decorating the wood handles, which will be wrapped in ray leather and silk binding for the grip. Nurizaya-wood sheaths and a set of display sheaths in a black-lacquer finish will feature, in gold, the same crab, flower, and wave motifs engraved into the blades.

Salter—who expects the gift will take a year to complete—will work with his fellow craftsman Dan Panoz, Shigemitsu, additional Japanese craftsmen, and a jeweler in Beverly Hills to produce the gift’s remaining elements. Accessories will include stands for both swords, a set of the kogatana daggers and kougai hairpins used by samurai, and all of the supplies necessary for the upkeep of the blades and woodwork. To store everything, Salter and company will craft a case from premium Hawaiian koa wood, with an interior of pigskin leather and a scene depicting the origins of the Kusanagi sword inlaid into the top.