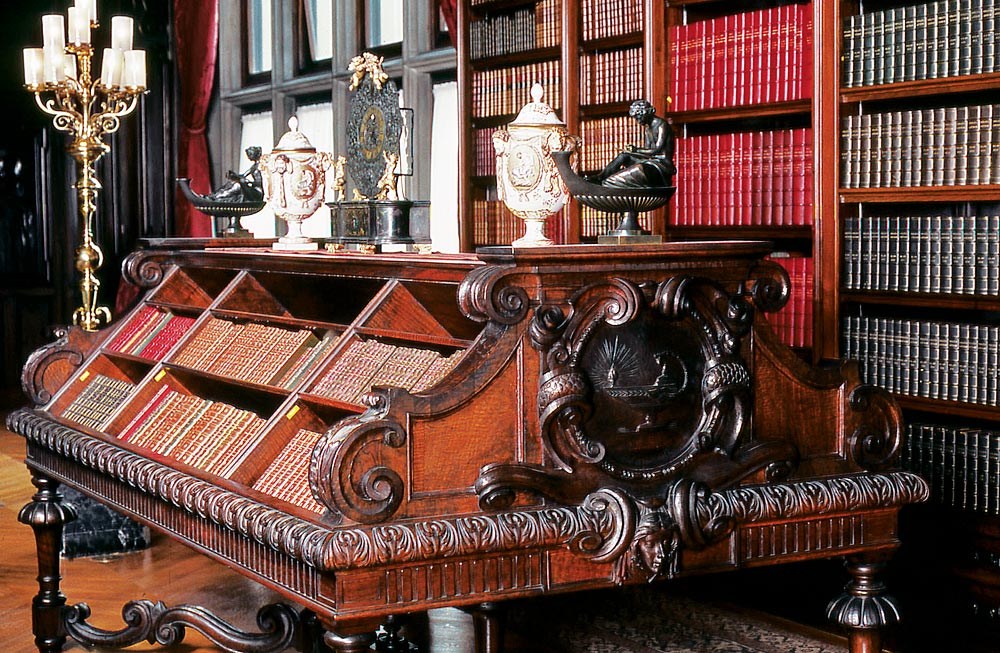 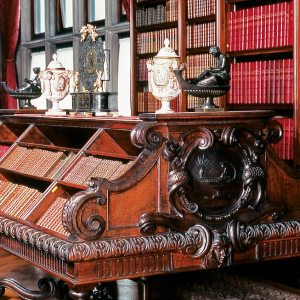 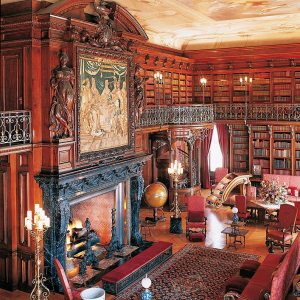 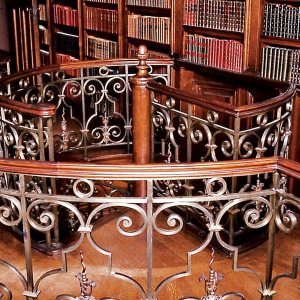 A custom-designed library inspired by the Vanderbilts’

America’s largest home, the 8,000-acre Biltmore Estate in Asheville, N.C., contains four acres of floor space, with 250 rooms spread out over four stories. In the late 19th century, George Washington Vanderbilt (the youngest son of railroad tycoon William Henry Vanderbilt) commissioned architect Richard Morris Hunt to create a restful mountain retreat in the style of a 16th-century French château. Vanderbilt opened his home to friends and family on Christmas Eve, 1895; with his wife, Edith, whom he married in 1898, he received such famous guests as William McKinley, Woodrow Wilson, Edith Wharton, and Henry James. The mansion, which embodies the extravagance of America’s Gilded Age, houses one of the first residential bowling alleys, a banquet hall with a 70-foot ceiling, an indoor swimming pool, a conservatory, and 34 bedrooms filled with the original works of such artists as Renoir and Raphael. Yet Vanderbilt’s favorite room was the two-story library.

According to his journals, Vanderbilt was a voracious reader who listed all of the books he completed—more than 3,100 from the time he was 12 until he passed away unexpectedly at the age of 51. Although astounding, this number is just a fraction of what he displayed in his library. The room—which measures 66.5 feet long, 34.5 feet wide, and 26 feet high—provides ample shelf space for the 10,000 volumes, many of them gilt-edged and leather-bound, that Vanderbilt chose to display from his collection of 23,000. The room is as much a gallery as it is a place to store literary treasures: Its ceiling is decorated with Giovanni Antonio Pellegrini’s 1720 painting The Chariot of Aurora, which originally was displayed in Venice’s Pisani Palace and comprises 13 canvases covering an area of 2,048 square feet. Architectural details include built-in bookcases, a spiral stairway, balconies with bronze balusters, hand-carved corbels, crown moldings, and, at one end of the room, a massive hand-carved fireplace.

“One of the things I love so much about the room—beyond the sheer magnificence of space—is that every time I go in there, I find something new I haven’t seen before,” says Thomas Riley, founder of the Naples, Fla.–based woodworking firm Thomas Riley Artisans’ Guild. Apart from the detailed plasterwork and artwork, Riley attributes the room’s brilliance to the organized detail in the wood carvings and in the ironwork around the fireplace. The room’s spatial scale makes one feel embraced rather than dwarfed. “I visit the library at least once a year, so I’ve come to know it fairly well,” says Riley, whose passion for the space has inspired him to create a similar room for one Robb Report reader, an undertaking that he estimates will require about a year for approximately 25 craftsmen, master finishers, and installers to complete.

Although the Biltmore library reflects the home’s French Renaissance architecture, Riley says that, should the buyer of this gift reside in a more modern dwelling, many of the room’s signature features could be reinterpreted to suit other styles. “We’re used to adapting historic elements into more modern homes. For instance, we might take a Baroque carving and apply the detailing to glass instead of wood,” says Riley.

Once the library is designed, the recipient of this gift will work with Washington, D.C.–based book consultant Kinsey Marable, who specializes in acquiring rare and out-of-print books. Among his more interesting challenges was tracking down a first edition of Walt Whitman’s Leaves of Grass, the first 250 copies of which were printed by the poet himself. With the understanding that an estate library should reflect the interests of the owner, Marable will begin the consultation by getting to know more about the buyer; he will then make appropriate recommendations. Marable says that a well-balanced 10,000-volume library includes the classics, biographies, novels, and histories, as well as books on architecture, food, sporting, fashion, and style. He estimates that such a diverse book collection—a mix of rare, out-of-print, and more-recent editions from the 18th through 21st centuries—will cost about $2 million (more than a quarter of the gift’s total purchase price); this figure, however, likely will vary according to the recipient’s personal tastes.

“There’s no such thing as a perfect library, but the best are those that have the capacity to grow along with the owner,” says Marable. “The only bad library is no library at all.”

The gift is available to one buyer • it includes all built-in bookcases, spiral stairways, balconies, hand-carvings, and ironwork; a hand-painted mural; 10,000 books; and the services of library consultant Kinsey Marable • The gift does not include furniture, tapestries, free-hanging artwork, window coverings, or travel expenses for the design staff and consultant • Because the gift can be customized to suit the recipient’s tastes and space requirements, pricing may vary.