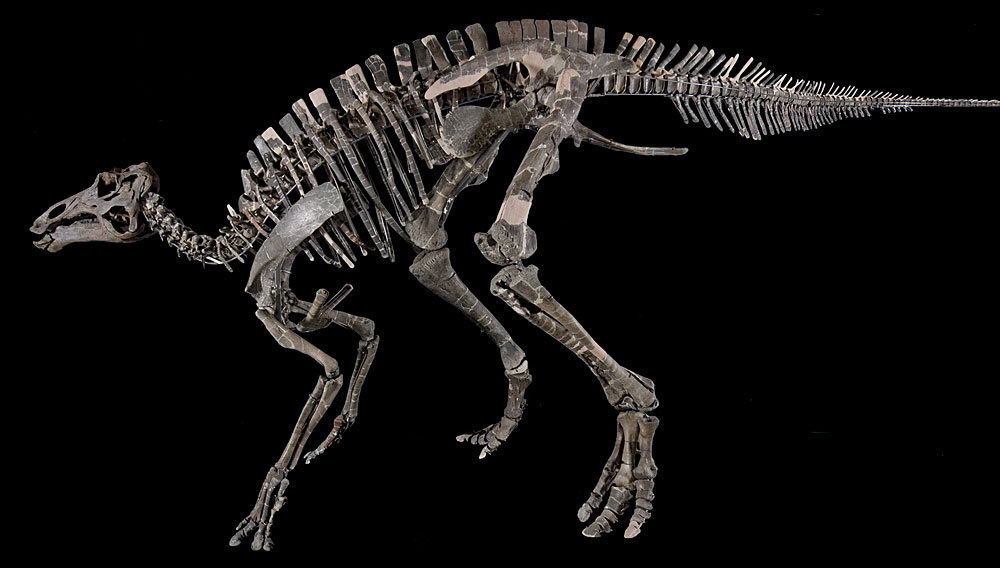 Deep in the Badlands of northwestern Montana lies a rock body, the Two Medicine Formation, where in 1979 an eccentric, bespectacled paleontologist, Jack Horner, and his friend Robert Makela found a most unusual specimen: the Maiasaura peeblesorum, or “good mother lizard.” Horner, who as the discoverer received naming rights, referred to it as such because adult bones were located near egg nests—a previously unknown phenomenon in the dinosaur world. “We found the first nesting grounds of dinosaurs,” Horner once wrote of the discovery. “We had managed to get a remarkably detailed record of what seemed to be one nesting season so many millions of years ago.”

After extracting and studying the bones, paleontologists determined that the Maiasaura was part of the larger Hadrosauridae, or duck-billed dinosaur, family. Weighing around 8,000 pounds and measuring up to 30 feet long and 10 to 15 feet tall, the Maiasaura lived in the late Cretaceous period, which spanned approximately 70 to 100 million years ago. It likely maneuvered mainly on its strong hind legs, which had feet with three toes; its delicate front feet sported four. Its contemporaries included the Centrosaurus, the huge Euoplocephalus, and the Daspletosaurus torosus, an early relative of the formidable Tyrannosaurus rex.

Further digging in Montana revealed tens of thousands of Maiasaura skeletons concentrated together, suggesting that, in addition to being nurturing parents, the nomadic herbivores tended to stick together to forage and breed. In 1985, Maiasaura became the first “dinosaur in space” after astronaut Loren Acton boarded the Challenger, for the Spacelab-?2 mission to orbit the Earth, with bone and eggshell fragments from the Montana find.

This particular skeleton, a 97-percent-complete composite—meaning the bones are authentic but hail from any number of different skeletons shifted and scattered over millions of years—measures about 23 feet long and 10 feet tall, and was found in the Two Medicine Formation. The skull is almost 100 percent complete, including many of its 150 or so ridged teeth, and the only missing structural elements on the body are the astragalus (an ankle bone) and the ungula (a toe hoof). “This Maiasaura is certainly one of the most complete known to exist—in fact, dinosaurs of any species don’t really get any more complete than this,” says David Hersko­witz of Heritage Auction Galleries, who is representing the consignor, Pangea Fossils.

Heritage Auction is well versed in the sale of prehistoric relics, having recently located and sold Triceratops, saber-toothed tiger (Robb Report, May 2009), and mastodon skulls for $250,000, $334,000, and $191,200, respectively. Pangea Fossils, a company whose inventory includes the bones of the second-largest Tyrannosaurus rex ever discovered, will provide the recipient of this gift with a line drawing of the skeleton indicating exactly which pieces are original and which are re-created, as well as any pathologies or scientific details found. The recipient will also receive the full provenance of the specimen, which has been authenticated by several experts, including Horner himself. In addition, Pangea Fossils will arrange, through Heritage Auction, for the disassembly, shipping, and reassembly of the skeleton at the recipient’s selected venue, and provide advice on maintaining the proper environment for the dinosaur bones.

The gift is available to an individual, gallery, or museum and must be purchased by January 10, 2010. The price includes disassembly, shipping, and reassembly to the location of the recipient’s choice.