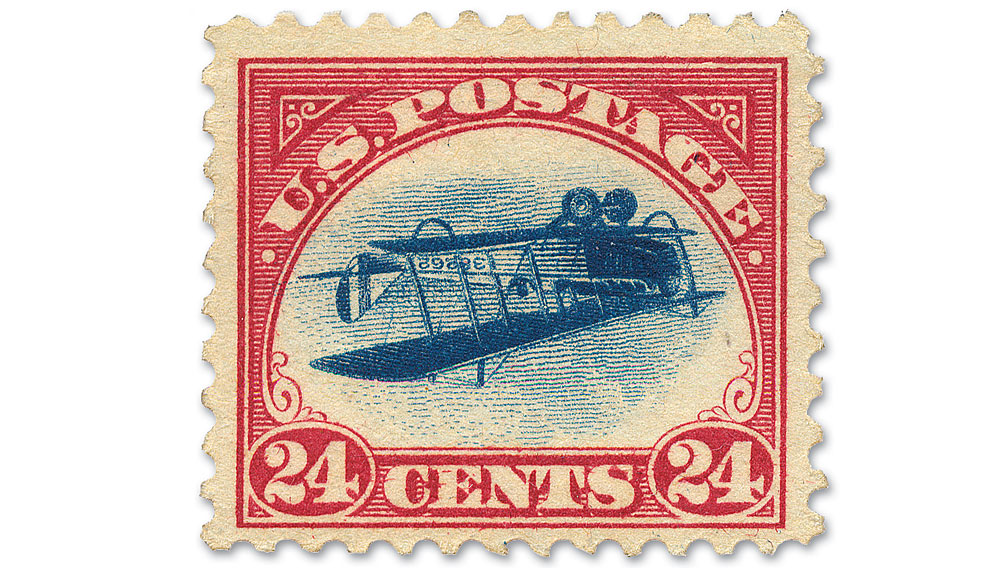 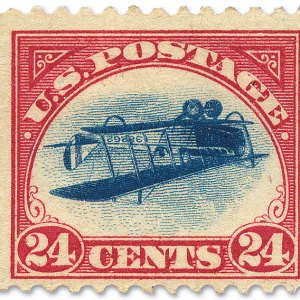 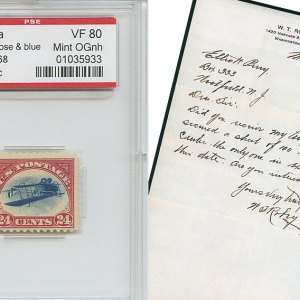 When stamp collector William T. Robey went to a Washington, D.C., post office during his lunch break, he was unaware that he was about to discover the most famous error in all of philately. Robey, who intended to add the nation’s first airmail stamp to his collection, was astonished when the clerk placed on the counter a fresh pane of stamps that bore a pronounced anomaly.

The year was 1918. The United States Postal Service, which had just instituted a novel service called “Air Mail,” issued a special two-color stamp to pay for this special method of delivery. Each 24-cent stamp displayed an image of the now-famous Curtiss “Jenny,” a bi-winged airplane operated by the U.S. Army Air Corps and used for the inaugural airmail flight conducted on May 15 of that year. But the exquisitely engraved two-color stamps on the counter before Robey featured a carmine rose frame in which a blue vignette of the Jenny was floating upside down.

Each sheet of 400 stamps was printed on a flatbed press and then quartered into four panes of 100 stamps each. Two colors required two passes through the press, and out of a run of 5,000 sheets—2 million individual stamps—only a single sheet was fed upside down during the second pass, yielding a squadron of aerobatic Jennys.

Recognizing their rarity, eagle-eyed Robey put down his $24—a substantial sum for a stockbroker’s clerk in 1918—and bought the full pane of errors. Since his auspicious discovery nearly a century ago, none of the other three panes of inverts has surfaced. Postal authorities most likely destroyed the remaining 300 stamps upon their discovery.

The astute collector quickly profited from his purchase, selling the complete pane to Philadelphia stamp dealer Eugene Klein for the colossal sum of $15,000. Klein flipped the stamps for a quick profit of $5,000 to New York collector Edward Green (called “Ned” by his mother, Hetty Green, the so-called Witch of Wall Street, featured in “From the Editors,” Robb Report, July 2009). In Green’s custody, the pane was broken up and dispersed to the four philatelic winds.

Known officially as Scott catalogue number C3a, each stamp from the original sheet is also assigned a plate position, numbered 1 through 100. Today experts estimate that 91 specimens of varying quality and condition remain. Seven are reported to have been destroyed, and two have been stolen. Many of the remaining stamps have fallen victim to improper handling, soiling, creasing, toning, thinning, and—of great concern to the most fastidious philatelists—hinging.

During the past decade, the values of investment-grade philatelic specimens have increased such that a universal standard of grading has been established. The specimen offered in this gift has been subjected to the rigors of grading and encapsulating by the Professional Stamp Experts, an internationally recognized third-party stamp-authentication service. C3a, position 68 is distinguished not just by its very fine condition, good centering, and bold color, but also by its pristine gum, which has never been hinged or disturbed by any inclusions. The stamp is one of no more than eight never-hinged examples known to exist and bears the grade 80, making it the highest-graded, never-hinged Inverted Jenny in the world.

When one considers that this is the first time this specimen has come to market in 50 years; that this is the finest-graded mint specimen extant; and that philatelic rarities are among the highest-performing tangible assets, one does not need Robey’s shrewdly speculative eye to recognize that such an opportunity truly does come only once in a lifetime.