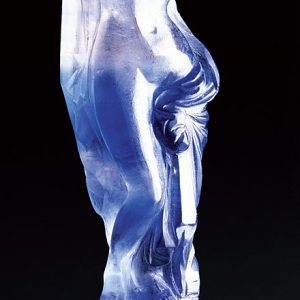 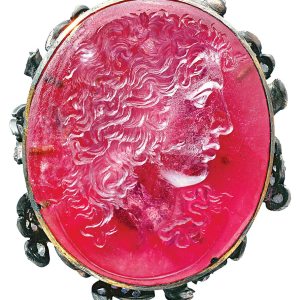 When Prince Felix Youssoupov—scion of a wealthy Russian family and one of the conspirators in the assassination of Grigori Rasputin—fled to Paris to escape the Revolution, he carried with him a few treasures. Though the pieces represented a miniscule portion of the immense Youssoupov fortune, they would have been regarded, by any standard, as a trove of riches.

Among these objects was a 4-inch-tall sapphire statuette of the goddess Venus perched atop a 116-carat spinel intaglio with a depiction of Medusa on its underside. One version of the figurine’s history suggests that Catherine the Great gave the piece to her alleged lover, Prince Nikolai Youssoupov (Felix’s great-great-grandfather); however, no official documentation exists to confirm how the sculpture—dubbed the Blue Venus—came into the Youssoupov family’s collection.

Nevertheless, in his 1874 book Diamonds and Precious Stones: A Popular Account of Gems, Louis Dieulafait wrote that, prior to being absorbed into Russia’s extensive collection of crown jewels, the piece belonged to the Duke of Orleans. Dieulafait also noted the remarkable size and quality of the stone, and the statuette’s meticulous carving.

“It’s a beautiful statue with a wonderful tactile quality when you hold it,” says Ralph Esmerian, a fourth-generation jewelry collector whose father, Raphael, purchased the figurine from Pierre Cartier in 1943, just a few weeks after Youssoupov sold it to Cartier in New York. “It has profound universality,” Esmerian says. “It’s a beautiful woman.”

Esmerian, the 68-year-old owner of the New York–based jewelry company Fred Leighton, says he has never seen another sculpted sapphire of such high quality and scale. Judging from its sky-blue hue and clarity, he is convinced that the stone was mined in Ceylon (now Sri Lanka). He also suspects that the 18th-century carving was likely joined to the spinel-and-diamond intaglio (which came from the Duke of Brunswick) by the Youssoupovs in the 1870s. By the time his father acquired the work, both the figurine and the intaglio were mounted on a Fabergé stand of emeralds, rubies, and diamonds. “Father didn’t like Fabergé’s work,” Esmerian says. “He thought the mounting conflicted with the statue, so he removed it.”

Having handled the sale of some of the world’s celebrated treasures, including examples from the French crown jewels, Esmerian has developed an eye for superior workmanship. “This statue is human creativity and craftsmanship at its best,” he says. “Before the Revolution, the Russians had the greatest jewelry market—even greater than Paris or London—and this carving is an acknowledgement of the Russians’ exceptional taste for gems and jewelry.”