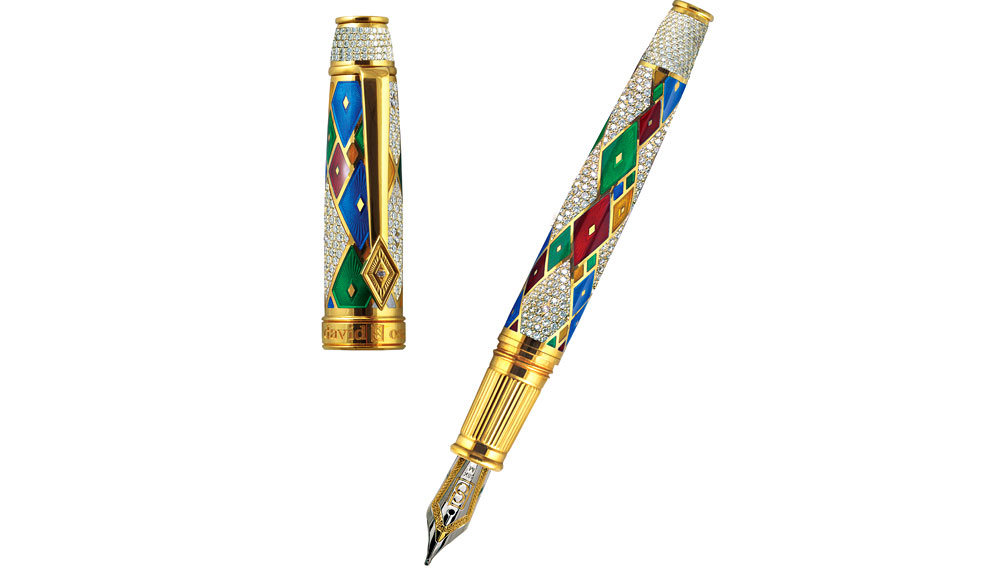 It took only 11 years for David Oscarson to reach the upper echelon of fine pen making, a level that has been dominated for centuries by European brands such as Montblanc and Graf von Faber-Castell. Oscarson, meanwhile, is young, American, and—as the sole designer at his St. Louis–based company—guided wherever his quirky interests may lead.

Oscarson has created fine writing instruments inspired by the changing seasons, historical figures, his Swedish heritage, and even the Mayan-predicted apocalypse in 2012. He produces smaller releases than the big European brands—almost never more than 88 pieces—and they tend to be more colorful, too: His fastest-selling collection was a polka-dotted design based on the commedia dell’arte characters Pierrot and Pierrette. That 2005 release, a pair of his-and-hers pens, celebrated the romance of the bumbling, love-struck clown Pierrot, who pines for the attentions of Pierrette. Alas, the story does not end there: Pierrette eventually drops Pierrot for the mischievous Harlequin. This fall, Oscarson completed the love triangle by releasing his own playful Harlequin design, the pen’s barrel swathed in the patchwork-diamond pattern of the character’s costume.

Oscarson will create 88 examples of the standard Harlequin with blue, black, and white versions in sterling silver and red and green versions in gold vermeil. But one Robb Report reader will have the opportunity to purchase a Harlequin set that truly steals the show: a set of five unique special editions, rendered in 18-karat yellow gold and inset with roughly 25 carats of rubies, sapphires, emeralds, and black and white diamonds. Each pen will exhibit Oscarson’s signature enamel on guilloche, a technique popularized by brands such as Fabergé in the late 19th century that involves patterns created by multiple engravings in the metal that are then fired with translucent, colored enamel. The treatment allows light to play off of the intricate guilloche pattern underneath, and “the yellow gold really glows, even more than on the silver,” Oscarson says.

The jeweled pens will take about a year to produce because of the additional care needed to handle the sapphires, emeralds, and rubies, which can chip if improperly set. The use of four colors of hard enamel on each pen complicates the effort, too, as each color requires five to six firings at specific temperatures. Every time a pen is fired in the kiln, there is a risk that the solid gold barrel will cool more quickly than the enamel, shattering it and requiring the whole process to begin again.

“The irony,” Oscarson says, “is that the characteristics of Harlequin’s brash and flamboyant nature will only be achieved through months and months of meticulous care and dedication.”