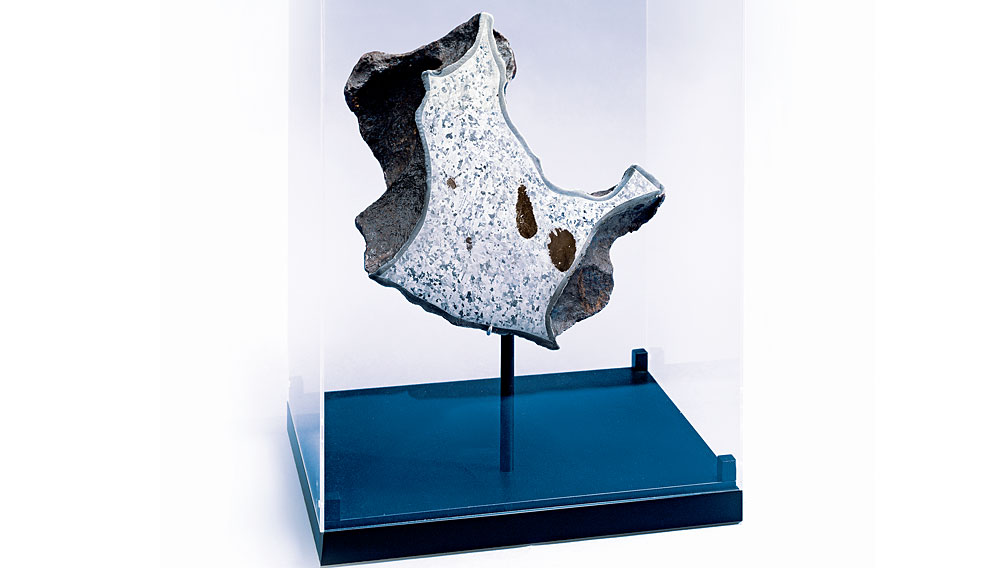 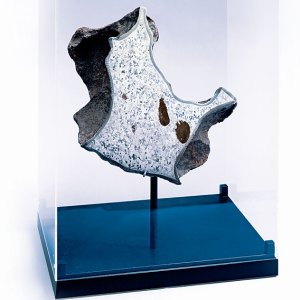 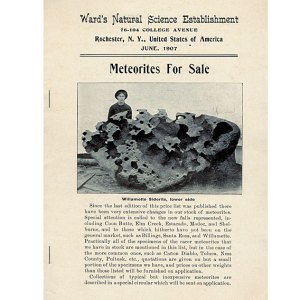 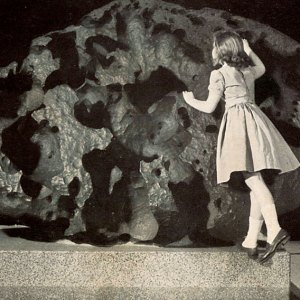 A nearly 30-pound piece of the famed Willamette meteorite.

The Willamette meteorite could be compared to the Mona Lisa. Just as the fame accorded to Leonardo da Vinci’s masterpiece transformed it into an international symbol for fine art, the Willamette, which has been viewed by some 50 million people over the last century, has come to represent all extraterrestrial rocks that land on this planet.

Weighing 15.5 tons, it is the largest meteorite ever discovered in the United States and the sixth-largest meteorite found anywhere on earth. The Willamette belongs to New York’s American Museum of Natural History (AMNH), which displays it in the Rose Center for Earth and Space at its facility on Manhattan’s Upper West Side.

The Willamette’s more recent viewers may have noticed a flat area at the top, or crown, of the meteorite. It looks as if someone sheared off a piece of the celestial treasure. And indeed someone did. In 1997, the museum removed a chunk measuring 9.5 by 11 by 6.25 inches and weighing nearly 30 pounds and gave it to meteorite collector and dealer Darryl Pitt. In exchange, Pitt presented the museum with a piece of a Martian meteorite—an extremely rare find—that was recovered in Brazil.

Pitt is offering a Robb Report reader his Willamette specimen—and the bragging rights that go along with it. “Sometimes I’ll say I have it,” says Pitt, a former professional photographer who, in addition to running his meteorite business, also operates Depth of Field Management in Man­hattan, which oversees the careers of a number of jazz performers (Pitt was the official photographer of the Montreux Jazz Festival from 1979 through 1986). “Sometimes people look at me like I’m telling a joke. And I say, ‘No, really, I have it.’ And then I explain.”

Because Pitt’s specimen was cut from the larger meteorite, its internal structure is exposed, revealing the Willamette’s unique crystallization pattern. “What you’re looking at are crystals of naturally formed nickel-iron alloys,” he explains.

The Willamette’s composition indicates it came from a planet that broke apart billions of years ago, when our solar system was in its infancy. It appears to have suffered two separate impacts while hurtling through space—it may have collided with other pieces of its planet—before it came to rest in its namesake, the Willamette Valley in northwest Oregon.

In 1902, local miner Ellis Hughes announced that he had discovered the meteorite on his land, and charged admission to view it. A sharp-eyed attorney for Oregon Iron & Steel, which owned the parcel adjacent to Hughes’ lot, noticed ruts and drag marks leading from the company’s land to the miner’s and successfully sued to claim ownership of the meteorite. Before selling the Willamette to the AMNH, the steel company displayed it at the 1905 Lewis and Clark Exposition, a World’s Fair–like event held in Portland, Ore., where more than a million people viewed the meteorite.

Pitt says that this is an increasingly rare, if not unique, opportunity to own a piece of the Willamette—or a generously sized portion of any meteorite—because the AMNH and other museums with similarly impressive space rocks have ceased swapping specimens. “In my experience, there’s no analog to this,” Pitt says of this gift. “No one can have a piece of the Rosetta Stone. No one can have a few carats from the Hope Diamond. To own a conspicuously missing part of the crown section of a meteorite at one of the preeminent museums in the world is incomparable.”

To a natural-history enthusiast, it might be comparable to possessing a scrap of the Mona Lisa.

The purchase price does not include the costs of shipping and insurance.