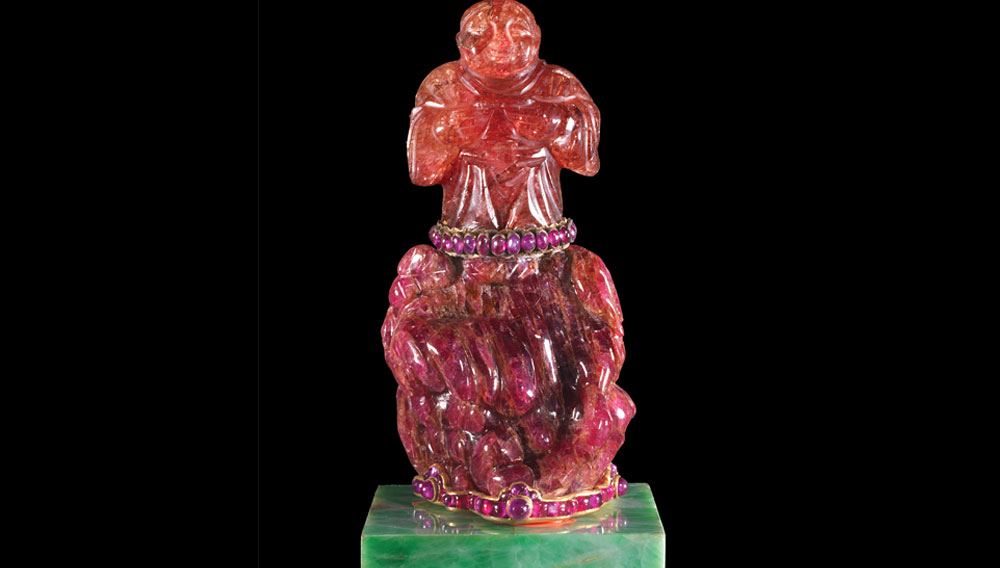 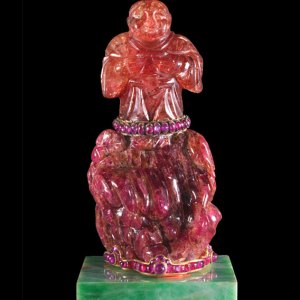 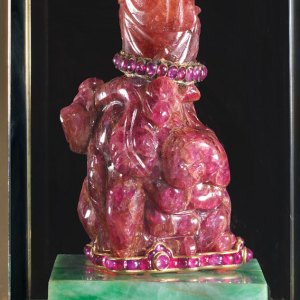 A 15th-century Buddha carved from a 70-plus-carat Burmese ruby.

The tale of the ruby Buddha begins in the 15th century, during the Ming dynasty, when a Chinese artist carved this extraordinary piece from a single enormous Burmese stone. The statuette resided in the Summer Palace in Beijing until 1860, when the British invaded the city and looted the palace during the Second Opium War. Eventually the Buddha fell into the hands of Prince Feliks Yusupov of Russia. When the prince fled his homeland for Paris during the Russian Revolution, he smuggled out the Buddha and sold it through Cartier London to finance his lavish lifestyle. The Buddha was displayed at a Cartier London boutique in the late 1920s and early 1930s and then disappeared from public view until five years ago, when American collector and antiques dealer Fiona Druckenmiller purchased the piece through a Swiss dealer from its owners in South America. Druckenmiller now is offering the precious—and peripatetic—Buddha exclusively to a Robb Report reader.

“There is a lot of mystery around the Buddha,” says Druckenmiller, whose FD Gallery is located on Manhattan’s Upper East Side. “We don’t know how it got from place to place, where it was for many years, and how it managed to stay in pristine condition all this time.”

The piece itself is as intriguing as its provenance. It weighs about 70 carats, is 4.3 inches thick, and stands nearly 7 inches tall on a jade base. The Buddha is rendered in a slightly abstract fashion, with a flowing robe and a waist belt made of cabochon rubies. He holds a box thought to represent Hehe Erxian, the immortals Harmony and Unity who are said to preside over happy marriages. Thus it is assumed that the statue was a gift marking a union within the imperial court.

According to Clive Kandel, director of fine jewelry and silver at 1stdibs, a dealer in antiques, jewelry, and furnishings, Cartier’s presentation case adds to the Buddha’s value. “The designers incorporated a familiar idea to the Russian prince, that of Fabergé’s encasing sculptures within simple glass cases,” Kandel says.

Druckenmiller has displayed the Buddha in her living room for the past few years. “It’s a very personal piece of art—a contemplative piece,” she says.

It is also a mysterious piece. The identities of its owners and its whereabouts during the decades between its appearance at Cartier London in the 1920s and its reemergence five years ago in South America remain unknown. Cartier London displayed the Buddha alongside Blue Venus, a statuette that was carved from a large sapphire and also belonged to Yusupov. But because many of Cartier London’s records were lost, no one knows what became of the Buddha after the piece’s time at the boutique. Now a Robb Report reader can possess this captivating treasure and have the opportunity to write the next chapter of its storied provenance.