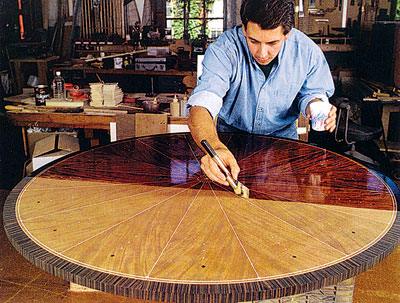 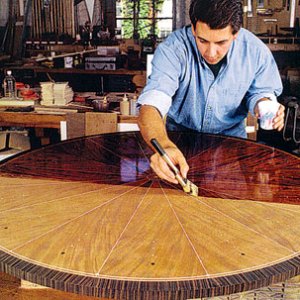 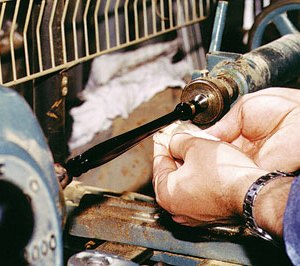 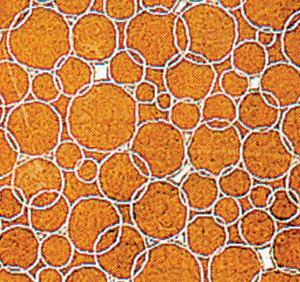 Frank Pollaro adores Emile-Jacques Ruhlmann’s Art Deco furniture, but there are days when he curses the Frenchman’s name, for the details that make a Ruhlmann piece so appealing also make it such a challenge to reproduce. Pollaro, a largely self-taught 38-year-old furniture maker who has crafted more than 100 Ruhlmann replicas at his studio in East Orange, N.J., explains that the designer was just that: a designer. “I think he had the best eye of any furniture designer in history, but he never did any woodworking,” Pollaro says. “He would drive his cabinetmakers crazy by asking for things that couldn’t easily be done.” Decades later, Pollaro, who uses woodworking equipment that mostly was made from 1890 to 1940, feels those craftsmen’s pain. “There are times when I say, ‘My God, this is impossible,’ ” he says, chuckling.

The Elysée sideboard that Pollaro proposes to replicate promises to be one of his most challenging projects because he and his assistant will have to inlay by hand the thousands of ivory circles that appear on its surface. Pollaro says that no one has attempted to remake the unique piece because “there’s no one crazy enough to do it.” The original, completed in 1920 and exhibited at numerous fairs for the ensuing five years, was two years in the making. After it was featured in the French Exposition Internationale des Arts Décoratifs et Industriels Modernes, the 1925 exhibit from which the term Art Deco derives, the French government purchased it for the presidential Palais de l’Elysée, and it now resides in the permanent collection of Paris’ Mobilier National museum.

In addition to employing tools that Ruhlmann’s cabinetmakers would recognize, Pollaro relies on some of the same vendors that supplied the designer with such rare woods as the amboyna burl from which he made the sideboard. (Pollaro assures that he obtains his ivory legally.) Although he estimates that the replica will consume more than a year of his time, Pollaro is eager to begin building it. “I’ve done all the steps many times before, and I’ve done interlocking circles in smaller areas on other pieces,” he says. “I think I’m to the point now where I’m ready for this.”

The sideboard will measure 7.9 feet wide by 6 feet high and 1.7 feet deep.

Almost 2,000 ivory circles, or bubbles, will appear on the sideboard’s face. Pollaro believes the circles on the original were meant to mimic the appearance of a magnified section of stingray skin, a material that Ruhlmann often incorporated in his furniture veneers.

Amboyna burl wood, from which Pollaro will craft this sideboard, is rare but not endangered.

It is grown in Sri Lanka, Thailand, Burma, and other Asian countries and varies in color from light tan to deep orange. Pollaro believes that Ruhlmann liked working with the wood “because of the purity of the grain and the richness of the natural color of the wood.”

Pollaro sometimes relies on antique ivory, because, he says, material harvested at least 100 years ago poses no legal problems (unless it has been modified with newer ivory). He also employs bleached mastodon ivory, which is culled from the remains of a species that became extinct more than 10,000 years ago.

Pollaro decided what he wanted to do with his life in middle school, after taking a woodworking shop class. The Bloomfield, N.J., native first encountered Ruhlmann’s furniture at age 16, when he saw a woodworking magazine cover featuring one of the French designer’s pieces, an ebony cabinet inlaid with ivory flowers. “That looked like what I wanted to create,” Pollaro recalls. “I didn’t know it was French Art Deco, and I didn’t know who Ruhlmann was, but I knew that the juxtaposition of ebony against inlaid ivory was very striking. I did a lot of inlay work after that.” Pollaro enrolled in the Art Institute of Philadelphia to study interior design but left because, he says, “there was not enough hands-on work.” To receive the type of training he wanted, Pollaro took a job at a local cabinetmaking shop before establishing his own shop at the age of 21.

Delivery will require a minimum of 24 months.