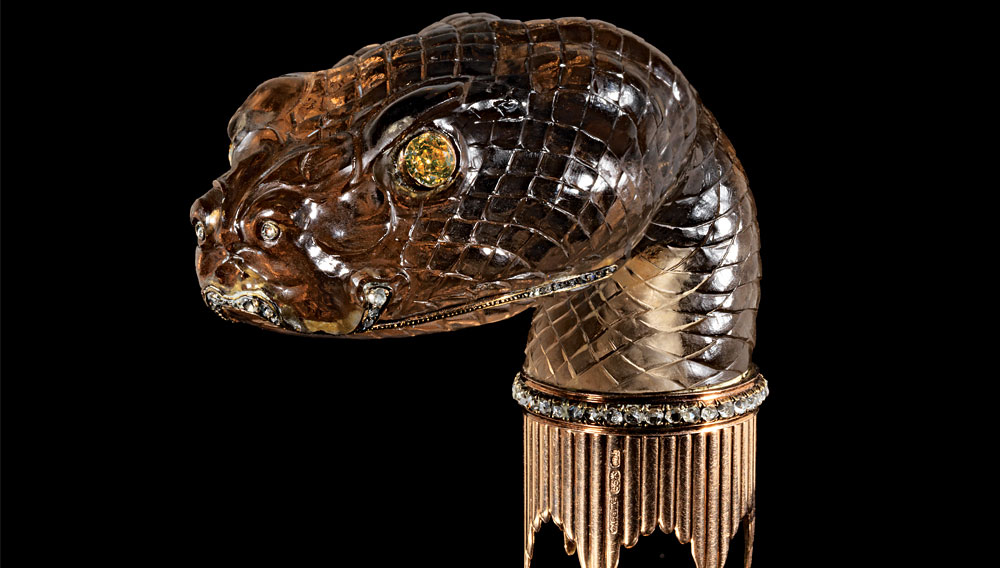 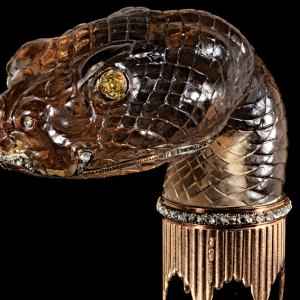 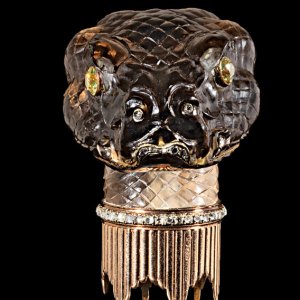 From 1885, when Tsar Alexander III appointed Peter Carl Fabergé the jeweler and goldsmith to the Russian Imperial Court, until 1918, when the Bolsheviks confiscated his company’s inventory, the House of Fabergé created as many as 250,000 pieces in gold, silver, malachite, jade, lapis lazuli, enamel, and gemstones. Among them were the famous Imperial Easter eggs made for Alexander III and his successor, Nicholas II.

Fabergé’s portfolio also included dazzling parures of jewelry and intricate floral and figurative miniatures with elaborate settings. His work with metal demonstrated sufficient skill to impress the notoriously fastidious Alexander III, and in 1897, Fabergé was appointed goldsmith to the courts of Sweden and Norway.

He also designed functional items, some of which were no less spectacular than his jewelry and art objects. These included handles for umbrellas and walking sticks. “Fabergé made a great number of handles, both cane and parasol,” explains Peter Schaffer, the co-owner of A La Vieille Russie, a Manhattan gallery that Schaffer’s ancestors originally established in Kiev in 1851. The business specializes in antique Russian fine and decorative art and antique European and American jewelry.

Schaffer identifies two one-of-a-kind handles, both animal forms, as Fabergé’s finest. One belongs to the United Kingdom’s Prince Charles. “The Prince of Wales has a handle with a frog climbing to its top,” says Schaffer, who surmises that it first belonged to Charles’ great-great-grandmother Queen Alexandra—sister to the Russian empress Maria Feodorovna, who was the wife of Alexander III. In The Lost Fortune of the Tsars, William Clarke writes that both Alexander III and Nicholas II encouraged Fabergé to “turn his genius to the production of further exquisite items for their family and friends.” Prince Charles’ handle might be the result of that encouragement.

Similarly exquisite is the snake handle Schaffer is offering exclusively to a Robb Report reader. Created around 1900, it is mounted in gold and diamonds and features scales fashioned from smoky quartz; yellow diamonds serve as the snake’s eyes and white diamonds, its mouth. “It’s the quality of the carving and the choice of material that make it the best,” says Schaffer, comparing this snakehead to the other two examples he has encountered in a career spanning more than five decades. “The others are in materials that just don’t work: One is nephrite, and the other is a dark, dark quartz. They just sit there, without any life to them. But the quartz on this handle feels like a real snake, in texture and temperature. Touch is very important.”

Little is known about the history of the piece before the late 1950s, when Schaffer’s parents first purchased it. A La Vieille Russie subsequently sold and reacquired the handle twice.

This issue of Robb Report marks only the second time the handle has appeared in a publication. It is featured in 1949’s Peter Carl Fabergé: Goldsmith and Jeweller to the Russian Imperial Court and the Principal Crowned Heads of Europe; An Illustrated Record and Review of His Life and Work, A.D. 1846–1920 by Henry Charles Bainbridge. The author’s inclusion of the handle is especially noteworthy because the book was the first important work on Fabergé and his oeuvre, and because Bainbridge was the head of the London branch of Fabergé. Thus he was well acquainted with the jewelry house’s history and designs.

Schaffer is as enthusiastic about the snakehead handle as Bainbridge was. Although he seldom shows it publicly, he exhibited the handle at last summer’s Masterpiece London, the city’s premier fair for fine art, antiques, and collectibles. “Sometimes you feel like showing off a little,” he says. “Some pieces hit you in the solar plexus and some do not. This one does.”