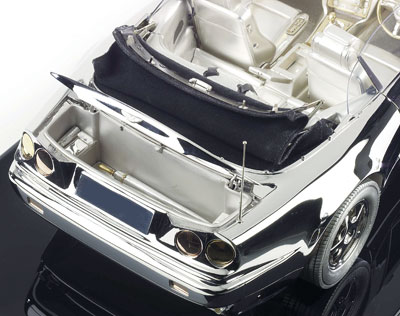 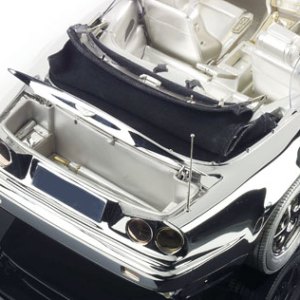 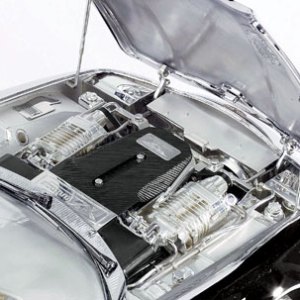 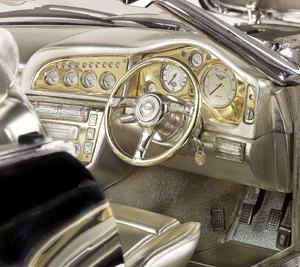 An intricately detailed model of an automobile or superyacht of your choice, crafted by British silversmith Gil Holt.

Upon receiving a commission to fashion in silver a precise model of a new and rare Aston Martin Vantage Volante Special Edition, Gil Holt ran his hands up and down the car’s body, acquainting his fingers with its every curve. Holt’s client, the Volante’s owner, disapproved of the silversmith’s methods. “He did not like anyone touching his car, but I had to do it,” says the 39-year-old director of Anthony Holt Ltd., a Hertfordshire, England, silver company that his great-grandfather, Louis Holt, founded in 1915; the company later was renamed for Gil’s father. “If I was to replicate it to the best of my abilities, I had to do it on my terms. He didn’t like it, but he had to accept it.”

Model cars are a specialty of Holt’s company, which has produced more than 400 during the last four decades. But the Aston model, which represents the type of custom auto or yacht rendering that Holt will craft for a Robb Report reader, is distinguished by its larger size (22 inches long) and its intricate detail. The Aston is made from sterling germanium silver, a harder, more tarnish-resistant form of the precious metal. After he completed the model, Holt covered the silver with rhodium, an element used in platinum alloys, which here imparts a brilliant luster to the car’s body. Holt fashioned the car’s wooden dashboard panels in 18-karat gold, and he made the soft convertible top from mohair, the same material that Aston Martin used for the full-size car’s top. “Aston Martin was fantastic in the help that they gave me,” he says. “There were no proper blueprints for that car, because only eight were made. But they gave me as many plans for the car as they had, and they were invaluable regarding the hood [top]. They gave me the mohair.”

Holt labored for almost two and a half years on the model, unveiling it at the client’s home in 2003. “His wife took him into the room with his eyes closed. I took the cover off the model, and he didn’t say a word. I started to think it was time to run,” he says, laughing at the memory. “I said, ‘What do you think of it?’ six times, and each time he said, ‘Wow.’ I didn’t understand that he liked the car. Finally, I got hold of him and said, ‘What do you think of it?’ and he said, ‘It’s beautiful.’ Then I understood. It was very emotional.”

A model car will require a minimum of two years to complete; a model superyacht, three years.

The model that Holt makes will demonstrate his obsession with details. If you ask him to re-create your car, for instance, and it is a convertible, you may be able to raise and lower the lid, as is the case with his Aston Martin model’s 5-inch-wide mohair top. (Click image to enlarge)

The Aston’s ignition key is a separate piece; Holt included a set of tweezers in a drawer in the model’s base so that the owner could remove it from the ignition. The gas cap also is removable, the engine’s fans spin, and the steering wheel turns the front wheels.

The numbers on the dashboard dials are legible, as are the word’s “Aston Martin Owner’s Manual” that are etched on the spine of the miniature book found in the trunk. The trunk opens, but the pages of the book do not. “I stopped there,” Holt says, laughing. Then he adds, “But if I did another model . . . .”