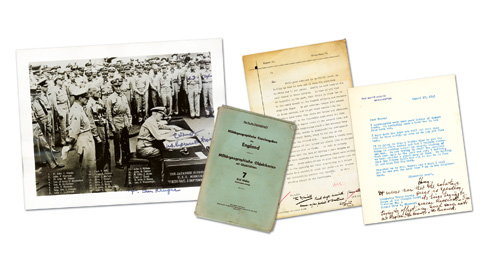 Winston Churchill, Franklin Roosevelt, Dwight Eisenhower, Douglas MacArthur, and virtually every other figure who played a major role in the waging of World War II is represented in a collection of historic documents offered by the Kenneth W. Rendell Gallery in New York. The collection contains a World War I–era typewritten manuscript by Churchill in which he states that “to get American troops into Europe . . . fighting where they share our losses . . . seems to me the foundation upon which the life of our state and empire rests.”

Among the MacArthur items is a 1961 letter in which he discusses being relieved of his command by Harry Truman: “The only excuse Mr. Truman could have for his abuse of me is that it should be true or it should be witty. If it is neither the one nor the other, it becomes mere vulgar scurrility.” Also included are documents and other items associated with Truman, Chester Nimitz, George Patton, George Marshall, Omar Bradley, and Joseph Stalin, who, in a handwritten, 1930 letter, critiques his press coverage in the United States: “I read in an American newspaper about the ‘brutal atrocities’ of the Bolsheviks . . . Funny people these American newspaper publishers. It’s just downright comical . . . They make money with this notion of atrocities.”

A signed 1941 document from Adolph Hitler, marked “Secret” and addressing the demands being made on the German armaments industry, is included with a signed formal portrait photo of the Führer in uniform. Even more chilling are a number of maps of southwestern England from 1941 and 1942, which were designed to familiarize the German military with the terrain in advance of a Nazi invasion.