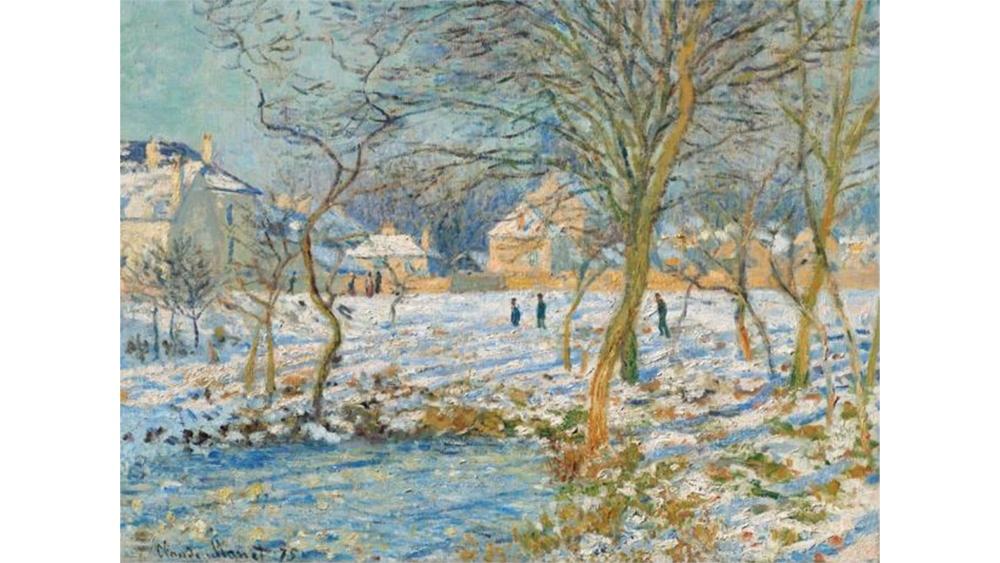 A winter landscape scene by Claude Monet, sold under duress by its original German Jewish owner in the years leading up to World War II, is coming to auction this spring.

The painting, La Mare, effet de neige (1874–75), will be sold next month at Christie’s in New York as part of an evening sale dedicated to art made around the 20th century. As part of a swift legal settlement, proceeds from the sale will be divided between the heirs of Richard Semmel, the work’s original owner, and its current owners, a French family whose members declined to reveal their identity.

Christie’s restitution department facilitated the settlement, whose terms are not being publicly disclosed. When it comes to auction on May 12, it will carry a guarantee, and the work is expected to fetch a price between $18 million and $25 million. Monet’s auction record of $110.7 million was set in 2019 at Sotheby’s New York.

A snowy outdoor scene with figures shown in the distance, La Mare, effet de neige resurfaced when Christie’s was reviewing the work for potential sale from its French consignors earlier this year. Further research into its ownership record revealed the painting was listed on the Art Loss Database, according to a Christie’s spokesperson, prompting an internal flag through house’s restitution department to alert Semmel’s heirs of its whereabouts.

In an interview with ARTnews, Anika Guntrum, Christie’s international director of 20th- and 21st-century art, described that work as “an important art historical document,” given that its date places it as a contemporary with another Monet work, which gave the movement its name Impression, Sunrise (1872), when it was exhibited in 1874.

“In terms of the date and view of the picture, we are at the birthplace of impressionism,” Guntrum said. “It’s a real departure from the Salon style depictions of nature that were commonplace at the time. Impressionism tends to look easy on the eyes and easy to digest, but we have to remember how revolutionary it was at the time.”

Another important aspect is the painting’s setting, the village of Argenteuil, the Paris suburb that was “the original muse for the Impressionist painters,” she said, adding, “All of the senses are at work when you’re standing in front of it.”

The Monet’s original owner, Richard Semmel, was a Jewish textiles manufacturer based in Berlin. He purchased the Monet from a German dealer in 1898. Active in the early 20th century, Semmel amassed an art collection spanning Old Masters to Impressionists and Post-Impressionists, including works by Paul Gauguin, Alfred Sisley and Camille Pissarro.

Prior to Semmel’s ownership, Monet had sold the work at a Paris auction less than a year after it was exhibited in the “The First Impressionist Exhibition” in 1874.

As a member of the opposition German Democratic Party, Semmel was targeted during the Nazi regime’s rise to power. In 1933, he fled Germany to the Netherlands, auctioning off roughly 130 works from his art collection in Amsterdam that year. La Mare, effet de neige, however, went unsold.

The work later came into the hands of a private French owner named Philip Leary, whose autobiographical details are still unknown, around the time of Semmel’s death. It eventually passed on to Leary’s descendants, the current consignors.

Semmel managed to flee the Netherlands in 1939 before the Nazi invasion, arriving in New York in 1941, where he remained until his death in 1950. His only heir was a close family friend and caretaker Grete Gross-Eisenstädt, who died in 1958.

Describing the family of defendants as “extraordinarily cooperative,” Ossmann called the final agreement, “a fair and just solution according to the Washington Declaration from 1998,” referring to a set of standards that art institutions follow in handling restitution claims.

Restitution claims related to Semmel’s collection have been ongoing for the past two decades. Many of his paintings remain at large and ended up in private collections after the 1930s sale, according to Ossmann.

In 2013, his heirs tried to recover Italian artist Bernardo Strozzi’s painting Christ and the Samaritan Woman at the Well (1635) from the Museum de Fundatie in Zwolle. The Dutch museum at first struck down the claim, citing that the work’s importance to the collection outweighed the heirs’ interests. That decision led to a review of the case in 2020 by an independent commission that pressured the museum to reverse its decision. The heirs were subsequently compensated in lieu of the work’s return.

Ossmann said the current case should act as a “catalyst” for collectors to be proactive in researching records for art in their holdings. “These cases should not be limited to works of art that are up for sale,” he told ARTnews. “Some collectors struggle with themselves to face the situation or continue to ignore it.”