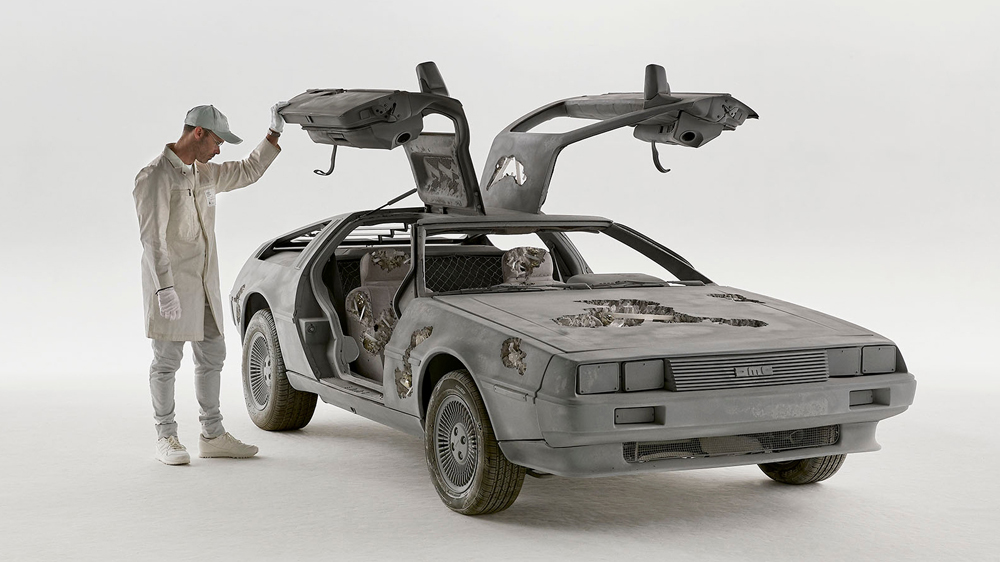 After a long and sultry summer in New York, the art world is once again abuzz, igniting the fall season with a bang this month as a slew of shows open at galleries throughout the city. Among the notable exhibitions on our radar are Liza Lou at the new Lehmann Maupin space in Chelsea, Daniel Arsham at Emmanuel Perrotin’s gallery on Orchard Street, and a surprising show of paintings by the renowned late photographer Irving Penn at Pace/MacGill on East 57th Street. Read on for the shows we think are downright essential.

Lehman Maupin is inaugurating its new Chelsea digs at 501 West 24th Street with a new body of work by Liza Lou. The Los Angeles–based artist is known for her richly textured and color saturated sculptural works crafted largely of glass beads, many of which have been produced with the aid of female artisans in Brazil and South Africa, where she has a studio. For this exhibition a suite of accretive masses is complemented by a site-specific installation, The Clouds, a 100-foot “woven painting” inspired by Les Nuages, a 1922 oil on canvas by Claude Monet. For the installation, the artist executed her plein air painting by applying pale hued pigment to 600 beaded white panels, smashing the colored beads in places once the paint was dry. The works fill two floors of the 8,500-square-foot gallery.

An installation view of Liza Lou’s “The Clouds” (2018), in oil on beaded panel.  Photo: Courtesy Liza Lou and Lehmann Maupin

For Occupation, Adam Silverman’s second show with the gallery, the radical Los Angeles ceramist is presenting two suites of works, one black and one white. Both have been theatrically arranged on “stages” as if the individual clay pots—with their anthropomorphic poses, textures, and appendages—were actors performing in a dance troupe or a platoon of soldiers readying for combat.

Toyin Ojih Odutola still had a year to go to complete her MFA at California College of the Arts in San Francisco when New York gallerist Jack Shainman gave the Nigerian-born, Brooklyn-based artist her first solo show in 2011. For her fifth show at the gallery, When Legends Die, the 33-year-old artist offers a third and final suite of lush, life-size renderings in pastel and charcoal on paper. Collectively, the works chronicle the lives of two fictional aristocratic families that found themselves joined when their two male heirs married.

Beyond the irony that such unions are illegal in Nigeria under the Same-Sex Marriage Prohibition Act, Ojih Odutola’s subjects exude a comfortable nonchalance in the trappings of high society, a place the artist says they would have naturally occupied had Africa been able to escape the demoralizing wrath of colonialism. The first installment in the series, To Wander Determined opened at the Whitney Museum of American Art in October 2017; the second Testing the Name debuted at The Savannah College of Art and Design this past February and is on view there through September 9. Ojia Odutola’s work will also be included in For Opacity, a group show that opens at the Drawing Center on October 12 and runs through February 3, 2019.

Taking his cues from 1980s flicks Back to the Future and Ferris Bueller’s Day Off, New York–based artist Daniel Arsham has turned the gallery into a virtual garage, having transformed the iconic autos featured in the two films into geological features with deep crystalline structures. While still instantly recognizable, the 1981 Delorean and 1961 Ferrari 125GT are presented in a deep state of decay with major portions of their ashen sheet metal having eroded to reveal a mineral core within. Peering into the voids, one sees volcanic ash, pyrite crystal, selenite, and quartz where mechanical parts would have been.

While Irving Penn is known the world over as one of the foremost photographers of our age, few know him as a painter. That is sure to change with Paintings, an exhibition of some 30 mixed-media works executed from the late 1980s until his death in 2009. Drawn from the collection of the Irving Penn Foundation, the collage-like abstract works stand in stark contrast to the smooth style of his photographs—yet both media evince his exacting eye.

Irving Penn’s “Before the Full Moon” (2006), a mixed-media on paper mounted on aluminum.  Photo: Courtesy The Irving Penn Foundation and Pace MacGill