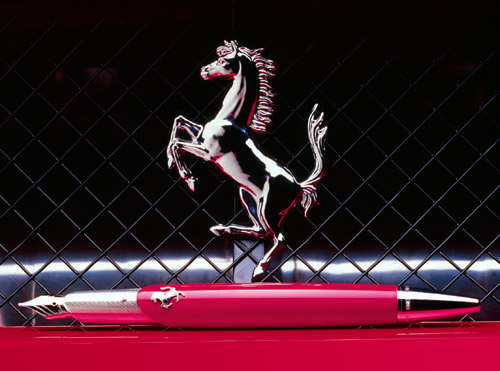 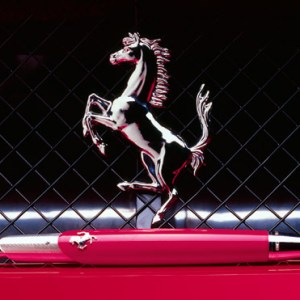 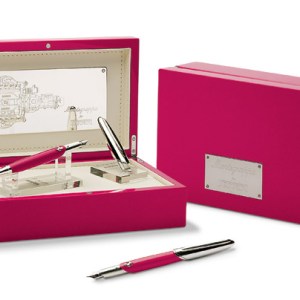 The fountain pen and the stick shift are two 20th-century inventions that hold their appeal for purists. A beautiful writing instrument, after all, affords a tactile satisfaction not unlike the pleasure of a manual gearbox exploiting an engine’s precise power band—a sensation absent from both the soulless keyboard and know-it-all automatic transmission. As these commodities, once indispensable commonplaces, become ever more scarce props of our daily lives, their idiosyncrasies and traditions gather resonance, and their use becomes an occasion to be savored, their best examples heirlooms to be preserved.

That both traditions find safe harbor in Italy hardly surprises: The land that nurtured the Renaissance has remained into the 21st century a bastion of the precision craftsmanship that characterized that intellectual and aesthetic flowering. What may surprise some is the confluence of these distinct traditions in an alliance between two Italian manufacturers—both historic icons—which, for the first time, have joined to create a special instrument for lovers of pens and lovers of sports cars. Montegrappa for Ferrari represents the first collaboration between the renown carmaker and the equally prestigious, but less well-known, maker of pens.

Products that bear the prancing horse from Maranello—apart from the automobiles themselves—are rare. (The signature wristwatches from Girard-Perregaux are notable and delectable exceptions.) Yet the pairing of these Italian firms to develop a limited edition series is a natural one, if only because the two are neighbors: Maranello, famed as the home to Ferrari since the company’s founding in 1947, lies only about 125 miles west of Bassano del Grappa, itself about 50 miles from Venice to the east. Bassano is a charming town on the Brenta River, dating to the 13th century and situated at the foot of Monte Grappa, a mountain with great historic significance to the city’s inhabitants because it was the site of a tragic battle against the Austrians toward the conclusion of World War I. The eponymous firm—not the only pen manufacturer to take the name of a mountain—was established in 1912 in the very factory building in which it thrives today. Exponentially smaller than its Richemont-owned sibling, producing only 40,000 instruments annually compared to Montblanc’s millions, Montegrappa 1912 (as the company is officially called) maintains a commitment to limited production and hand-tooling that makes Ferrari its ideal automotive analogue.

We visited the workshops with our host, Sergio De Bon, president of the company since its acquisition by the Richemont Group in 2000. (Watch collectors will recognize De Bon as the former head of Officine Panerai—another Richemont jewel—during whose tenure the manufacture reestablished its reputation as Italy’s premier watchmaker.) Following him through the winding studios, we came to understand why Montegrappa is ideally suited to create Ferrari’s first official writing instrument. The new owners have fastidiously preserved Montegrappa’s artisanal traditions and techniques, while supporting these values with the resources of the large luxury consortium. Both pen- and carmaker engage artisans of the highest caliber, while simultaneously applying state-of-the-art manufacturing processes where computer-aided design and machining contribute to the end result. Everything about Montegrappa exudes craftsmanship—from the smallest manufactured part, meticulous finishing, and hand assembly to the quality control that ensures every instrument is perfectly formed.

While its colorful celluloid and silver classics are best known, the company has also gained fame for its true limited editions, produced in quantities of typically less than 2,000 for sterling silver and usually less than 100 for 18-karat gold. Auto-inspired masterpieces from the mid-’90s, such as the Tribute to Ayrton Senna and Millemiglia, have long since sold out, and more recent designs celebrating Human Civilization and America’s Cup remain in short supply.

Along with lathe-turning and die-casting, many designs are executed one at a time by a team of two dozen master engravers, who employ chisel and low-relief engraving techniques as precise as those used to engrave paper currency. So while uniform patterns and a master’s hand ensure uniformity from pen to pen, careful examination with a loupe reveals minuscule variations in line and contour. Some designs require more than 20 hours of engraving time, as well as many hours of other labor-intensive manufacture, assembly, testing, and packaging.

Giampiero Bodino, one of the world’s premier designers of men’s jewelry, created Montegrappa for Ferrari. The shape is classic yet contemporary. Its barrel is sleek and suggests speed; the pen’s overall form, with cap in place, articulates one harmonious and unbroken curve. The cap is distinctly shaped, recalling the signature taillight of Ferrari’s flagship Enzo.

In the finest Montegrappa tradition, the tiny prancing horse that adorns each pen is made by hand: A hair-thin saw blade is used to cut each equine ornament from a piece of precious metal, either silver or gold. The silhouette is then filed and the surface textured and finished with burin and graver technique.

The FA Annual Edition, as this first series is named, is available in silver and gold, and both versions receive special alloy lacquered barrels (and cap, in the gold version). The colors, of course, are Ferrari Racing Red or Modena Yellow for silver pens, and red alone for gold. An engraved metal plaque—silver or gold plated—bearing an aerial view of the Modena’s V-8 engine adorns the exquisite red-lacquered case, which is lined with leather (crème for silver and black for gold). One can only hope that Formula One and V-12 editions will follow.

The series is limited to 4,000 instruments, a deliberate quantity that represents the approximate annual production of automobiles from the Ferrari factory. The run comprises seven models including fountain, rollerball, and ballpoint pens in silver with red, and silver with yellow. Of the 4,000, a scarce 150 fountain pens will be made in yellow gold and red. Each pen is numbered.

It will be interesting to learn whether owners of these pens are car lovers first and pen collectors second, or vice versa. Of course, the two passions are not mutually exclusive. There is every reason to believe that a Ferrari enthusiast can derive almost as much pleasure writing an encomium to his favorite car as driving it. And at the very least, he’ll have the perfect pen with which to write a check when the time comes to buy a new one.