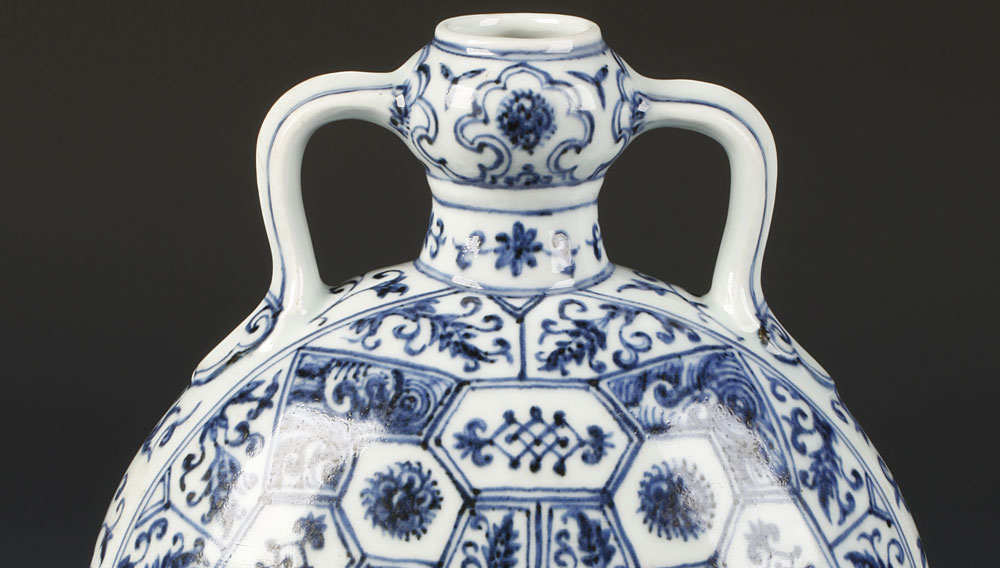 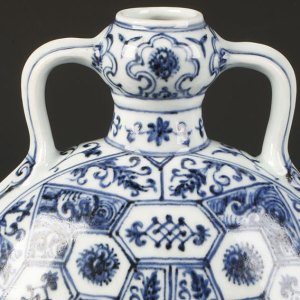 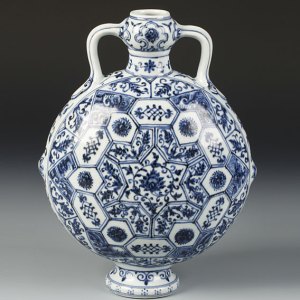 When a blue and white vase showed up at Duke’s auction house in Dorchester, England, in a cardboard box, no one would have guessed it would be a masterpiece dating from China’s Ming Dynasty. The vase, which measured nearly one foot high and was in mint condition, was brought to Duke’s by a Cadbury candies retiree looking to see if it had any worth. Now it is the largest recorded piece from a rarefied group of early Ming moonflasks dating from the Yongle period (1403 to 1424), and it will be sold on May 12th in Dorchester Fine Art Salerooms in Dorset.

The clotted quality of its painted cobalt designs demonstrates the heaped-and-piled technique, a defining characteristic of Ming pottery. The flask’s designs include a cascade of clouds at its neck, painted sects of lattice, and a central six-pointed star reminiscent of Islamic glass and metalwork. This marriage of Middle Eastern shapes with Chinese decorative techniques, due to Ming China’s trade relations with the Mamluk Empire of Egypt and Syria, is expected to attract major collectors from both Asia and the Middle East.

Not much is known about the man who acquired the vase, or how much he paid for it, but market insiders project that among its rarities, its remarkable preservation, and its size, the Ming moonflask will sell for more than $1.5 million this May. (+44.13.0526.5080, www.dukes-auctions.com)

The Victoria and Albert Museum Has Returned a Looted 4,000-Year-Old Object to Turkey