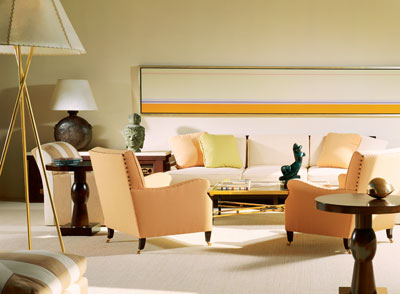 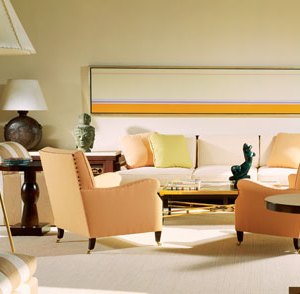 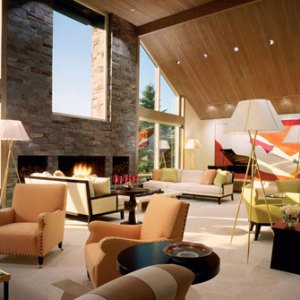 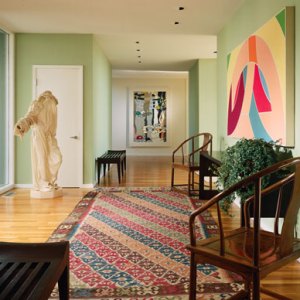 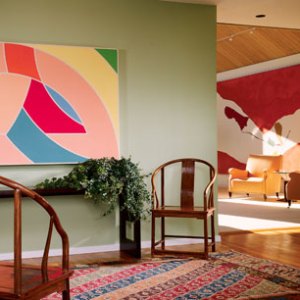 The abstract expressionists were an extravagant bunch who lived intensely and painted on a scale that matched their egos and bravado. One of the most bombastic among them, Clyfford Still, once complained, “To be stopped by a frame’s edge is intolerable.” Not even the universe, it seemed, could contain their vision. And yet, paradoxically, the artists intended that their oversize pieces be displayed not in museums, but in spaces sufficiently large to accommodate them and still intimate enough for the art to confront and envelop viewers. While designing the interior of a client’s summer house in East Hampton, N.Y., Geoffrey Bradfield encountered such a space—small compared to a museum but immense for a living room—and acquired a painting to fit it. “What makes this house so out of the ordinary is the scale,” says Bradfield. “That living room is absolutely cavernous.” And it proved an ideal place to hang Copper Afternoon, a 24-foot-long-by-8-foot-high painting by Helen Frankenthaler, one of Abstract Expressionism’s most famous second-generation artists.

Designed in the 1970s by architect Milton Klein, the 12,000-square-foot modernist house is set on 16 acres of oceanfront property and affords commanding views of the Atlantic Ocean. Since 1980, Bradfield has designed the interiors of numerous other residences for the owners—an investment banker and his wife—and their children. The clients, avid collectors of postwar art, already possessed works by Fernand Léger, Alexander Calder, Lee Krasner, and Romare Bearden, among others, as well as prewar paintings by such artists as Jean Metzinger and Tamara de Lempicka. “I wanted the house to showcase the art, yet I also wanted it to be beachlike and comfortable,” explains Bradfield. Large-scale abstract pieces, he determined, would provide a graphic impact and appear less formal than groupings of smaller paintings arranged along the vast walls. The designer worked closely with the couple’s art advisers to acquire pieces tailored to the feel and proportion of the spaces.

Although the first artwork purchased was an 18-foot-long Kenneth Noland painting, Frankenthaler’s Copper Afternoonestablishes the tone for the interior design of the residence. Throughout the house, Bradfield maintained a soothing monochromatic palette that does not compete with either the art or the views, but he also added what he calls “pungent accents of color”—soft cantaloupe and chartreuse—drawn directly from Frankenthaler’s canvas.

The luxury of space may be ideal for monumental art, but it also can make living areas appear as though they are parts of a hotel lobby. Bradfield addressed this potential problem by creating multiple seating areas that relate to each other through variations on the same color scheme. In one place, wide-striped, sand-and-cream-colored chairs are paired with chairs upholstered in cantaloupe-hued fabric, while in another they share the space with armchairs swathed in chartreuse. In the central seating arrangement, both accent tones appear in throw pillows on custom-designed cream sofas by Christian Liaigre.

Tripod lamps of 24-karat-gold-leafed iron, topped by parchment shades that have been whipstitched with leather, illuminate the living room. Bradfield says their tepee shape and leather lacing are subtle references to the many Native American names—Sagaponack, Apaquogue, Amagansett—that identify landmarks and towns of Long Island’s South Fork. Various tables placed around the room have the sculptural quality of Brancusi works.

All of these seating areas embrace a quintessential Hamptons landscape of dunes and ocean, which is visible through a wall of glass bisected by a massive fireplace that resembles a stacked-stone sculpture. “On the ocean side,” Bradfield says, “nature is the art canvas in the room.”

Besides the paintings, the only expansive planes of color are the walls in the entry hall, which are painted seafoam green. This not only delineates the space—separating it from the sprawling, open plan of the house—but also highlights a colorful Frank Stella canvas and Roy Lichtenstein’s Lily Pond, a painting on Mylar that hangs at the far end of the hall.This foyer exemplifies Bradfield’s signature style. “I have a great affinity for our time,” he explains. “I like my interiors to represent our moment in history. I have a 20th-century point of view, so while I like using antiques, I use them in a way that they take on the feeling of sculpture.” Here that quality is embodied in antique Chinese chairs made of huanghuali, a rare wood used to craft furniture for China’s imperial dynasties, complemented by a 19th-century Mongolian rug.

The same deft mixing of periods also is evident in the dining room, where Bradfield has combined modern cane-back chairs and a minimalist marble console with Georgian brass candlesticks and a pair of late-19th-century Japanese screens depicting the emperor’s royal stables. Because this is the only room not facing the ocean, the designer employed warm earth tones and upholstered the walls in soft watermark linen.

Bradfield is known for such subtle touches, as well as for an insouciant wit, which is apparent in the master bedroom—another study in monochrome with ocean views. “I wanted it to feel really 1950s,” he says. But while other designers might have deployed Saarinen or George Nelson furnishings to convey this impression, Bradfield merely carpeted the floor in acid green and added whimsical lamps with tall, narrow shades. “Don’t they [the lamps] remind you of a Doris Day movie?” he asks with a chuckle. In the breakfast room, the striped fabric on the Mies van der Rohe chairs recalls streaks of similar colors in a Larry Poons painting, and just outside, a bronze sculpture by Ju Ming appears as though it could be ancient, but it is actually part of a contemporary series of Cubist figures in tai chi poses.

Although Bradfield’s playful wit is apparent throughout the East Hampton home, the masterful manner in which he has highlighted and complemented the owners’ art collection truly underscores his talent. Barnett Newman, a seminal Abstract Expressionist, once said, “A painter is a choreographer of space.” In the space of this house, artwork created by the artists to overwhelm may be the dominant decorative element, but the choreography is unmistakably Bradfield’s.