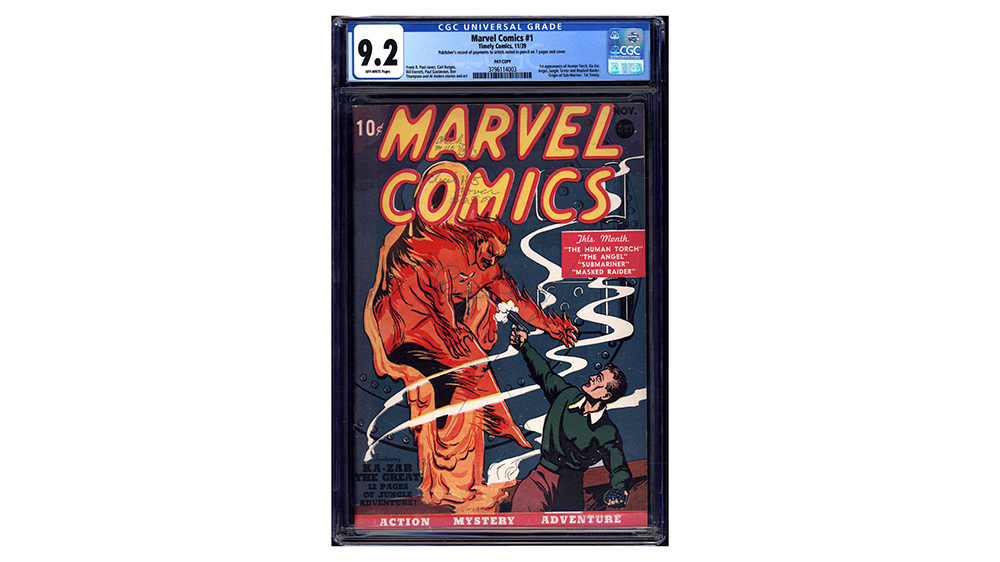 An anonymous collector bought a rare publisher-annotated copy of Marvel Comics no. 1 for a whopping $2.4 million from ComicConnect late last week, reports The New York Times. The hammer price easily shattered the previous record for the comic that planted the first seeds for the Marvel Cinematic Universe more than 80 years ago.

The 68-page booklet was released in October 1939 back when the publisher was known by its first name, Timely Comics. Published more than 20 years before Stan Lee and Jack Kirby created the Fantastic Four, Spider-Man, Avengers and X-Men in quick succession, the comic stars two characters likely to be unfamiliar to the company’s modern-day fans: the original Human Torch and Namor, the Submariner. Despite its lack of star power, the book was a hit. Timely printed 80,000 copies the first month and 800,000 the month after.

This example of Marvel Comics no. 1 is of particular note because it is a pay copy. The publisher used it to record payments due to the artists who worked on the book, like Frank R. Paul who drew the cover for $25 (or just over $510 in today’s dollars). It’s also in tremendous condition despite being more than 82 years old, having received a 9.2 grade from the Certified Guarantee Company. Those two facts may account why it easily beat the previous record sales price for the book. A 9.4-grade copy sold for $1.26 million in 2019.

As jaw dropping of a sum as $2.4 million may be, it’s a way off the all-time record. That title currently belongs to a 9.6-grade copy of Amazing Fantasy no. 15—the comic that introduced Spider-Man and his alter-ego Peter Parker to the world—which sold for $3.6 million last September. The copy of Marvel Comics no. 1 slots in at number four, though, behind that book and two copies of Action Comics no. 1, which features the debut of Superman.

This example of Marvel Comics no. 1 is out of reach for most of us, but there are still ways to read it. You can buy a digital copy for $2, as Gizmodo points out, or read it through the company’s Unlimited subscription service for $9.99 per month.