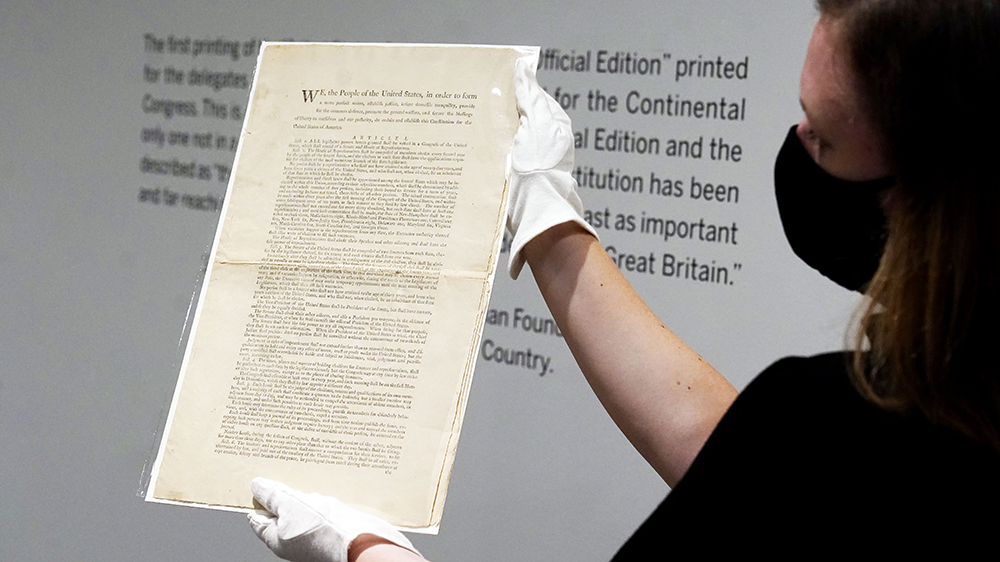 We’ll soon find out just how big of a price tag you can put on US history.

This November, Sotheby’s will auction off a first-edition printing of the US Constitution as part of a sale of historic documents belonging to Dorothy Tapper Goldman, reports CNN. One of only 11 copies still in existence, the document could fetch as much as $20 million.

Drafted during secret meetings in Philadelphia in 1787, the Constitution of the United States’s seven articles outline the framework of American democracy. This particular copy is one of 500 unsigned “official editions” based on the document’s final text, each of which were distributed to delegates of the 1787 Constitutional Convention and Continental Congress. Of the 11 that survive to this day, this is the only one in private hands.

In this case, those hands belong to Goldman, a New York-based philanthropist. She received the important document from her late husband, Howard, a real estate developer and noted collector of historic documents, autographs and memorabilia. He originally purchased the rare document—which Dorothy called one of his “dearest possessions”—from a Philadelphia-based private collector in 1988 for $165,000. In the three decades since, the copy has been loaned out and displayed at several cultural institutions around the country, including the US Supreme Court and New York Historical Society.

A closeup of the Goldman Constitution  Sotheby's

“The Goldman Constitution ranks as one of the most rare and coveted historical documents that has ever come to auction,” Sotheby’s Selby Kiffer, who also handled the 1988 sale, said in a statement. “We are honored to present this incredibly important printing of the Constitution to the public timed to coincide with Constitution Day, which only further reinforces Mrs. Goldman’s longstanding commitment to supporting civics education.”

The first-edition copy of the Constitution, which is said to be rarer than a signed Declaration of Independence, is expected to sell for between $15 million and $20 million in a two-part sale of Dorothy’s historical documents. The first part, when the Constitution is scheduled to go up for bid, is a live auction that will be held in New York on November 23, while the second part is an unreserved online sale that runs from that day until December 2. The document will go on display Los Angeles, Chicago and Dallas, before returning to the Big Apple in time for the auction.